At a meeting of parties ahead of the Monsoon Session of parliament, the DMK and AIADMK demanded that India intervene in Sri Lanka. 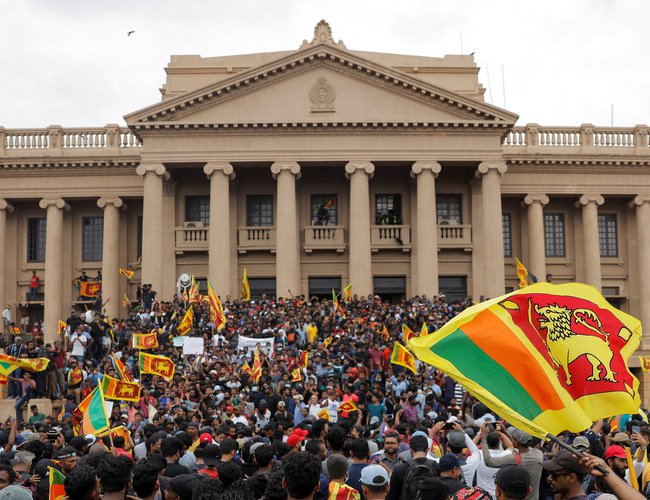 An all-party meeting on the turmoil in Sri Lanka has been called on Tuesday evening, with briefings by Union Ministers Nirmala Sitharaman and Dr S Jaishankar, the government said on Sunday, following appeals by Tamil Nadu-based parties to intervene in the crisis.

At a meeting of parties ahead of the Monsoon Session of parliament, the DMK and AIADMK demanded that India intervene in the neighbouring country which is facing its worst economic emergency in seven decades, news agency PTI reported.

Both parties raised the condition of the country's Tamil population, M Thambidurai of the AIADMK, which is part of the ruling coalition at the centre, and TR Baalu of the DMK, which governs Tamil Nadu, said.

Apart from sending aid via various channels, India has so far maintained a hands-off role in the crisis. Last week, in a carefully worded statement, the Ministry of External Affairs said, "India stands with the people of Sri Lanka as they seek to realise their aspirations for prosperity and progress through democratic means and values, established institutions and constitutional framework."

Pointing to the financial aid that India extended to the island nation, the statement said Sri Lanka occupies a central place in its Neighbourhood First policy. "India is Sri Lanka's closest neighbour and our two countries share deep civilisational bonds," it added.

Sri Lanka's protest movement reached its 100th day Sunday, having forced one president from office and now turning its sights on his successor as the country's economic crisis continues.

Gotabaya Rajapaksa fled his palace shortly before demonstrators invaded it last weekend and on Thursday resigned from the presidency.

His mismanagement is blamed for Sri Lanka's financial turmoil, which has forced its 22 million people to endure shortages of food, fuel and medicines since late last year.

Under Sri Lanka's constitution, Prime Minister Ranil Wickremesinghe was automatically installed as acting president following Rajapaksa's resignation, and is now the leading candidate to succeed him permanently in a parliamentary vote next week.

Numbers at the protest site have diminished since Rajapaksa's exit, and the demonstrators have vacated three key state buildings they occupied -- the 200-year-old presidential palace, the Prime Minister's official Temple Trees residence and his office.

Wickremesinghe has ordered the military and the police to do whatever it takes to ensure order, and defence officials said additional troops and police will be poured to the capital on Monday to bolster security around parliament ahead of the vote.