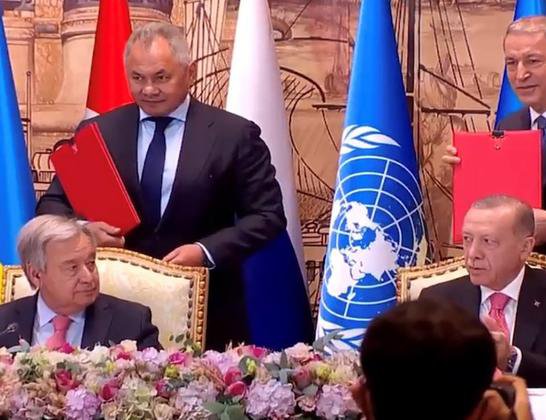 Negotiators from Russia and Ukraine have reached a deal that will clear the way for tens of millions of tons of grain to be shipped from Ukrainian ports on the Black Sea.

Mediators from the United Nations and Turkey helped in the negotiations, which were concluded on Friday in Istanbul.

The halt in grain shipments due to Russia's invasion of Ukraine has threatened the food security of people around the world.

UN Secretary-General Antonio Guterres said, "Today, there is a beacon on the Black Sea. A beacon of hope, a beacon of possibility. A beacon of relief in a world that needs it more than ever."

Guterres said the agreement will free up shipments from the three key ports of Odesa, Chornomorsk and Pivdennyi. UN officials also said an agency will be set up in Istanbul to help implement the deal.

Ukrainian President Volodymyr Zelenskyy sees the agreement as "another sign that his country can withstand the war." He said the deal offers a chance to reduce the severity of the food crisis, with about 20 million tons of grain to be exported, worth 10 billion dollars.

However, he warned against Russian provocation and attempts to discredit Ukrainian and international efforts.

The two sides will review the deal in 120 days. They have agreed to stop attacks against port facilities and cargo ships during that time.