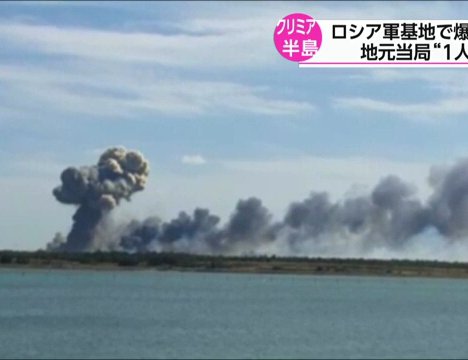 Media reports say explosions have rocked a Russian air base in Crimea, a region in southern Ukraine that was unilaterally annexed by Russia eight years ago.

Outlets including Russian state-run media and the Reuters news agency on Tuesday reported on a series of blasts and rising pillars of smoke on the peninsula.

Russia's defense ministry announced that explosions occurred at the airfield in the western part of Crimea. The ministry denied the base had been shelled, insisting that the blasts were the detonation of aviation ammunition.

Local Russian authorities told state-run media that one person had been killed in the blasts.

Ukraine's defense ministry wrote on Facebook on Tuesday that it could not establish the cause of the fires.

The blasts come as Ukraine's forces continue their counterattacks in the country's south. Russia has repeatedly warned against attacks on Crimea.

In eastern Ukraine, the advance of Russian forces has stalled as they try to take control of the region.

Russia's defense ministry said on Tuesday that its forces conducted missile attacks and destroyed command centers, ammunition depots and other targets in the eastern region of Donetsk and the southern regions of Mykolaiv and Kherson.

The British defense ministry noted in Tuesday's intelligence update that "Russia has not been able to generate capable combat infantry in sufficient numbers to secure more substantial advances."

The ministry said, "Over the last 30 days, Russia's assault towards the town of Bakhmut has been its most successful axis in the Donbas; however, Russia has only managed to advance about 10km during this time."

It added, "In other Donbas sectors where Russia was attempting to break through, its forces have not gained more than 3km during this 30 day period; almost certainly significantly less than planned."

A senior US official has suggested that Russia has seen a "tremendous" number of casualties since the country's invasion of Ukraine began in February.

US Undersecretary of Defense for Policy Colin Kahl told reporters on Monday that the Russians have probably had 70,000 or 80,000 casualties in less than six months.

He described the number as "pretty remarkable considering that the Russians have achieved none of Vladimir Putin's objectives at the beginning of the war."