It Takes A Community To Deal With Dengue 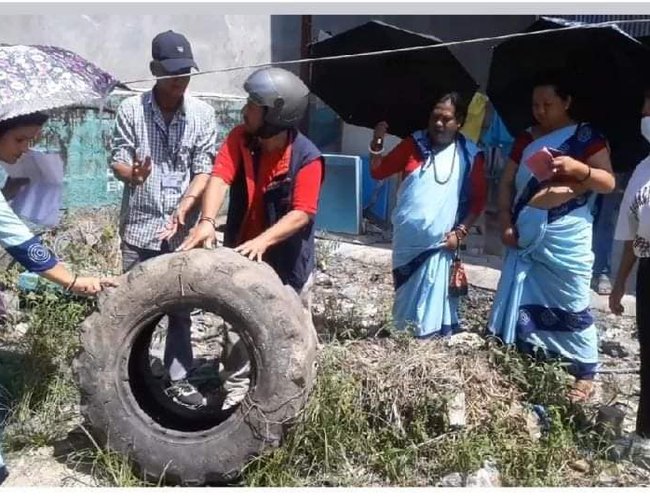 It takes outbreaks for people to sit up and notice the impacts of microbes on their lives. Since 2020 people all over the world have been affected by the novel Coronavirus. The Covid outbreak is still among us. The new Sars-Cov-2 virus first detected in Wuhan of China quickly spread across the globe. In Nepal, too, over 1 million people have tested positive to this virus and over 12 thousand have lost their lives.

There is one big difference between covid-causing and dengue virus. The coronavirus is transmitted from human to human whereas the dengue virus needs a vector to be transmitted – in this case Aedes aegypti mosquitoes.

Despite this difference, there are similarities regarding the prevention, detection and treatment. Proper attention towards individual hygiene, and habits can help in the prevention of both diseases to a large extent.

The dengue virus was first detected in Nepal in 2004. Ever since, the case load in the subsequent years have continued to increase in a cyclical pattern.

The last big outbreak of dengue in Nepal was seen in 2019. That year more than 18 thousand people were infected by the virus.

This year, the outbreak of dengue appears to be on track to break that record. This week the total number of people infected by dengue has reached around 17 thousand already. The spread is still unabated. Nearly two dozen people have already lost their lives since July.

The months of September and October can still provide the virus with enough time to cause havoc to our communities before the drop in temperature brings the much-needed respite.

It takes a community to deal with dengue. From surveillance to prevention and from detection to treatment, the outbreak cannot be controlled by the actions of health authorities alone.

Dengue virus is transmitted by female mosquitoes Aedes aegypti. The mosquito is not the main cause of this disease, but only a vector for transmission.

And herein lies the opportunity for the community to intervene. If the community acts collectively to control the vector, the infection can be significantly controlled.

In some of the South Asian countries like India and Bangladesh, the communities were mobilized to disrupt the life-cycle of the mosquitoes. In Delhi, the local government even organized Sunday weekly campaigns urging the people to check their terraces and surroundings for mosquito-breeding places.

In Nepal also, we need coordinated action at community level for similar ‘search and destroy’ campaigns to destroy the larvae of the mosquito. It can be done by searching for any place where the mosquitoes can breed.

The authorities, particularly the municipalities, need to involve youths in these activities. The students and youngsters can be mobilized to raise awareness in the community and take collective actions.

Typically, the mosquito breeds in any pool of clean water that is left unattended. Therefore, it is important for the community to search for such places and remove such waters. Even small utensils with small quantity of water may be enough for the mosquitoes to multiply.

On top of that wearing full-sleeved clothes, using mosquito repellants and nets to prevent mosquito bites can significantly reduce the chances of catching the infection.

Once infected, the disease is self-limiting in most cases. People can generally recover in their homes but in some cases they require medical intervention.

During the time of outbreak, the community needs to be involved even in detection and treatment. The local governments like municipalities can set up detection centers and provide temporary camps for treatment. This is important because otherwise the hospitals will become crowded and patients suffering from many other serious illnesses may have to be denied crucial treatment.

Why is Dengue so serious?

Dengue continues to spread rapidly because of population growth, rapid urbanization and climate change. It is one of the top ten public health threats, according to the WHO.

The global health body estimates that more than 3.9 billion people are at risk of suffering from dengue fever. It is endemic in 129 countries, with about 70% of cases in Asia.

About 0.4 billion people are affected by dengue each year and among them, symptoms are seen in about 0.1 billion people. More than 40,000 people die every year because of dengue. Most dengue cases are not reported because many cases are asymptomatic, mild and self- managed or misdiagnosed.

Dengue in Nepal has been reported in all climatic and weather situations. The cases have been reported mostly from areas where water can be collected and remains stagnant, which is a perfect breeding ground for dengue carrying mosquitoes. With an exception of around two years during the covid when Nepal saw a drop in cases, the rate of dengue in Nepal occurs and fluctuates every couple of years.

As Nepal faces another season of dengue outbreak it is important to note that this pattern is likely to repeat in the coming years. Thus, it is important for the community to collectively work to fight this menace. The health authorities need to facilitate the coordination at community level with knowledge on prevention, detection and treatment.