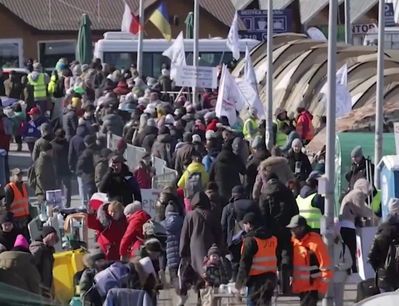 Russian leaders are moving ahead with plans to hold referendums in regions of Ukraine where they have installed their own officials.

Former President Dmitry Medvedev, who is second only to President Vladimir Putin on Russia's Security Council, said "there's no going back."

Medvedev has been overseeing the areas and posted on social media that they "will be accepted into Russia." The regions include Donetsk and Luhansk to the east, Zaporizhzhia to the southeast, and Kherson in the south. Altogether, they cover about 15 percent of Ukraine's territory.

Russian forces have failed to take full control any of the areas. Still, they are planning to hold the referendums from Friday through Tuesday.

The Russia-installed voting chief in Donetsk inspected the polling stations and promised that the process would be "transparent." Russian leaders used the same tactic to annex the Crimean Peninsula in 2014.

Residents worried about an escalation of violence are trying to escape. They piled into cars and thronged the border between Russia and Georgia.

Meanwhile, hundreds of men who are part of Putin's new mobilization are already leaving their homes. Some say they were given just a few hours' notice before being drafted.

Protests have spread across Russia, and more than 1,000 people have been arrested.

Over 1,500 Die In Devastating Earthquake In Turkey By Agencies 5 hours, 37 minutes ago