Navratri 2022: Ghatasthapana, The Day Of Shailputri

Navratri 2022: Ghatasthapana, The Day Of Shailputri 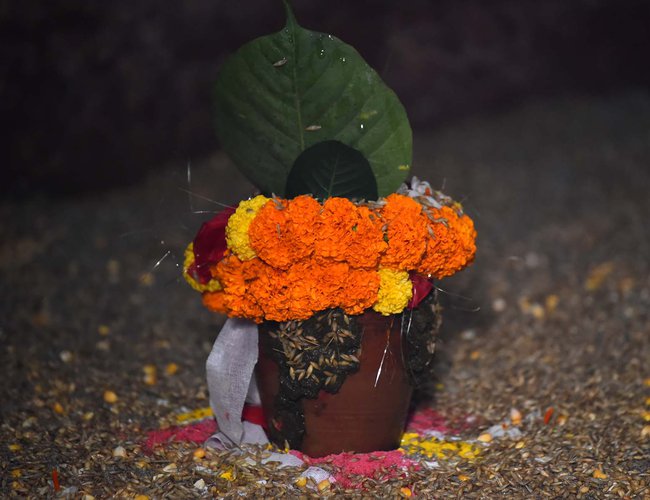 This year, Navratri begins on September 26 and will culminate with Vijayadashami on October 5. Today is also the day for ghatasthapana for invoking the goddess and ushering in the festivity will happen on the first day. Hindus in Nepal and India celebrate Ghatasthapana as an important day.

Ghatasthapana is also known as Kalash Sthapana or Kalashsthapana. You might also be interested in complete Shardiya Navratri Calendar and Durga Puja Calendar.

Navratri 2022 puja vidhi, samagri, mantra, procedure: Navratri is an important festival celebrated in India and around the world by the Indian diaspora, mainly the Hindu community, which invokes the nine different avatars of Goddess Durga for nine nights.

This year, Navratri begins on September 26 and will culminate with Vijayadashami on October 5. The ghatasthapana or the placement of the auspicious kalash for invoking the goddess and ushering in the festivity will happen on the first day, that is September 26 which is Shailputri puja, the first avatar.

According to the Hindu calendar, the festival is celebrated in the month of Ashwin, which typically falls in September or October, according to the modern Gregorian calendar. People buy new clothes, make elaborate decorations at home, fast diligently for nine days and take part in dancing and like activities.

It is also believed that Lord Rama had defeated King Ravana in the battle of Lanka before returning to Ayodhya after an exile of 14 years. People, therefore, burn the effigies of Ravana and his brothers Meghnad and Kumbhakaran on the last day of the festival, which is Dussehra.