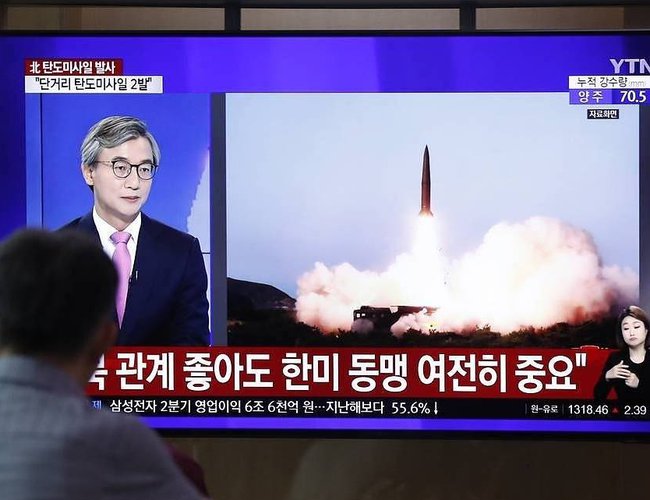 South Korea's Joint Chiefs of Staff said the missiles were launched eastward from Sunan, near the capital Pyongyang, between 6:45 and 7:03 a.m.

The South Korean and US militaries are analyzing the travel distance and altitude of the missiles.

North Korea also fired two short-range ballistic missiles from Sunan toward the Sea of Japan on Wednesday. It has now conducted launches on 22 occasions this year.

This week, they held joint drills in the Sea of Japan for four days through Thursday.

She said after the visit, "In the North, we see a brutal dictatorship, rampant human rights violations and an unlawful weapons program that threatens peace and stability."

On Friday, Japan's Maritime Self-Defense Force and the navies of the United States and South Korea held a joint exercise in the Sea of Japan.

Meanwhile, North Korea has refused to negotiate on denuclearization and has been accelerating its nuclear and missile development. It adopted a law on the use of nuclear weapons last month.

The country's leader Kim Jong Un said in a speech on the occasion that its status as a nuclear weapons state has become "irreversible." He also said Pyongyang would never surrender its nuclear weapons.

China Partially Lifts Lockdown In Southern City of Guangzhou After Protests By Agencies 16 hours, 3 minutes ago