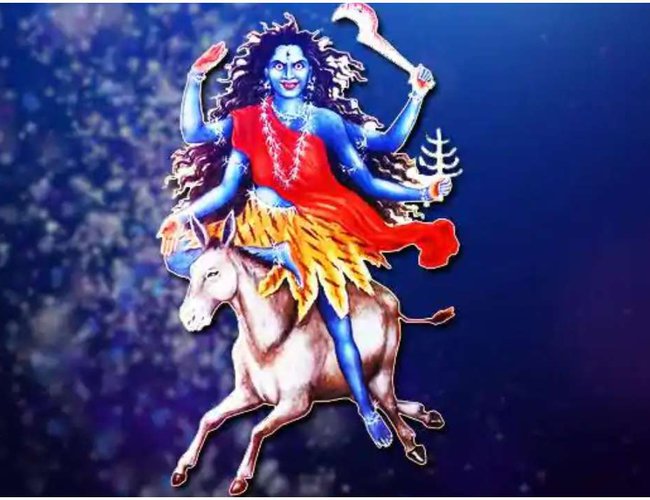 Goddess Kalratri is the one of the fiercest forms of Durga and her appearance itself evokes fear.

Kalaratri is depicted as having four hands and her vehicle, or mount, is a donkey. She can curse and bless and is known to create havoc. This form primarily depicts that life also has a negative side – Tamas.

Kalaratri Saptami puja is held on Ashwin Shukla Paksha Saptami or the seventh day during the waxing phase of moon in Hindu lunar calendar.

Kalratri Mata is worshipped on the seventh day of Navratri. She is considered quite a violent form of Maa Parvati. Her name means: ‘Kaal’ - time/death & ‘Ratri’ - night. As per her name, she is considered as the destroyer of darkness.

Goddess Kalratri has dark black complexion. She rides on a donkey. The Goddess has 4 hands; both right hands stay in Abhaya and Varada Mudra; and the left 2 hands carry sword and a hook weapon.

As the legend goes, there were 2 demons - Shumbha and Nishumbha, who had captured the entire Devlok (holy abode of Devas). The King of the Gods, Indra was defeated badly. In order to get their home back, they sought help from Maa Parvati. While they were explaining the entire story to her, she was bathing inside. In order to help them, she sent Chandi to help them.

When Goddess Chandi went to the demons for war, Shumbha and Nishumbha sent Chanda and Munda to fight. Hence, she created Maa Kalratri to kill them. After killing them, she got the name Chamunda. After that, Raktabeej arrived. This demon had the capability of recreating his body with his blood. Everytime Goddess killed him and his blood spilled on the ground, the demon made a new body for himself. So, Kalratri Durga decided to drink all his blood, so that nothing drops down on the floor; and it actually worked!

There are many other legends associated with Kaalratri. One of them tells how Maa Parvati became Durga. As per that legend, the demon Durgasur was trying to attack Kailash (the holy abode of Shiva-Parvati) in the absence of Maa Parvati. So, she sent Kal Ratri for dealing with him. The guards of the demons tried to attack Kala Ratri, but she grew bigger and bigger in size. Eventually, she got too powerful to handle. Durgasura had to leave, but Maa Kalratri told him that his death is near. Another time when Durgasur tried to attack Kailasha, Maa Parvati fought with him and killed him. Hence, she got the name Durga.

Planet Saturn (Shani) is ruled by the Kalratri Mata. Worshipping her helps in pacifying the ill effects of this planet.