Vaikuntha Chaturdashi 2022: The Day Of Worshiping Shiva And Vishnu Together

Vaikuntha Chaturdashi 2022: The Day Of Worshiping Shiva And Vishnu Together 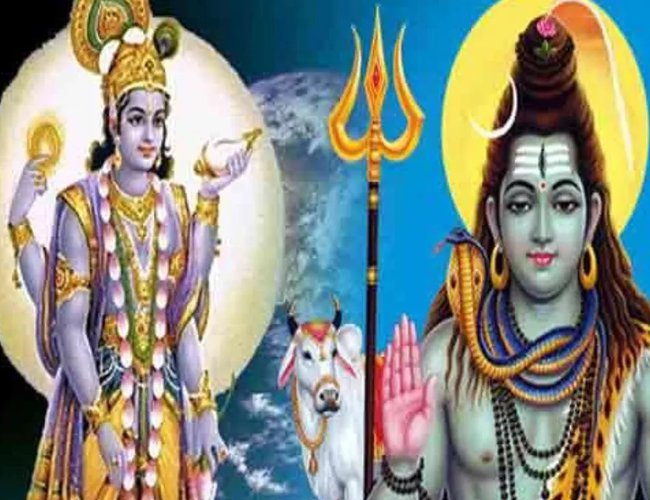 What is Vaikuntha Chaturdashi?

Worship Lord Shiva only in Brahma muhurta before sunrise on Nov 7.

The worship of Lord Vishnu on the day of Vaikuntha Chaturdashi is said to be very important. If you worship him in proper rituals and muhurat, you will surely get the desired result. For the accomplishment of all your works, you must do Rudrabhishek worship along with the worship of Vishnu Sahasranama.

This festival, which falls on the Chaturdashi of Shukla Paksha of Kartik month, is considered equally consecrated for both the Shaivites (worshippers of Lord Shiva) and Vaishnavas (worshippers of Lord Vishnu). On this day both the gods are worshipped and their blessings are taken. The festival of Vaikuntha Chaturdashi is celebrated with great enthusiasm all over the country including Rishikesh, Gaya, Varanasi, etc.

According to scholarly astrologers, by keeping a fast and worshipping the lord ritually on this day of Vaikuntha Chaturdashi, all the wishes of the devotees get fulfilled and could attain Moksha after the death. Lord Vishnu is worshipped during Nishita Muhurta on Vaikuntha Chaturdashi, which generally falls during midnight.

As per the ritual, devotees recite a thousand names of Lord Vishnu, Vishnu Sahastranama, and offer one thousand lotuses to Sri Hari Vishnu. Both Lord Vishnu and Lord Shiva are worshipped on the day of Vaikuntha Chaturdashi. However, this puja is performed at two different times of the day. Devotees of Lord Vishnu prefer to worship in Nishita Muhurta, which is midnight whereas the devotees of Lord Shiva prefer to worship in the Arunodaya Muhurta, which is just before the sunrise.

For Shiva devotees, the morning bath during Arunodaya at Manikarnika Ghat in Varanasi is very important and the holy dip of this day is known as Manikarnika Snan on Kartik Chaturdashi. The worship of Lord Vishnu and Shiva is said to be very important on this day. One needs to be especially careful about the Muhurta.

One needs to follow the Vedic methods for the rituals of worshipping on Vaikuntha Chaturdashi. On this holy day of Vaikuntha Chaturdashi, wake up in the Brahma Muhurta and take a bath. Post that, one must take the pledge for fasting. Throughout the day, one should not eat any grains. Only fruits can be consumed. Worship Lord Shri Hari Vishnu in Nishita Muhurta with lotus flowers at midnight. Chant the below mantra during the prayers

On the day of Vaikunth Chaturdashi, visit either a Vishnu temple or Shiva temple around your place and offer fruits, flowers, garlands, incense, lamps (Diya), etc. to the Lord. According to your reverence, chant any mantra or chant the Mahamantra of Lord Vishnu, Om Namo Bhagwate Vasudevaya (ॐ नमो भगवते वासुदेवाय), or the Shiv Mahamantra, Om Namah Shivay (ॐ नम: शिवाय). After the worship, do some donations and seek blessings from God for the fulfilment of your desires.

Once worshipping Shri Hari Vishnu is done at midnight, worship Lord Shiva in Arunodaya Muhurta on the second day in the morning. Once both the worship are done, first offer food to the Brahmins and then break your fast. This holy fast of Vaikuntha Chaturdashi is considered a symbol of mutual unity of the followers of Shivaism and Vaishnavism. The full moon of Kartik in the month is also another holy day as per the Hindu religion.

According to religious lore, the creator of the universe, Lord Brahma, Lord Vishnu, and Lord Shankar have described this day as one of the most virtuous. On this holy day, taking a bath in the river Ganga and donating a Diya (lamp) in the evening is considered to be very pious. Let us understand the benefits of the worship on Vaikuntha Chaturdashi.

According to the legends mentioned in the Puranas, giving donations and chanting the mantras on this day gives the same blessings as that of performing ten yagnas. If there is Krittika Nakshatra (constellation in the sky) on this day, then the day is called Mahakartiki. On the other hand, if there is Bharani Nakshatra, then Vaikuntha Chaturdashi becomes an extremely fruitful day. Also, if Vaikunth Chaturdashi comes during the Rohini Nakshatra, its results are even better. It is whispered that once Devrishi Narad Ji had asked Lord Vishnu the road to attain liberation (moksha) by doing simple devotion, Lord Vishnu, in response to which, said that the gates of heaven remain open for all those who observe fast on the day of Vaikuntha Chaturdashi.

There is a very popular story about Vaikuntha Chaturdashi. According to this legend, once Lord Shri Hari Vishnu came to Kashi (Varanasi or Banaras) to worship Devadhidev (God of Gods) Lord Shankar (Lord Shiva). After taking a holy dip in the river Ganga at the Manikarnika Ghat, he resolved to worship Lord Shiva with 1000 flowers of the golden lotus.

When Lord Vishnu started worshipping in the temple of Shri Vishwanathji (Kashi-Vishvanath temple – One of the 12 Jyotirlingas), Lord Shiva hid a lotus flower intending to test the dedication of Lord Vishnu. Lord Vishnu had resolved to offer a thousand lotus flowers, when he saw that one lotus was lee, he got concerned. Then Lord Vishnu remembered that he was also known as ‘Kamal Nayan’ and ‘Pundrikaksha’ meaning that his eyes were also like the lotus flower. On this thought, Lord Shri Hari Vishnu decided to offer his lotus-like eye to Lord Shiva.

Seeing this immense devotion, Lord Shiva was very pleased with Lord Vishnu. He immediately appeared and said to Shri Hari Vishnu, “O Vishnu! There is no other devotee of mine in this whole world like you. Thus, whoever worships you on this day will attain Vaikunth (Heaven). This day will be known as ‘Vaikuntha Chaturdashi’”.

Apart from this, Lord Shiva also gave Sudarshan Chakra, similar to the power and strength of millions of Suns, to Lord Sri Hari Vishnu. For this reason, it is believed that any person living on this earth observing a fast on this day secures his place in Vaikunth Dham (Heaven).

After travelling all around the earth’s orbit, when Devarshi Narada reached back to Vaikunth Dham, he had a question in his mind. Sensing from the expression on the face of Devarshi, Lord Vishnu said, “Rishivar, I see a question on your face, please tell what you want to ask”. Narad Ji immediately said to Lord that there was his innumerable devotee, many of whom chant his name and pray day and night, they would easily attain Vaikuntha. Though, many people were unable to chant Lord’s name all the time. Wasn’t there any way for them to attain Vaikuntha? In response to this, Lord Shri Hari Vishnu said that whoever observes a fast on the day of Vaikuntha Chaturdashi would attain Vaikunth Dham. It is believed that since then this fast of Vaikuntha Chaturdashi is being observed.

Vaikuntha Chaturdashi is the only day when Lord Vishnu is given special reverence at the Kashi Vishwanath Temple, a prominent temple of Lord Shiva in Varanasi. It is believed that the Vishwanath temple becomes as holy as Vaikuntha (Heaven) on this day. Both the deities are worshipped as if they are worshipping each other. Lord Vishnu offers Tulsi leaves to Shiva and Lord Shiva in return offers Bael leaves to Lord Vishnu.

All the obstacles in life get removed and the gates of heaven are opened for all those who observe this fast.