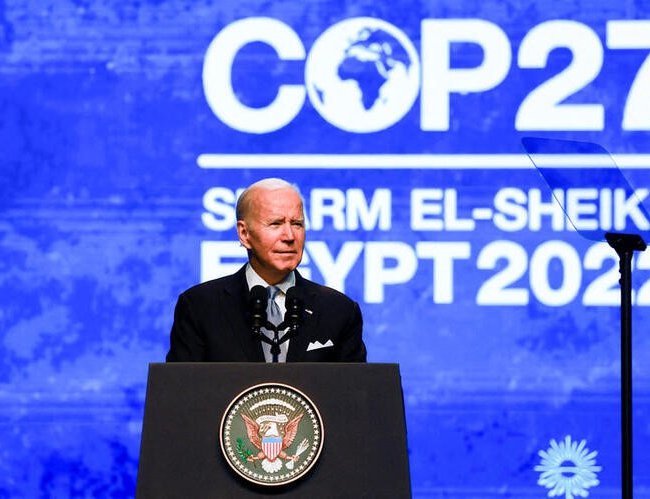 President Joe Biden says the United States is committed to tackling climate change at home and around the world, but stressed that "everyone has to act."

Biden delivered a speech on Friday at the COP27 climate change conference now underway in Egypt.

He referred to the global adaptation fund, which is designed to help developing nations better prepare for floods, drought and other climate disasters. Biden said his country is doubling its pledge to the fund this year to bring its total commitment to 100 million dollars.

Biden said the world needs to cut emissions of methane -- a potent greenhouse gas -- by at least 30 percent by 2030. He promised strong regulatory actions on the oil and gas industries to reduce US methane emissions by 87 percent compared to 2005 levels by 2030.

The president went on to say that he signed into law the "biggest and most important climate bill in the history" of the US in August. He said the actions that his administration is taking puts the US on track to achieve its goal of cutting greenhouse gas emissions by 50 to 52 percent below 2005 levels by 2030.

Biden also underscored the importance of the whole world accelerating its efforts. He said, "We see our mission to avert climate catastrophe and seize a new clean energy economy, not only as an imperative for our present and future, but through the eyes of history."