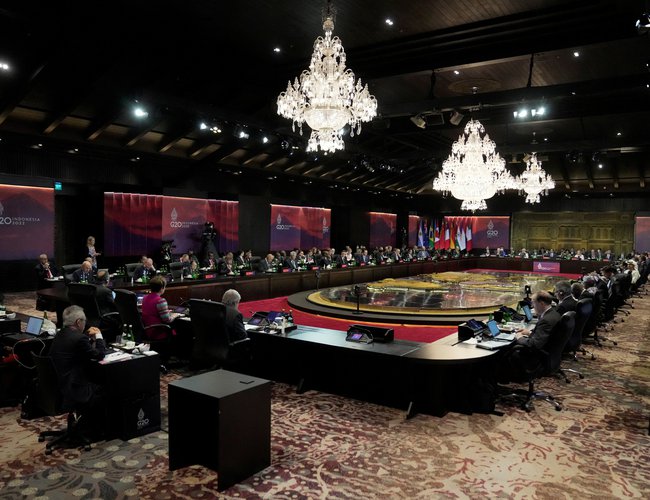 G20 leaders have kicked off a 2-day summit in Indonesia. But they skipped the annual group photo this year, struggling to show a united front amid widespread criticism of Russia for its invasion of Ukraine.

Leaders of the US, China and Japan are attending the Bali summit, but Russian President Vladimir Putin is not. His Foreign Minister Sergey Lavrov is there instead. Indonesia's president is this year's chair. He used his opening speech to call for peace.

Joko Widodo said, "Being responsible here also means that we must end the war. If the war does not end, it will be difficult for the world to move forward."

Ukraine dominated the first day. Sources say Lavrov again criticized Western sanctions, while the US and European countries lined up to condemn Russia for the invasion.

But China's foreign ministry says President Xi Jinping was critical of sanctions against Russia and opposed to politicizing food and energy issues.

Zelenskyy said, "Do not ask us to compromise our sovereignty, territories and independence. If Russia says it wants to end this war, Russia must prove it with actions. It's obvious that Russia's words are impossible to trust."

He said, "We outlined our principal approaches that underlie the ongoing crisis in energy and food security. And we showed the unseemly role of the West in the creation of this crisis."

Attention now moves to whether the leaders will find common ground on Ukraine before the summit wraps up on Wednesday.

Beijing Grapples With 'Zero-COVID' Unrest By Agencies 3 days, 6 hours ago