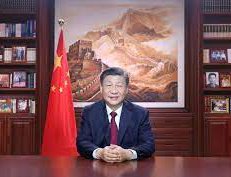 Chinese President Xi Jinping has called for unity as the country enters a new phase of its coronavirus response.

Xi delivered his New Year address through state-run TV and other Chinese media on Saturday.

He stressed the outcome of his government's anti-virus measures, saying it has "put the people first and put life first all along." He did not refer to the zero-COVID policy.

The virus has been explosively spreading across China since the strict policy was eased last month. Experts warn that infections are surging in Shanghai, Hubei Province and elsewhere around the country.

Xi said, "We have now entered a new phase of COVID response where tough challenges remain. Everyone is holding on with great fortitude, and the light of hope is right in front of us. Let's make an extra effort to pull through, as perseverance and solidarity mean victory."

Before the easing of the antivirus measures, Xi had repeatedly stressed that perseverance would mean victory.

Xi referred to Taiwan without using any harsh expressions. He has shown a strong desire to achieve what he calls the reunification of Taiwan.

He said, "The people on both sides of the Taiwan Strait are members of one and the same family."

The Chinese president added that he sincerely hopes that "our compatriots on both sides of the Strait will work together with a unity of purpose to jointly foster lasting prosperity of the Chinese nation."

Ukraine welcomes US Offer Of Long-Range Rockets By Agencies 10 hours, 51 minutes ago

US Shoots Down China's Balloon, Says Defense Department By Agencies 11 hours, 6 minutes ago