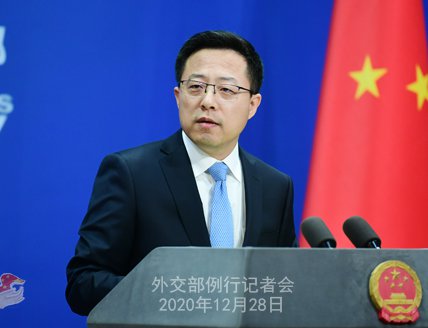 A Chinese Foreign Ministry spokesperson has defended the country's suspension of visa issuance for Japanese travelers, saying it is a reciprocal response to "discriminatory" measures.

The Chinese Embassy in Tokyo announced the suspension on Tuesday after Japan tightened entry rules for arrivals from China.

Wang Wenbin told reporters on Wednesday that Beijing's decision is a just and reasonable response needed to ensure the legitimate rights of Chinese citizens and normal exchanges and cooperation between the nations.

Wang was asked if China's measure lacks reciprocity, as Japan has not restricted issuing visas for Chinese travelers to the country. But he did not respond.

Asked if Beijing will not take a reciprocal step against the United States, which has border control measures in place, he only said he had already answered.

An expert on Chinese affairs says Beijing has imposed visa restrictions as a retaliatory measure against tighter border controls.

Korogi Ichiro, a professor at Kanda University of International Studies, pointed out that Beijing has ended its "zero-COVID" policy and is telling people that they are free to travel abroad. Korogi suggested border restrictions by other countries run counter to the move.

He also said China has picked South Korea and Japan for retaliatory action this time. He indicated that Beijing will likely wait and see how other nations react.

Zelenskyy Meets With EU Leaders By Agencies 1 hour, 28 minutes ago

Russians Advance On Bakhmut As Allies Mull Jets For Ukraine By Agencies 3 days, 2 hours ago

Ukrainian Soldiers Arrive In Britain For Tank Training By Agencies 5 days, 2 hours ago