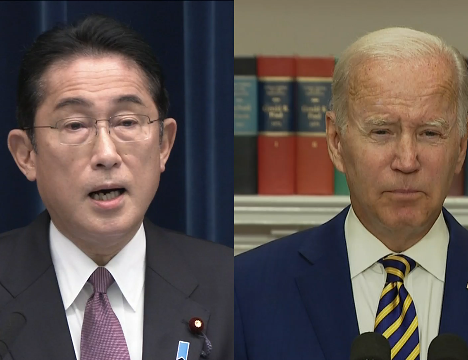 Kishida visits the United States on the last leg of his tour of five Group of Seven nations. Japan holds the presidency of the G7 this year and will host its summit in Hiroshima in May.

During their bilateral meeting, Kishida and Biden are expected to reaffirm the unity of the G7 as the world faces such challenges as Russia's invasion of Ukraine and food and energy crises.

Kishida, with China's increasingly assertive moves in mind, wants to show Japan and the US are on the same page in their security strategies and are ready to bolster the deterrence and response capabilities of their bilateral security alliance.

The two leaders are also expected to confirm tighter bilateral cooperation in economic security, including the development of cutting-edge technologies like semiconductors, quantum computing and biotechnology.

Ukrainian Soldiers Arrive In Britain For Tank Training By Agencies 17 hours, 5 minutes ago