Pushpa Kamal Dahal, commonly known as Prachanda, has secured the support of a diverse group of political parties, including a liberal democrat party, a communist party, and a right-wing party. However, this is not unusual in Nepali politics and that "rainbow alliances" have been a characteristic of the political process in Nepal for the past 70 years. In the last seventy years of modernization of the political process, such surprising rainbow alliances remain the main character of Nepali politics. PM Prachanda secures vote of confidence with a historic majority 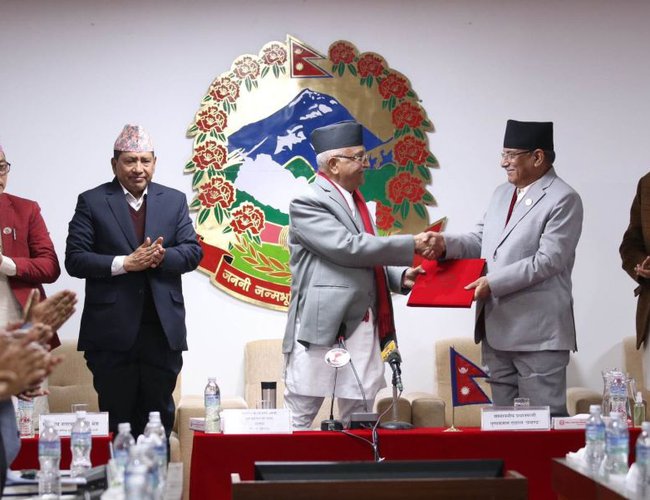 The decision of the Nepali Congress to vote in favor of a vote of confidence motion at the House of Representatives on January 10 supporting Prime Minister Pushpa Kamal Dahal Prachanda was surprising for many. He Prachanda, a radical Maoist leader, is the first prime minister in the last 8 years to receive the vote from rightists, regional Madheshis, leftists and centrists. Only two members representing radical communist parties voted against him. 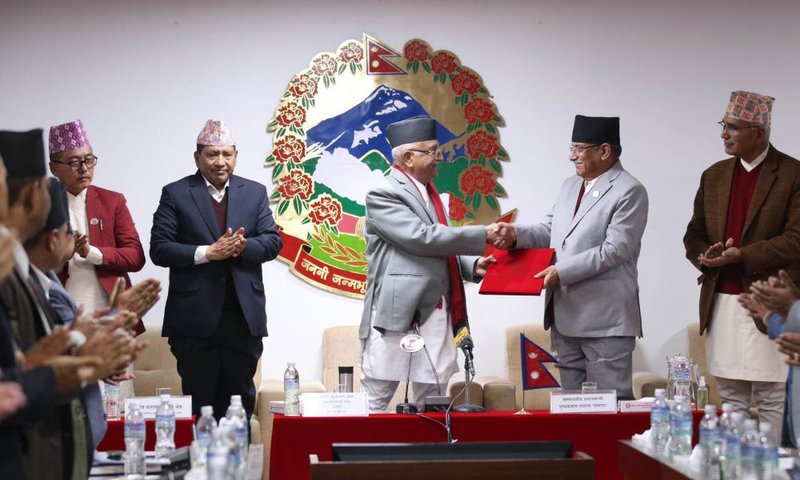 Different parties are able to put aside their differences and work together for the sake of power. However, it can also be challenging to maintain such a coalition, as the different parties may have competing priorities and agendas.

Prime Minister secures vote of confidence with a historic majority, which implies that the PM has strong support from the parliament, further strengthening his position in the government. Nepal's political scenario is complex, and it's a multi-ethnic and multi-lingual country and to maintain a balance among them, a coalition government is needed.

With this backing Prime Minister Pushpa Kamal Dahal 'Prachanda' has secured a historic vote of confidence. A total of 268 out of 270 members of the House of Representatives (HoR) present in the meeting voted for the proposal on the vote of confidence to the government presented today at the HoR meeting by PM Prachanda.

Out of 275 members of the HoR, 270 members were present in the HoR meeting on January 10. CPN (Maoist Center) Chairman Prachanda was appointed the Prime Minister of Nepal on December 25, 2022. 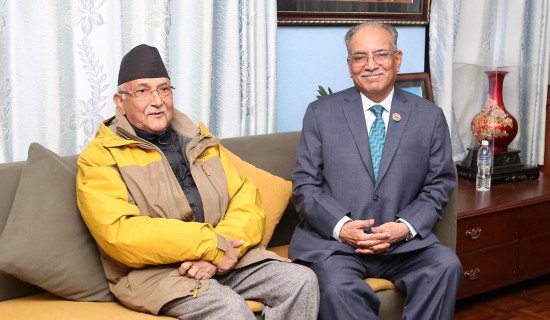 Pashupati Shumsher JB Rana, the senior-most member of the HoR who presided over the HoR meeting, declared that PM Prachanda has got 268 votes in favor of his proposal while two votes were against the proposal, and thus PM Prachanda got the vote of confidence. He said 270 members of the HoR were present in the meeting.

As Prime Minister Prachanda receiving the highest vote was unusual, the political alliance announced by Maoist leader Prachanda and UML leader KP Sharma Oli, who were in a fight to eliminate each other's political existence eating oranges in Prachanda house, was also shocking.

Another surprising event is the rise of TV anchor Rabi Lamichhane and his independent party in power. Lamichane went to Oli house and became deputy prime minister and home minister and Monarchist RPP supported the republican Prachanda was another accidental incident in Nepali politics in recent times.

Indian Prime Minister Narendra Modi was the first person to congratulate Prachanda who arrived to take the oath of prime minister by posting wishes on his social media on the birth anniversary of Chinese leader Mao. 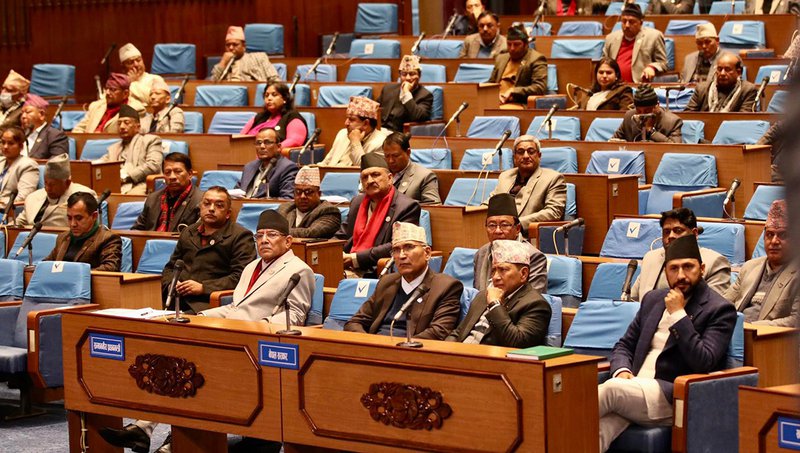 Indian Prime Minister Modi, a devout Hindu, was the first leader to congratulate the anti-religionist Maoist leader Prachanda, but it was a regular occurrence. India has always seen the pro-Hindu monarchy of Nepal as being close to communist and Republican China.

From Monarchy to Democracy and present-day democracy, the system, characters and trends have changed but sudden and unexpected events are happening regularly in different periods with no political ideology taking shape.

However, those were a regular occurrence in Nepali politics. Giving a shocking surprise to political analysts, common people and Nepal's western and other friends, Maoist Center Leader Pushpa Kamal Dahal, a staunch republican and hardcore follower of radical Chinese communist leader Mao claims the formation of a government with an alliance with Rajendra Lingden, leader of Rashtriya Prajatantra Party (RPP), a staunch monarchist, anti-secularist and anti-federalist.

Along with RPP, Nepal Swatantra Party was led by former Television Program producer Lamichhane, who emerged in a mysterious and surprising circumstance vocally criticizing CPN-UML leader KP. Sharma Oli, Maoist Leader Prachanda and Nepali Congress leader Sher Bahadur Deuba with #no not again# in Twitter, backed the Maoist leader in reconciling with Oli. Lamichhane, who was sent to custody during the tenure of PM Oli and whose case on Citizenship and passport issues is in court, became deputy prime minister and Minister of Home Affairs.

As the formation of the government under Maoist leader Prachanda was surprising, the decision of the Nepali Congress decided to support the vote of confidence motion for a Prachanda-led government is another surprising event in politics.

Mobilizing the support of all major political parties, Prime Minister Prachanda has shown that Nepali politics does not have strong ideological differences.

Although the current political alliances and matchmaking are surprising and unbelievable for the diplomats and leaders of western countries, what happened on the floor of the House of Representatives on Tuesday ((January 10) and the meeting between Maoist leader Prachanda and UML leader K.P. Sharma Oli, die-heart rivals splitting the party 17 months ago, on December (17) were accidental but regular phenomenon which has been occurring in Nepal over the last seven decades. 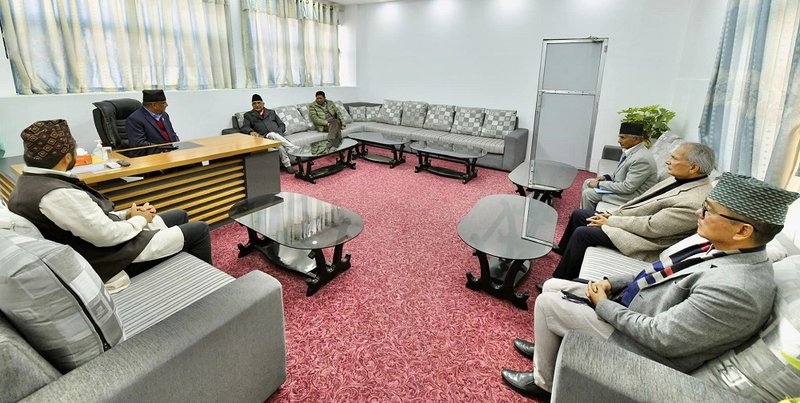 Even the ongoing politics shocked Balen Shah, the mayor of Kathmandu Metropolitan City who has surprisingly emerged in the politics of Kathmandu defeating two main contenders of major political parties.

On social media, he wrote "I will return the king", "I don't want the king", and "I will kill the king". All three are in government. We the people are always suffering.

As seen by Mayor Balen, this was not the first and will not be the last incident where political Bam-Bam, Kang Bam and Rajabadi have come together and separated.

Another surprise was the merger of the Maoist Center and UML as one party within a year. But the government led by KP Oli, who had a two-thirds majority in the HoR, collapsed like a house of cards.

Nepali Congress leader Deuba became prime minister in an HoR which was reinstated under the order of the court. With the support and backing from Prachanda and Madhav Kumar Nepal, NC leader Deuba run a coalition government for 18 months and contested the local and federal elections-making alliance.

In the same way, no one could have imagined that the party of Television news producer and anchor Lamichhane would get such success in the recently concluded election he would become the Home and Deputy Prime Minister.

No one thought that Lamichhane of the independent party, which raised slogans against Oli, Deuba and Prachanda, with #no not again # campaign, would so soon accept the shelter of the same leaders.

In the political horizon of Nepal, such seemingly accidental events have been happening regularly since the first mass movement of 1990/91 was being prepared.

Even the idea that the Seven Communist Party Alliance, which included radical, moderate and anti-revisionism, and the Nepali Congress, which considers itself liberal democratic, will form a united front and unite in the anti-Panchayat movement.

As the anti-Rana moment of 2007 (1951) ended with a power-sharing agreement between the revolutionary Nepali Congress and oppressor Rana forming the national government accidentally, all the political events and changes since then concluded with agreement among the hostile ideology.

In 1990 when people all over the world were overthrowing the communist regime including the collapse of the Soviet Union and many communist regimes of eastern Europe, Nepali Communists, extremely radical, moderate, and liberal, formed seven party alliance and joined the front with Nepali Congress to overthrow Panchayat.

Communists were not only able to overthrow Panchayat; they also rose as a strong political force in Nepal against the global trends of anti-communism. 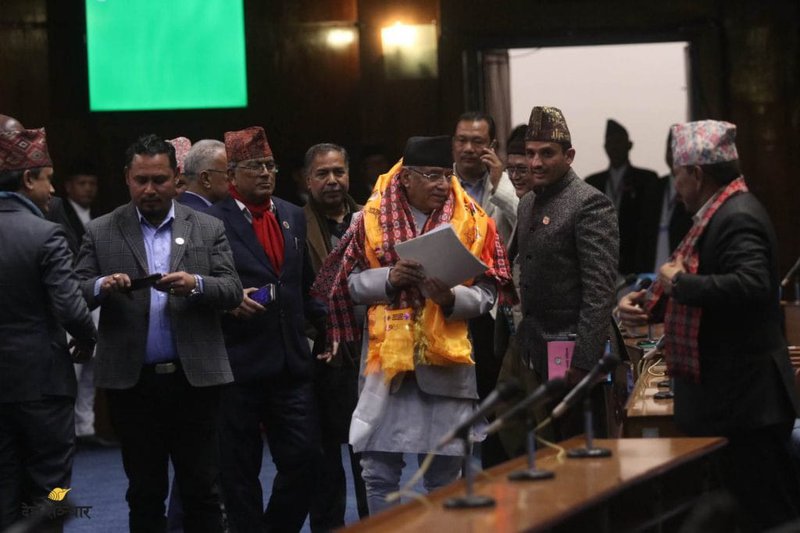 Nepali Congress and Communist Parties overthrow Panchayat and they did not allow Panchas to contest the elections in 1991 leaving only 4 seats for former Panchas. Four years later in the mid-term elections of 1995, Rashtriya Prajatantra Party (RPP) emerged as a key party with 20 members in the hung House of Representatives of 205.

Backed by CPN-UML and Nepali Congress, the late Surya Bahadur Thapa and Lokendra Bahadur Chanda rung the minority government side by side.

No one expected that Nepali Congress leader Girija Prasad Koirala and radical Maoist leader Prachanda, who killed and displaced thousands of NC workers, would ally against the monarchy. However, by signing the 12-point agreement, NC not only launched a joint struggle with Maoist against the monarchy but also backed the Maoist agenda for republic, federalism and secularism.

Situated between two geographically and economically emerging giant countries in world politics, Nepal remains constantly unstable due to such sudden events brought about by geopolitical maneuvers.

As Nepal, a traditional, underdeveloped country, has limited economical and political capacity, such regular but accidental events will occur repeatedly and there is no solution shortly.

With immature political and power-monger leadership in power, there is likely that the unstable situation will be prolonged for a long time to come. For the sake of power, political leaders continue to sacrifice the ideology of left and right. 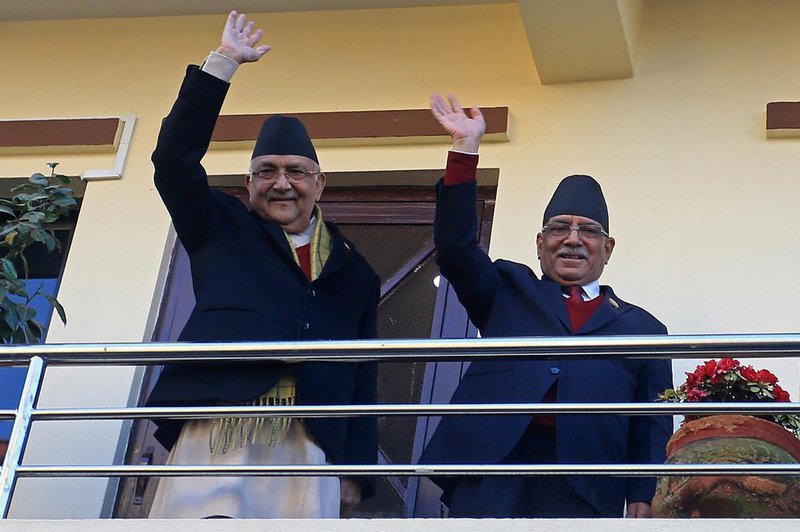 After Rabi and Oli, there will be Kabi or Sabi in political power which will continue to put Nepal into a course of prolonged political instability.

In Nepal, which is connected with India by civilization, culture, religion and geography, Communists have an overwhelming majority and depth influence. Although India has been ruled by the Bam party Bharatiya Janata Party wiping out communists, Nepal's communists are rising and ruling the country from time to time. Given the ideological closeness with India, the influence of Nepal's liberal and rightist democrats is shrinking.