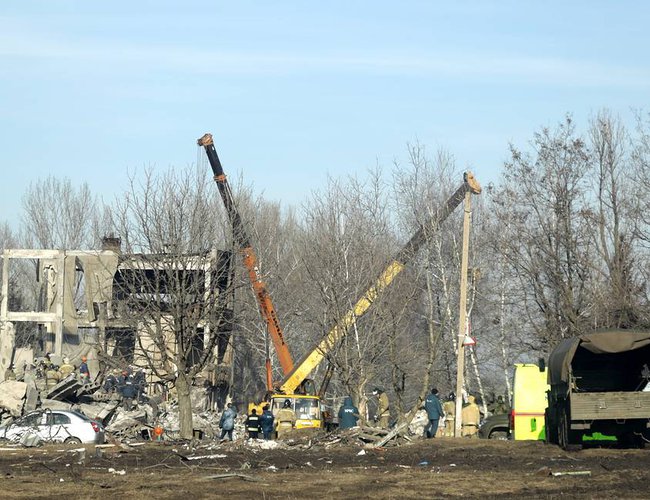 Ukraine's president says 30 people, including a 15-year-old girl, were killed in Saturday's Russian missile strike on an apartment building in the eastern region of Dnipropetrovsk.

Volodymyr Zelenskyy said on Sunday that the attack on the nine-story tower in the city of Dnipro also left 73 people wounded and over 30 others missing.

The attack was part of the latest Russian missile barrage on the capital Kyiv and other parts of Ukraine.

The Russian defense ministry says the attacks were launched against Ukraine's military command and control system and energy facilities. It insists that all designated targets were hit.

He discussed the defense ministry's recent announcement that Russian troops had seized Soledar, a town near the Ukrainian stronghold of Bakhmut in the eastern region of Donetsk.

Putin said the dynamics are positive and that everything is developing within the plan of the defense ministry and the General Staff.

He added that he hopes Russian fighters will please their compatriots more than once again with the results of their combat work.

The General Staff of Ukraine's Armed Forces says Russia has been building up its aviation grouping in Belarus under the guise of holding the joint exercises. It warns that the threat of missile and air attacks from Belarus is increasing.

Zelenskyy Meets With EU Leaders By Agencies 45 minutes ago