It seems Bhattarai's strict adherence to the 'Westminster' Model of democracy as he understands it , has come in the way of this arrangement being practiced. He says only the Prime Minister who has ordered the election at the time of dissolution of 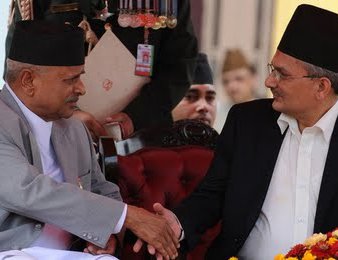 What will be Nepal's politics like without the current political actors in place? What will be their respective parties be like? Naturally, they will think that their absence or exit from the scene will bring about the end of politics, and naturally the political parties. Baburam Bhattarai has said many times that he cannot leave the post by leaving behind the country in crisis. But his statement means nothing except an expression of arrogance and megalomania in him.

President Ram Baran Yadav, in one of his public outbursts, said recently that political parties in Nepal have failed. Taranath Ranabhat, former Speaker of the House of Representatives, told Bhushan Dahal in the fireside that the President was wrong in that conclusion. If there is a failure involved, it is the failure of the individuals or the leadership but not that of the party, he argued.

But what is a party? After all, it is a legally organized and structured body that follows a certain set of principles and believes a country can be run on the basis of those principles and policies if people endorse them.  That is why a periodic election becomes so crucially important in running the state. People choose the party and leaders of their choice based on their programmes, policies , preference and conduct. It happens only in a totalitarian or an authoritarian regime that a legislature elected for two years extends its tenure at will without facing the electorate. Only a totalitarian thinks his quitting the care-taker Prime Minister's position will push the country towards a deeper crisis. Other parties like the Nepali Congress, Communist Party of Nepal-Unified Marxist Leninist and the Madhesi groups apparently do not seem to differ with the argument that Baburam Bhattarai has advanced. They simply want an amendment to that: that we were part of the 'politics of consensus' that we promised to carry forward in 2006, and that it will still remain valid if we all are included in the government. Of course, the leadership should have a fixed tenure on rotational basis.

It seems  Bhattarai 's strict adherence to the 'Westminster ' Model of democracy as he understands it , has come in the way of this arrangement being practiced. He says only the Prime Minister who has ordered the election at the time of dissolution of the legislature can/must hold the election to the legislature, and that he cannot be replaced in between. A Prime Minister cannot die, cannot quit and cannot abdicate under any circumstances without conducting the election.  And strangely, Bhattarai sticks to this provision of the Westminster Model (as he understands) only.  Owning responsibility for failure to conduct elections on the promised date or treating all equal before law, respecting independence and supremacy of judiciary all are optional. He knows if he or his wife or both are tried by the Commission of Inquiry Into the Abuse of Authority, or if tomorrow, he is hauled by the Supreme Court on contempt of court cases, or if he is arrested by the state organs for obstructing the course of investigation into the murder case of journalist Dekendra Thapa, the country will plunge into a much deeper crisis. After all, who will know this better than our lal messiah?  What is the norm, rule and constitution by the way? Like power comes from the barrel of guns, constitution or the rules or the norms to run the state flow from Dr. Bhattarai's mouth.  That is why he or his party do not feel obliged to follow the accords or the rules or the provisions of constitution.

The Comprehensive Peace Accord had a mandatory provision of the Truth and Reconciliation Commission being formed within forty five days of its being signed on November 21, 2006. But the Maoists or their partners, including the NC, UML or the Madhes groups, did not make it an issue because they were part of the government, sharing all powers, privilege and plum posts for themselves and their supporters.  This became an issue only when they started falling out, especially after Maoists were able to unconstitutionally remove the monarchy with the support of these parties.  When they were in power, none of these parties were keen to have the TRC formed. They were not bothered to pursue investigation into any HR abuse case in which the Maoists were involved.  There is not one instance in the legislature or outside it in which the NC or the UML could say “we will not join the government until and unless Madi massacre or Muktinath Adhikary or Dekendra thapa case are probed".  Bhattarai’s or Maoists’ strength lies in the dual standards of these democratic parties.

So, the debate revolves round one point: have these parties failed or their leaders alone? What was the mandate that these parties had given to their respective leaders? Did the party ever caution these leaders to act as per the directive issued by the party? It was a sheer dereliction of duty or responsibility on the part of all the parties except the Maoist Party which moved decisively forward towards capturing the state.  Undoubtedly, this is failure of the party (ies).

Plurality is the core value of democracy and therefore, it cannot be done with. But a party or parties refusing to review their policy and performance and yet insisting they were never wrong have to be declared a failure. Their being discarded as failure will not weaken democracy.  If they cannot rejuvenate, new and vibrant parties will be born in place of the deadwoods and defeat the totalitarian's quest to capture power.  Their demise will not spell a doom for the country.

Country Roads, Take Me Home By Hemang Dixit 2 days ago

Border Dispute Between Nepal And India By Dr. Prabin Manandhar 3 days, 2 hours ago

Towards 'Carbon Neutrality'! By Batu Uprety 3 days, 21 hours ago