Prachanda Sworn In As PM: New Tie-ups In Nepal, Concern In India

For India, Sher Bahadur Deuba in power was the best case scenario, with Prachanda's ally in the current government, KP Oli, being viewed as pro-China. Here's what is happening in Nepal, and what it can mean for India. 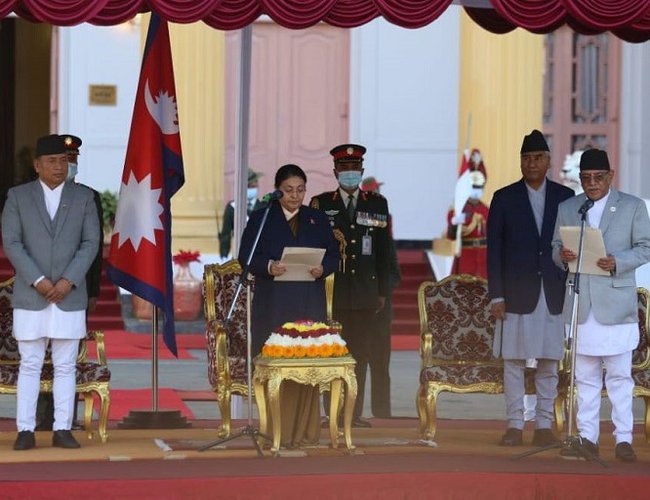 Pushpa Kamal Dahal “Prachanda” was sworn in as Nepal’s new Prime Minister on Monday, after he switched sides to join hands with a bitter foe, the former prime minister Kharga Prasad Oli.

This is Prachanda’s third stint as the head of government in the 14 years since Nepal’s monarchy was abolished. Before joining mainstream politics in 2006, he had led the Maoist revolt in Nepal for over a decade.

Until Sunday, Prachanda was in a pre-election alliance with former Prime Minister Sher Bahadur Deuba. This five-party alliance, led by Deuba’s Nepali Congress, was the frontrunner after the November 20 elections, winning the largest number of seats in a fractured mandate. However, Prachanda walked out of the alliance at the last moment, after Deuba turned down his demand for the PM chair.

Within hours on December 25, Prachanda and Oli, who have been bitter adversaries, buried the hatchet, and drove together from Oli’s residence – through crowds of cheering supporters – to meet the President with a letter of support from 170 members of Parliament, well ahead of the 138-half way mark.

The other parties in the coalition are the brand new youth-centric Rastriya Swatantra Party, which has no clear political ideology but won an impressive 20 seats; Nagarik Unmukti Party, an outfit led by murder convict Resham Chaudhary; Janamat Party led by C K Raut with its base in Eastern Tarai; and the Janata Samajbadi party.

But the biggest surprise is the support of the pro-monarchy Rastriya Prajatantra Party, which has 14 members. The party has been critical of the US, European Union and India for their ‘active’ involvement in Nepal ‘s transition to a federal and secular republic, from a unitary Hindu monarchy.

The Nepal Congress-led coalition might have succeeded had Deuba agreed to a grand bargain with Prachanda. This would have meant letting go of the Prime Ministership. Observers spoke of a deal by which Deuba’s politically inclined wife might have been given a post in government if he took a back seat.

But Deuba’s claim to remain the Prime Minister was based not just on the Nepali Congress emerging as the single largest party with 89 seats. In backroom negotiations, he is also said to have boasted that he enjoys the “support of both Washington and Delhi”.

Indeed, after the results were out, the US and Indian ambassadors met Deuba and Prachanda frequently, in the hope that their alliance would remain intact.

There was criticism of the two ambassadors meeting the leaders, with rivals and critics warning that any act to influence government formation could be seen as ‘subversion of the mandate’, and that their actions might draw China in as well.

There has been no Chinese ambassador after the departure earlier this year of Hou Yanqi, Beijing’s most high-profile envoy yet in Kathmandu. Hou was instrumental in stitching up the Communist alliance of 2018 between Oli and Prachanda — which fell through in 2021, as it had four years earlier. The new Chinese ambassador, Chen Song, will arrive in Kathmandu after the new government is installed.

Maoist Centre General secretary Barshaman Pun, who has always favoured an alliance between the two Communist parties, returned recently after spending two weeks in China, reportedly for medical treatment, and played a key role in bringing Oli and Prachanda together.

President Bidhya Devi Bhandari, who is close to Oli, supports the coming together of Leftist forces, and was hardly comfortable with the Deuba-Prachanda alliance, is said to have remained in close contact with Chinese diplomats and other senior officials in Beijing all throughout.

For India, Deuba in office was the best-case scenario. Delhi views Oli as pro-China, and the coming together of Communist forces to form the government is a turning back of the clock from its point of view. After the bitterness in ties during Oli’s terms in office from 2015-2016 and 2018-2021, India-Nepal relations had improved after Deuba became PM in 2021.

Still, in an indication of how important this relationship is to India, Prime Minister Narendra Modi was the first foreign leader to congratulate Prachanda. The Maoist leader has been a beneficiary of India’s support since 2005, and in 2016, when he dislodged Oli, there was palpable relief in Delhi.

At present, however, Oli’s influence over Prachanda’s government will be a factor in bilateral ties. Moreover, Modi also avoided meeting Prachanda despite his request when he visited Delhi earlier this year. Just two months earlier, Deuba had received a red carpet-welcome.

Among the immediate concerns for Delhi would be the fate of the West Seti hydropower project, which the Deuba government awarded to India. Oli’s UML had opposed the decision.

Since its transition to a parliamentary democracy in the 1990s and a republic in 2008, Nepal has seen 33 governments in 32 years.

For the new Prachanda-Oli coalition, the formation of the cabinet with a ceiling of 25 will be the first challenge, with all coalition partners and Independents clamouring for positions and portfolios.

With elections for President and Vice President due by mid-March , and for Speaker and Deputy Speaker of Parliament soon, the parties would have to show more accommodation, especially in context of the partisan roles these offices have played over the past few years.

The new government may also face a dilemma over the Deuba government’s endorsement of the Millennium Challenge Corporation fund, a $500-million infra pledge from the US, which the Communist parties suspect has a hidden security agenda.

All Party Meeting Decides To Continue Consensus And Cooperation By Agencies 2 weeks, 2 days ago