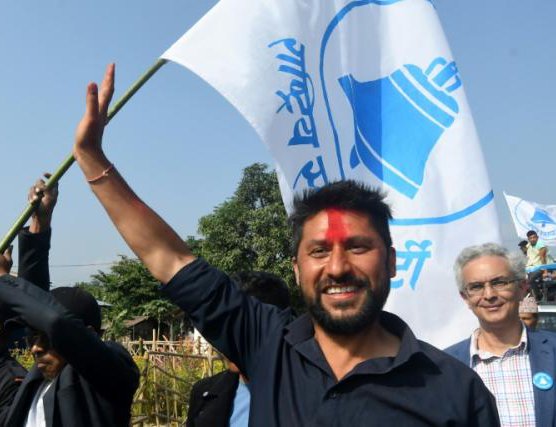 Rabi Lamichhane is contesting election to the Parliament from the Rashtriya Swatantra Party (RSP) ticket and has already emerged as a national phenomenon that the people of Nepal believe may shape the country's politics and power, at least for now.

Rabi Lamichhane , a television anchor, who highlighted public issues and pushed the government to sit up and take notice, is now preparing for a larger national role.

Lamichhane is contesting election to the Parliament from the Rashtriya Swatantra Party (RSP) ticket and has already emerged as a national phenomenon that the people of Nepal believe may shape the country’s politics and power, at least for now. Not just him, other candidates from his party, all below 40, are establishing their presence, and in some places emerging as possible winners, as the counting progresses.

For the existing major parties, all led by the older generation in their 70s, the pressure seems to be growing two-folds — to pave way for the youth and to take responsibility for the likely decline in their credibility and outcome in the polls.

Gagan Thapa, General Secretary of the Nepali Congress, who won Kathmandu-4 seat on Tuesday, said he would challenge Prime Minister Sher Bahadur Deuba for the Congress Parliamentary Party leadership .While the RSP did not field any candidate against Thapa, it supported Sagar Dhakal , an Oxford scholar who fought as an Independent candidate against Deuba in his constituency in far west Nepal. “My victory today, and the trust people have bestowed on me, gives me enough legitimacy to aspire for the top post,” Thapa said.

Another General Secretary Bishwa Mohan Sharma, who is also ahead in the race said he will stand by Thapa — indicating the lack of trust on Deuba and possible fissures in the party.

Early trends also indicate that most stalwarts of the Communist Party of Nepal-Unified Marxist Leninist who are close to its chief K P Oli are trailing , making his continuation as party leader difficult. Ishwar Pokharel, Bishnu Poudel, Subhash Nembang ,Agni Kharel — all key advisers and ministers when Oli was heading the government — are trailing. “Oli has to take responsibility for all these reverses,” one of the leaders said.

The Maoist Centre, a major partner in the Nepali Congress-led coalition, is another party that appears poised for a decline. Its chief Pushpa Kamal Dahal and other senior leaders are in the lead, but former speaker Onsari Gharti, former minister Pampha Bhusal and Manusi Yami, daughter of former PM Baburam Bhattarai, appear to lose.

The latest trend shows, while the NC is leading in about 42 of the165 constituencies, UML is ahead in 35.The Madhes Centric Samajbadi Janata Dal, the Lokshakti Party and United Communist , a splinter group of the UML, indicate a decline. The RSP and the pro-Monarchy Rashtriya Prajatantra Party (RPP), however, have established leads in 10 and seven seats, respectively. The remaining 110 seats allocated under the proportion representation system will be divided among parties based on how many votes each of them polls.

The RSP does not have a formal structure of the party yet, and its chief Lamichhane has a case pending before the Election Commission about his “nationality”— he had abandoned the US citizenship but allegedly did not carefully follow the process to reactivate his Nepali citizenship. In case of his disqualification on citizenship issue, RSP will be facing an unprecedented crisis and vacuum. The party has fielded candidates in 131 of the 165 candidates for the Parliamentary seats.

In a politically significant move, the RSP did not field any candidates for the provincial legislature, an indication that it is opposed to the federal structure or that it wants just the federal and local bodies as a two-tier devolution of power.

With all speculation and early trend in favour of a hung Parliament, and with the big three and Madhes-based parties demoralised, the two emerging forces—RSP and the RPP—may stand to gain the bargain for power.