Why China Is Happy With Nepal’s New PM

The Pushpa Kamal Dahal Prachanda-K P Oli alliance may not be stable. But it does seem to be more amenable to Beijing. 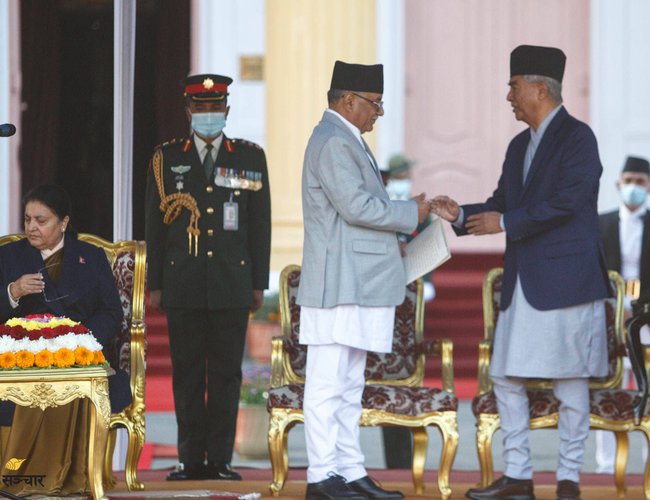 It was certainly a coincidence that Pushpa Kamal Dahal “Prachanda” took his oath of office as the new Prime Minister of Nepal on December 26. It was the 130th birth anniversary of Mao Zedong, the man whose ideology inspired Prachanda to lead a decade-long insurgency in the country. However, there are many other messages — definitely deliberate — that convey a sense of euphoria, happiness and victory in China over Nepal, perhaps the first time since Xi Jinping began a historic third term.

Prachanda, as the leader of the third-largest party in parliament, was not considered a serious contender for the post. But some last-minute manoeuvring – that saw his defection from the Nepali Congress-led alliance to one led and dominated by his bitter rival, K P Oli — catapulted him to the post with a message that miracles can happen in politics too.

Though Indian Prime Minister Narendra Modi was the first to congratulate Prachanda, China sent multiple messages that attest to engagement with and interest in recent developments in Nepal.

The political movements in Nepal following the election results on November 20 saw the Nepali Congress becoming the single-largest party with 89 members. Along with its ally, the Maoists, and three other parties, this group was half a dozen seats short of the required 138 seats to form the government. There was no sign of Prachanda defecting to Oli’s side. The latter, though, seems to have worked quietly to bring together the UML, Maoists, Janata Samajbadi Party, Rashtriya Swatantra Party and the pro-monarchy Rastriya Prajatantra Party, taking its total to166 members.

China’s acting ambassador met Prachanda to congratulate him the same day as his elevation and conveyed that Beijing had lifted the suspension of business and supply of goods from the Rasuwa-Kerung and Hilsa-Parang 2 checkpoints that had not been commissioned for use since the Covid-19 pandemic hit.

There is already much speculation about Oli’s intentions. Is his aim truly to build left unity? Or will he be guided by the ulterior motive of reining in Prachanda and swooping into the leadership position himself? These questions will be answered on January 10 when Prachanda faces a mandatory vote of confidence in parliament.

Oli has been quietly trying to negotiate to have three parties — UML, its splinter group the United Socialists, and Janata Samajbadi Party — merge so that it becomes the largest party in parliament with 100 seats, surpassing NC. Prachanda’s failure to secure a vote of confidence would work in favour of the single-largest party which, under such circumstances, would gain the first opportunity to form the government as per article 76(3) of the constitution.

China had good reason to worry about the prospects of NC’s Sher Bahadur Deuba becoming the PM yet again and knew Prachanda’s defection was the only way to stall that. Oli couldn’t be happier since Prachanda ended up doing just that.

The Deuba government had started dampening the prospects of the execution of China’s Belt and Road Initiative by stating that Nepal would prefer projects under grants over loans. In addition, the Nepal parliament ratified the $-500 million Millenium Challenge Corporation (MCC) compact in February. This was effectively overruling Chinese objections and awarding two mega hydroelectricity power projects — West Seti and Seti Water — with a combined production capacity and worth of 1200 MW and $ 2.4 billion to the US.

In its first official reactions after the polls, the Chinese foreign ministry said on Tuesday that it was looking forward to working together with Nepal on BRI projects. The break up of the Deuba-Prachanda alliance and the fact that Oli — the man who put up a brave front to India during the blockade in the later half of 2015 — signed trade and transit agreements with China in retaliation when confronted on the border issue seems to once again be at the centre of Beijing’s plan to make deeper inroads into Nepal.

Other Chinese gestures point towards this well. A day before the Indian ambassador called on Prachanda on Thursday, and even before the government was confirmed by parliament majority, a high-level Chinese team was already in Kathmandu to conduct a feasibility study for the ambitious Kerung-Kathmandu railway line, a major project under the BRI. As concerned as India, if not more, about a more China-friendly political atmosphere in Nepal, US ambassador Dean Thompson also met Prachanda on Friday promising to deepen the 75-year-old bilateral relationship.

The fact that Deuba’s installation — favoured by India and the US – was scuppered is no less significant. That, however, does not guarantee political stability or the continuity of the Oli-Prachanda alliance for long.

The writer is a senior journalist