Usual or unusual, the rise of radical communist ideology all over Nepal is a visible reality. Although the Nepalese launched several political struggles for instituting a liberal political system since the 1950s, they have given birth to a radical be 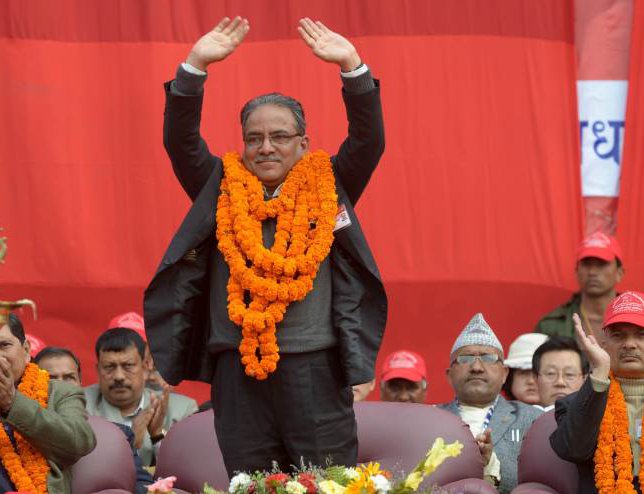 Never before in any political moment of Nepal was the closest border city of Hetauda covered by red flags, with sickles and hammer, so much and slogan of revolution chanted by the followers of radical communists so loud. One of the feathers in the red cap, however, was the declaration by the radical communist leaders to transform their party to a liberal party, giving up the Maoist and Leninist brand of orthodox communism.

The red face of Hetauda, a tiny city 60 miles south of the capital and just twenty miles north of the Indian border across which lied the Maoist infested India's two states Jharkhand and Bihar, looked very unusual.

Although UCPN-Maoist leaders declared that the time had come for them to chart a new course by transforming their party from orthodox radical communist to a moderate party, the cadres continued to enjoy chanting the slogan of revolution under the banner of Mao, Lenin and Stalin.

"I don't think any communist brand of politics will emerge here. At a time when even communist China has discarded Maoism, it is impossible for Nepal's ruling Maoist party to carry on with it. Their expression and commitment to liberal democracy is a testimony to the change," said professor Dr. Lok Raj Baral. "Everyone needs to accept the reality of Nepal, where people are actively involved in the agitation, hoping to establish a liberal system, not for any authoritarianism."

During the convention, UCPN-Maoist leaders Prachanda and prime minister Baburam Bhattrai proposed transformation of the party, but an overwhelming number of party cadres, who were trained and raised in the orthodox ways of communism, resisted them.  UCPN-Maoist leader Ram Karki registered a motion against Prachanda and Bhattarai's proposal. Even the current deputy prime minister and foreign minister Narayan Kaji Shrestha tabled a proposal demanding inclusion of the words accusing India as a hegemonic power interfering in Nepal’s internal politics.

UCPN-Maoist leader Shrestha and Karki, who come from different schooling, seem to be aware about the voices of majority of party workers. Their efforts are to cash in on the voices of dissension.

Despite Maoist claims for liberalism, they have not found any time to pay tribute to the philosophy propounded by Mahatma Gandhi  or liberal democrat Jawaharlal Nehru, Radha Krishnan or Jaya Prakash Narayan. Hetauda echoed with the philosophies and words of Lenin, Stalin and Mao. For a majority of UCPN-Maoist leaders and cadres, the Mantra of Mao, Stalin and Lenin is real and other democratic ideals are just fake. They don’t spare time to speak about Jyoti Basu and Nambudaripad of India.

Along with tens of thousands of Maoist cadres and sympathizers, leaders of Democratic Party of Nepal and India listened to the story of revolution and praise for Maoist party from representatives coming from various communist countries, including Cuba and North Korea.

At a time when UCPN-Maoist, a major communist outfit having a record of waging a people’s war, is running the country in alliance with moderate regional parties of the southern plain and holding its convention, Nepali Congress, the main opposition democratic party,  is in alliance with CPN-UML and United People’s Front, a radical communist outfit to pull down the government.

"Nobody can accept communism now. Not even our international friends. UCPN-Maoist may have some communist hangover. However, CPN-UML has transformed itself claiming itself as a liberal democratic party like Nepali Congress," said professor Baral. "The communist brand is outmoded now."

Compared to UCPN-Maoist, CPN-UML, which also initially started its base by taking part in violent Naxal moment, has contested several democratic elections to transform itself as a democratic party. However, it is yet to denounce any communist figures and pronounce the democratic ideals. "A few years ago, it was reported in the media that CPN-UML leaders removed the picture of Lenin, Mao and Stalin when US ambassador visited their headquarters. It indicated that CPN-UML wants red flags to cash the votes."

Although CPN-Maoist, a breakaway faction of UCPN-Maoist led by Mohan Vaidya, called a general strike to denounce the transformation of UCPN-Maoist, the party is said to be in negotiations with Nepali Congress to join the opposition front to launch the agitation.

Whatever the decision political leaders take at the top level, the present trend shows that Nepal’s politics is dominated by radical communist ideology. Although there is a different attitude in the leadership level, an overwhelming number of people at the grass root level are addicted to ideology of Lenin, Stalin and Mao.

"UCPN-Maoist is no more a communist party. They betrayed the idea of Mao's People's war. It is our duty to carry out the revolution through the People's War," said CPN-Maoist leader Mohan Vaidya.  Despite contradictions within, a number of Nepali young people are indoctrinated by the authoritarian ideology of Lenin, Stalin and Mao.

Considering anti-Indian orientation as a basis of Nepal’s nationalism and orthodox communist ideology as a base for political liberalization, Nepal’s overall politics is tilting to radical thought. If the last election of Constituent Assembly was any indication, it showed that Nepal’s communists had over 60 percent votes compared to 30 percent for Nepali Congress.

Despite sharing some common ideologies, CPN-UML tries to maintain differences with the Maoist. “We have to fight against the authoritarianism of UCPN-Maoist,” said CPN-UML leader Jhalnath Khanal. “UCPN-Maoist cannot be trusted for their democratic credentials.”

In the words of CPN-Maoist leader Mohan Vaidya Kiran, UCPN-Maoist has turned into another CPN-UML giving up all the earlier political stand.  “We are the only nationalist and communist party of the country now,” said Vaidya.

Despite their common stand in ideology, radical thoughts and anti-Indian felling, Nepalese communist has history of split and division more than any other liberal democratic party. The rift in Nepalese communist movement that began after the 1960 fourth convention still continues.  Communist parties split several times. There are a dozen communist parties now, along with CPN-UML, UCPN-Maoist and CPN-Maoist.

Along with differences in the communist front, there is so much common in interest at the grass root level and professional levels. The difference at the political level doesn’t stop them to stand jointly against its arch rival Nepali Congress and other parties.

Is red communism rising in a small corridor north of India, the world’s most populous democratic country? If the present political trend in Nepal is any indication, it seems that there is the rise of red communists all over Nepal.

From centuries, all walks of life in Nepal remained highly influenced by the ideas and ideologies dominant in the southern neighbour.  As the ideology of communism is spreading all over Nepal, the traces of political liberalism, religious and culture values inherited from the south are now vanishing.