Choupadhi On Its Way Out

It seemed that, in Far West, men and women, girls and boys, had a dual mentality about how to react to this practice. 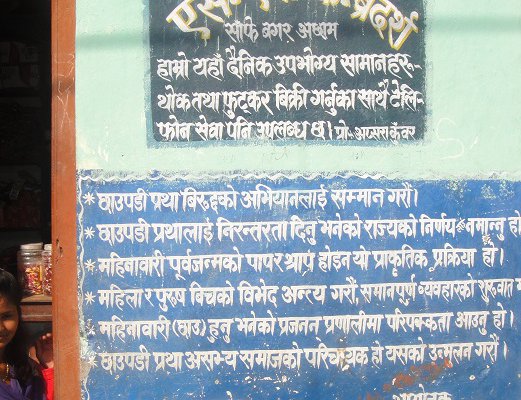 Sanfe Bagar, Achham. Krishna  Kunwar of Mastha Mandu village near Sanfe Bagar, Achham, a Female Community Heath volunteer(FCHV) was sitting inside the Chou Goth (photo attached), when we met her in the second week of November, 2012. She was preparing her bed in the Chou Goth. A young girl of 21 was with her.

"How can two people sleep inside this small room, one meter, by 1.5 meter," I asked. "That’s the way it has been for us for many years and we do not have any problem,” said Ms. Krishna.

"You are FCHV and you explain to other women in your community about the negative impacts of staying in Chou Goth, you had been honored for rejecting this practice. How come you are again staying in the Chou Goth? it will be a bad example for other women in your community. You also know that the government has made special plans to eradicate this bad cultural practice?" I told Krishna.

"Yes,  I once had told the women not to stay in Chou Goth and I also stayed inside the house  and I was honored by the Village Development Committee (VDC), but after staying twice inside the house during my monthly bleeding, my husband  and I fell sick and I  went to a local shaman to find the reason of our sickness . He told us that as I had stayed inside the house during menstruation and our God was angry. Since then I decided to stay back in Chou Goth. Now even if you give me a kilo of gold, I will not give up this practice," she answered.

Her remarks went to show that the policy made by the government and the work of Women and Child Department of Achham had little impact among some FCHV in some villages. The paradox is the father–in –law of Krishna Kunwar is the main person of the "Chou Goth elimination program ".

When I discussed with him, he said, "Yes, it is very sad that my daughter-in-law is still continuing this practice, but it is her belief and it is so difficult to change. But, at the same time, my another daughter- law, Apsara, has given up this practice and stays inside the house and there is no problem."

We were in the Mastamandu village in the second week of November with some people, who were part of the program for elimination of the Chou Goth practice. Our goal was to raise awareness against Chou Goth.

It seemed that, in Far West, men and women, girls and boys, had a dual mentality about how to react to this practice. One of the remote villages of Achham, in Ramaroshan, this practice has been eliminated. One school teacher and social activist, Ishwari Shahi, 47, a mother of three children, said, "I used to feel that the God will get angry if I stay inside the house during menstruation, but after ten years in Chou Goth, I felt that staying there will do me more harm. So I decided to stay inside the house. I made a separate room and have started to stay there. In the beginning, my decision was criticized. But I did not pay attention to this and now everybody stays inside the house. I am a school teacher and I continue to go to school and teach girls. Nothing bad has happened to me and now I feel proud that I was the first one to dare stay inside the house and now this Ramaroshan village is free from the Chou Goth practice.

It was sad to see that despite changes in remote villages of Acham, Sanfe Bagar and Mangalsen still saw Chou Goth existing and, here, even the FCHV followed the tradition for fear of getting sick.

There had been cases of rape of girls and women while they stayed in this small hut and it is a concern for the police. One police officer had told me when I visited Achham two years ago that the concern was still a reality. Many women with whom we talked raised their concerns that women and girls could be raped or attacked by tiger, but still it was difficult to make old mother – in –laws to understand that a girl should not be kept in Chou Goth. A woman activist , Ms. Sunita , 38 , who came to Achham from Dang after her marriage, said, "I do not want to continue this practice, but because of my in-laws, I still have to do so. But my daughter, who studies in Kathmandu, does not even tell us about her period, when she comes here to spend her holidays with us and that is fine with us.
It seems that young generation are trying to defy the old cultural practice.

Kali Kunwar, a 65-year old woman from Chandika VDC, was very much against the changes in the cultural practices in the beginning. When women and child welfare office tried to discuss the issue of harmful cultural practices, she did not even listen to them. But after a lot of discussion and information, Kali Kunwar finally felt that “keeping women in Choupadhi during menstruation was not a good idea and that the gods would not be angry if she allowed her daughter and daughter -in law- in side her house.” No sooner had she taken the bold step of allowing her family members to stay inside the house, the other women also followed her footsteps. In a ward, where there are 70 households, now no one uses Choupadi goth.  Being a good mother in law and a role model, Kali kunwar has been recognized by the government and was awarded with the title “best mother in law” in her community along with Rs 5000 for her work. She now, is a role model for her village.

Going to Acham and talking to many people on Chou Goth  practice, I felt that though the practice is still going on, there are some voices which speak against this practice and they are trying to make people aware about this. It may take another few years to eliminate this practice, but it will surely go away some day.