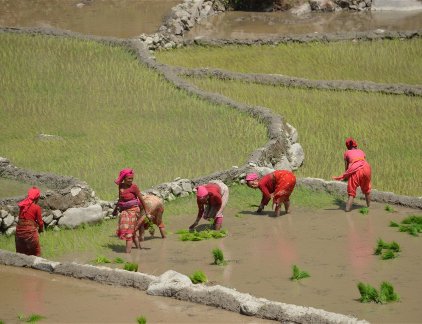 Climate Change. Global warming and climate change became the hot issues and were debated since 1995 when the United Nations Framework Convention on Climate Change (UNFCCC) of its first COP (Conference of the Parties) meeting was held in Bonn. Since then, the issue was discussed worldwide and also accepted by the scientific communities.

Scientific data analyzed by the Intergovernmental Panel on Climate Change (IPCC) provide compelling evidence that climate change is happening and that the observed acceleration is the direct result of increased emissions of Greenhouse gasses into the atmosphere from human activity. Projections of the effects of climate change show that LDCs, SIDS and Small Island Countries will be hit earliest and hardest. These are the countries and territories with the fewest resources to prepare for and adapt to, these changes in their climate. This means climate change is a major threat to meeting the Millennium Developments Goals (MDG’s) for many of these countries.

Climate change and poverty reduction remain the most important challenges of this decade. Mountain areas are particularly vulnerable to the impact of climate change. Snow and glacier-dominated mountains play a major role in providing water to large populations.

Nepal is a signatory to more than 20 environment related international conventions and agreements including UNFCCC, CBD and Sustainable Development. Nepal has been an active and committed member of all international environmental movements and has remained firm in fulfilling its commitments.  The formulation of policy framework, plan of actions, institutional setup for implementation, standard monitoring and evaluation arrangements for effective implementation and arrangement of high level coordination mechanism at the centre and also at district level indicate Nepal’s commitment to the agenda of sustainable development. Nepal’s environmental policies and programs have generally aimed at making a good match between economic development and environment. The incorporation of the strategic directions provided by the commitments and decisions of the high level committees can be observed in subsequent periodic plans including current three year plan and the policies and programs of Nepal. Accordingly, the government has encouraged the concept of green development to minimize activities that contribute to climate change, and reduce the negative impacts on human wellbeing.

Agriculture and Food Security. Agriculture and food security are one of the priorities for adaptation in Nepal, where more than 66 percent of population depends on agriculture and about 33 percent of revenue comes from this sector. The plan and policies gave emphasis to enhance agriculture production but there is lack of implementation and people did not get benefit and, instead, became poorer by depending on this sector. The present situation is that most of the migrant labourers going abroad for employment and income support for their livelihood are from this sector. A study shows that about 30 percent active populations are either unemployed or under–employed and 57 percent of the population are in the age of 15-59 years.  About 425 thousand new labour forces per year come in the labour market and about 1500 people per day are going aboard for job and employment and visible impacts are shortage of agriculture labour. On the other side, to increase agriculture production, irrigation, high breed seeds, labour, technology, market are the constraints. Investments in agriculture are very low whereas, the government’s priority is to double the budget without appropriate plans and programmes, institutional framework and coordination.

“Climate change affects green sectors more than other sectors of the economy. Agriculture production depends on nature and gets affected by the change in the climate parameters such as extreme weather events. Effects of climate change on agriculture and particularly agriculture and food provides the primary source of livelihood for large portion of weaker section of the society.

Threats and opportunities. To address the issues of climate change and food security, more investment, research and development in different varieties of agriculture products in different geographical locations such as mountains, hills and tarai are necessary. The present subsidy and support to the farmers are not enough. Crop insurance policy is not effective. Roads network is lacking and market linkage is weak and gaps exist between products and appropriate market mechanism. There is still 33 districts in food deficit. Due to lack of irrigation, agriculture production mostly depends on weather and rainfall. The impacts of climate change have not been addressed sufficiently and the results are clear threats in the future of food security.

Climate change is not only a threat of Nepal, it may also be considered as an opportunity for development. There are huge amounts of funds available at international markets, such as fast track funds, under the UNFCCC process, CIF, DFID, World Bank, ADB and other bilateral funds. Similarly remittance money can contribute both investment and employment to enhance agriculture productions. Commercialization in agriculture is needed and demands of organic products are high. Establishment of agro industry, food processing, and export based agriculture products can be contribute to upliftment of poor people in Nepal.

Research and Development in the agriculture is mostly needed in the context of climate change. Nepal Agriculture Research Council (NARC) can play a vital role to enhance agriculture production in Nepal despite changes in climate, weather and uncertainty of production. The proposed Agriculture Development Strategy (ADS), which is now in final stage, will also contribute to address these issues.

The High-Level Exchanges Between Japan And Nepal Have Been Progressing By Masamichi Saigo 3 days, 15 hours ago

Youth Engagement In Climate Change By Aagya Pokharel 6 days ago