"Effective observation is vital to ensure free and fair polls" 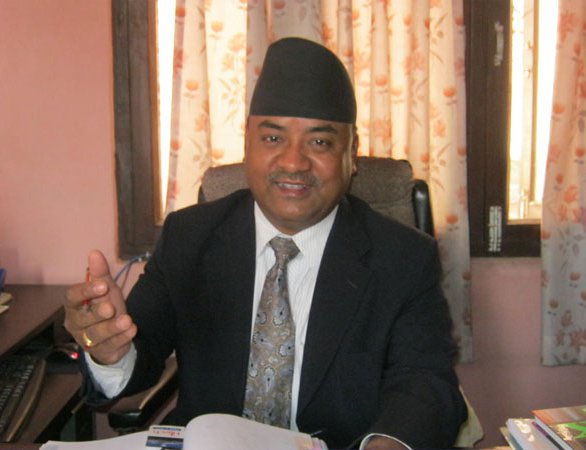 As the country prepares for new election, it is important that there is a strong monitoring to ensure it is held in free and fair manner. The role of election observers is going to be vital in this regard. With a long experience in election observation, KRISHNA MAN PRADHAN, executive director of Nepal Law Society and member secretary of General Election Observation Committee, Nepal (GEOC), is currently working to revitalize the GEOC to help in the organization of free and fair polls. Pradhan spoke to NEW SPOTLIGHT on various issues related to elections. Excerpts:

As a member of a leading civil society organization working to ensure free and fair elections, how do you view the upcoming elections?

There may have been different opinions on elections. But there is no option, before Nepali political parties, the civil society and even the international community, except holding the elections. The date of election may be postponed for a short period. But no one can deny the right of the people to vote in the elections for the Constituent Assembly. Nepali people want to write the new constitution through their own elected representatives.

Why do we need CA elections given the bitter experience of past when the elected CA failed to produce desired outcome?

Five years ago, the first CA election was held with the aim to guarantee the rights of women, Dalit, Janjatis, Madheshi, backward, and marginalized communities. The dissolved Constituent Assembly made immense contributions in constitution writing. In its four years, it was able to sort out a number of constitutional and political issues. The new elections are required just to complete the remaining tasks of constitution writing. The people will reject any constitution which is not written by the CA. Nepal has already written five constitutions in the past through committees. However, all these constitutions did not work because the people did not take their ownership. The CA is the only way to write a constitution for the people and by the people.  Thus, we believe that the CA has no alternative and the election is the only way out.

At a time when some political parties have warned of disrupting the elections, how do you see the possibility of holding them?

As new election government has already been formed and the chief commissioner and four other commissioners have already been appointed in the Election Commission, the process of conducting the elections has already begun. Chairman of the Council of Ministers Khil Raj Regmi has been consulting with various political forces to create an appropriate environment for elections. Similarly the Commission has already forwarded the draft of the new ordinance to amend existing election laws. Some major political parties have already kicked off their election campaigns.

What is the role the GEOC is playing?

Along with other civil society organizations, the GEOC has already started to revitalize its grass root level organizations in various parts of the country. We will start our elections monitoring process very soon. It will be unfortunate to oppose elections at this moment. According to present agreement between four parties, the CA elections will be held in June and local elections in November.

At a time when a strong political block led by Mohan Vaidya is launching the agitation obstructing the elections process, how can you say that there will be elections?

Since CPN-Maoist is also a political party, they will ultimately participate in the elections. Civil society organizations like ours will facilitate to bring all forces toward elections.  I think we need to address the voices of CPN-Maoist and other fringe parties.

What role will the organizations like GEOC play to make the proposed elections free and fair?

There will be a growing concern over whether the elections will be free and fair. Even the international communities are raising the question of free and fair elections. In his recent visit to Nepal, Chairman of Carter Foundation and former US president Jimmy Carter also raised similar concerns. European governments have also raised these concerns. Given the nature of the present government led by chief justice, there is no need to worry about the issue of free and fair elections. As Nepal’s civil society organizations like GEOC have enough experience of monitoring elections, there is no need worry about this.

What have your experiences taught you?

Why do we need early observation?

The election process starts from voters’ registration. Political parties will enroll as many of their voters in the constituencies as possible.  We want a close partnership with the Election Commission and political parties in the process of election observation.  Even after the elections, there will be several stages, including vote counting, declaration of the elected persons and victory rallies. We have already activated our grass root level institutions. Once the Election Commission announces the elections, we will formally launch the observation program. We have already contacted our former observers to prepare for the elections. We will update our volunteers. This time, we want to increase our coverage to 50 districts from the 35 that we reached previously.  We are now discussing with the Election Commission how to avoid duplication and repetition so that the election observers group can be mobilized throughout the country and increase its presence.

How do you see the role of international community to ensure free and fair elections?

In the past, Danish, Swiss, British, US and Netherland governments provided valuable support to us. They will again be involved in the coming elections. According to reports, there will be over 20,000 polling stations throughout the country and we need to deploy our observers in all the polling booths. I don’t think any single institution can monitor the elections. I don’t think it is possible to set up only one election observers’ network. There are several election observer networks. There is the need to have a better coordination among us.

How do you see the role of various other organizations in ensuring free and fair elections?

How do you see the role of GEOC?

After 1990, Nepal has already conducted three national elections for parliament, two for local bodies and one for Constituent Assembly. GEOC monitored all these elections in the past. It has a vast pool of experts who can observe how free and fair the elections become. Elections observation is not only to monitor vote casting, but the process of monitoring begins from the announcement of dates. Free and fair election is the heart of democracy. This is the reason all of us need to give the priority to this. We have to start the ground work to make the modalities for the observation. If the coming elections fail, they will have a very negative implication for the country.

There are several organizations in Nepal working in the area of elections observation. Is there any coordination mechanism among these?

If you look at the last elections, Nepal Law Society worked with DEAN, a consortium of various observer groups. Under the DEAN, we observed over 2,000 booths in various parts of Nepal. We constituted various institutional structures to monitor the elections in all 240 constituencies. We established regional offices in five regions. We had three levels of observers, national level, regional level and booth level, during the last elections. We continued to observe the elections for about a year launching the elections literacy campaigns and nationwide programs to reduce political violence during the elections.  We monitored the cycle of political violence that existed before the elections, during elections and after elections. We jointly worked with Election Commission, Ministry of Home Affairs, Nepal Police and political parties. It helped us to create conducive environment for free and fair elections.

What is the specific experience of GEOC in last CA elections?

Election Observation Committee (GEOC), an alliance of seven Civil Society organizations, also observed the elections. Observers were deployed to monitor the elections in 35 districts, covering 70 electoral constituencies. Members of GEOC included Nepal Law Society, International Commission of Jurists/ Nepal, Retired Civil Servants Association, Election Observation Foundation, Nepal Press Institute, Nepal Citizens’ Forum and Rural Development Foundation. There were over 1,000 observers involved in the election observations. Our past experiences have shown that there were more violence in the elections of parliament at the time of polling but there were more violence during or before the polling in CA elections. However, there was less violence in the polling days during CA. The coming elections will be different than the previous elections. In this context, the Election Commission needs to be more vigilant. If the Election Commission is given the full authority to cancel the elections, withhold the elections, it will drastically reduce the level of violence and rigging. We need to learn from the experiences in the elections.

Don’t you think the time has come to hold the local elections?

We can no longer deny the rights of the local people to decide their activities through the local elected bodies. I think the government has to hold the elections for local bodies together with national elections. For the past 16 years, the local bodies have remained under the nominated people and it has badly damaged the local governance system.