In a decade, except for times with Russia-based Upendra Mahato, Jeeba Lamichhane and few others, Non-Resident Nepalis have not made any significant investment and contribution to Nepal 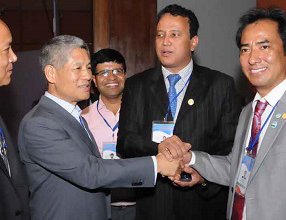 Although the Non-Resident Nepali Association (NRNA) claims to be an organization committed to bring resources and expertise to transform Nepal, the reality speaks otherwise and shows bitter results. In the last one decade, Russia based businessman Upendra Mahato, Jeeba Lamichhane and few others invested in various sectors contributing to give fame to NRN.

The first president and pioneer of NRNs Upendra Mahato donated his money in health, education and religious sectors. However, the same is not true with other NRNs who prefer more or less to get concessions and benefits from Nepal rather than solid contribution.

In all conventions, NRNs lobbied for dual citizenship and repatriation of property as their main agenda. Along with this, they even held their conference through government grant. The question naturally arises: where is the contribution then?

Although Indian, Chinese, Sri Lankan and Pakistani Diaspora are yet to get facilities like NRNs receive in Nepal, they have made a great contribution to transform their own mother lands. The current high economic growth in India and China is the result of the investment of their own Diaspora.

Had Nepal's poor laborers not been working in Gulf, Malaysia and South Korea and not remitting their money, Nepal would not have surplus foreign currencies. According to the report of Nepal Rastra Bank, over 80 percent foreign currency is coming to Nepal from these areas.  According to Federation of Nepalese Chamber of Commerce and Industry, NRN's investment in the last 10 years is just 30 billion.

"Nepal receives remittance in the tune of Rs 450 billion a year. However, a large amount of money is coming from informal channels," said Deputy Governor Gopal Prasad Kafle. "I would like to appeal to the NRNs to support in bringing remittance to the country through formal channels.”

Kafle also said remittance flow from South Korea, Australia and the United Kingdom is very negligible. He solicited the support of NRNA to encourage Nepalis to send money home through formal banking channels.

At a time when everyone is looking critically at the role of NRNA, Shesh Ghale, an Australia-based Non-Resident Nepali, was elected as the third president of Non-Resident Nepali Association (NRNA) defeating his nearest rival Tenzi Sherpa.  There are a lot of challenges before president Ghale, 55, the CEO and Executive Director of MIT Groups Holdings. He has already announced he would invest in Nepal in a five star hotel project.

"As the government has already formally registered NRNA, NRNs have now an obligation to show how they can make a difference here," said foreign minister and home minister Madhav Prasad Ghimire. "We hope NRNs come up with projects and investment."

NRN's assured that they will come up with investment. "NRN is a part of Nepalese society. We want to contirbute to make Nepal a prosperious country. In the last one decade, NRNs have already shown that where they can invest," said founding chairman Uprendra Mahato.

Out of 802 votes, Ghale bagged 510 votes against his rival Tenzi Sherpa, who acquired just 280 votes. Around 1,300 were eligible to cast their votes to elect a new NRNA leadership for the next two years.

The sixth general convention of NRNA also elected T B Karki and Bhawan Bhatta as the vice-presidents, Kumar Panta as the general secretary, Ranju Thapa as the secretary and Badri KC as the treasurer.

President Dr. Ram Baran Yadav said it is high time for NRNs to contribute to Nepal's overall development. As common people are evaluating closely the role of NRnA, newly elected chairman Ghale has a lot of challenges before him to prove that his organization can make difference.

EP DELEGATION Visit For Cause By A Correspondent 10 hours, 43 minutes ago