According to Edward C. Sachau, even though Abū Rayhān Alberuni enters the sub-continentaccompanied by Mahmud of Ghazni, there is little similarity in their tastes. 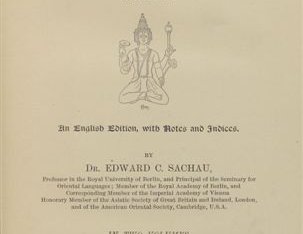 Abū Rayhān Alberuni (also known as Abū Rayhān al-Bīrūnī) and his writing about India and Hinduism. The book has only a couple of references on Nepal. However, these references are important in Nepalese historical context.

Alberuni was a famous medieval Islamic scholar. He is described as well versed in physics, mathematics, astronomy, and natural sciences. Alberuni also distinguished himself as a historian, chronologist and linguist. He accompanied Mahmud of Ghazni [971-1030], the ruler of theGhaznavids empire, when he started to conquer kingdoms of Nagarkot, Thanesar, Kannauj, Gwalior and Ujjain in early 11th century. Alberuni spent about ten years in the South Asian subcontinent and widely travelled this area exploring its religion, history and culture.

According to Edward C. Sachau, even though Abū Rayhān Alberuni enters the sub-continentaccompanied by Mahmud of Ghazni, there is little similarity in their tastes. Alberuni’s interest was deeply intellectual. However, Ghazni was a conqueror. He wanted either to convert the Hindus, the conquered subjects in this part of the world, or to kill them. Alberuni had nothing to do with this agenda. In fact, even when he was writing the book, the fight between Ghazni’s forces and the local subjects were going on. However, there is little in his book that discusses the ruthless war between Islam and the local kingdoms, “during which it had been prepared, and by which the possibility of writing such a book had first been given.”

Sachau also praises Alberuni for his independent analysis of what he saw in this sub-continent. His book is like a “magic island of quiet, impartial research in the midst of a world of clashing swords, burning towns, and plundered temples.” The object which the author had in view, and never for a moment lost sight of, was to afford the necessary information and training to ‘any one [in Islam] who wants to converse with the Hindus, and to discuss with them questions of religion, science or literature, on the very basis of their own civilization.'

Alberuni did not visit Nepal, or any place close to it. However, he mentioned about Kanoj, Nepal and Bhoteshar. Kanoj used to be a focal point for the three powerful dynasties, namely the Gurjara Pratiharas, Palas and Rashtrakutas, between the 8th and 10th centuries. It is not apparent what the modern name of Bhoteshar is. It is clear, however, that the word ‘Bhote’ in Nepali means people of the trans-Himalayan region. On the east of Kanoj, Alberuni mentionedof places called Badi, Dugum, and then the empire of Shilahat, and the town Bihat. None of these places exist now. He locatedTilwat [Tirhut] farther on the right of these countries. He described the inhabitants of Tirhut as ‘Taru’ [Tharu], and as “people of very black colour and flat-nosed like the Turks.” Farther South of the Tirhut is the mountains of Kamru, which Alberuni describedas stretching away as far as the sea. It is on the northern side of Tirhut, or the country on the left, is the “realm of Nepal.” Referring to a man who had travelled in those countries, Alberuni gave the following report:

“When in Tanwat [again misspelt for Tirhut], he left the easterly direction and turned to the left. He marched to Naipal, a distance of 20 farsakh [60 kilometer], most of which was ascending country. From Naipal he came to Bhoteshar in thirty days, a distance of nearly 80 farsakh, in which there is more ascending than descending country. And there is a water [course] which is several times crossed on bridges consisting of planks tied with cords to two canes, which stretch from rock to rock, and are fastened to milestones constructed on either side.”

“People carry the burdens on their shoulders over such a bridge, whilst below, at a depth of l00 yards, the water foams as white as snow, threatening to shatter the rocks. On the other side of the bridges, the burdens are transported on the back of goats. My reporter told me that he had there seen gazelles with four eyes; that this was not an accidental misformation of nature, but that the whole species was of this nature.” Alberuni describes Bhoteshar as the first frontier of Tibet. His informant informs him of a different language spoken there. The costumes and the anthropological character of the people are also not the same as in the southern slopes.

Alberuni mentioned about the Khas people, when he talks about the river Ganges, and the population it passes through. He wrote that the river flows through the Gandharva, the musicians, Kimnara, Yakshas, Eakshasa, Vidyadhara, Uraga, i.e. those who creep on their breasts, the serpents, Kalapagrama, i.e. the city of the most virtuous, Kimpurusha, Khas, the mountaineers, Kirata, Pulinda, the hunters in the plains, robbers, Kuru, Bharata, Pancala, Kaushaka, Matsya, Magadha, Brahmottara, and Tamalipta. “These are the good and bad beings through whose territories the Ganges flows. Afterwards it enters into branches of the mountain Vindhya, where the elephants live, and then it falls into the southern ocean.” He referred to Khas people again when he gave the names of the countries in the east.

Alberuni is the first foreigner to research on Hinduism. He is also credited as being a pioneer in the study of comparative religion. It is strange that there is no mention in his book about Buddhism being practiced in the mountains. It is another surprise that Alberuni had no comment on the Himalayas, separating the plains of the subcontinent from the Tibetan Plateau.

Many early visitors of the sub-continent wrote about many new things that they observed here. Nepal certainly does not go unnoticed even though in parameters not much known today. Starting with Megasthenes (350 – 290 BCE), a Greek diplomat sent by the Hellenistc king Seleucus Nikator to the court of the Maurya king Chandragupta, then a Chinese pilgrim Fa-Hsien (337 – c. 422 CE), then Hiuen Tsang, another Chinese Buddhist monk who traveled to this continent in seventh century, had already visited the sub-continent before Alberuni came here from Central Asia. Some others of his stature like Marco Polo visited the region in the 13th century, Ibn Batutah, the Moroccan explorer of Berber descent, visited in fourteenth century, Athanasius Nikitin, a Russian merchant followed him in the fifteenth century. English traveler Ralph Fitch and Carsten Niebuhr. A thorough research on what they had to say on Nepal of their time would have certainly been an interesting prospect.

PRASHASTI ARYAL Rising Poet By A Correspondent 1 month, 3 weeks ago

COVID-19: Protecting Workers In The Workplace By Patrick Belser 3 months, 1 week ago

The Chinese Constitutional Model at 1948 By 5 months, 2 weeks ago