As Nepal is in the process of constitution writing, Prof. Dr. Rainer Arnold, from University of Regensburg Federal Republic of Germany 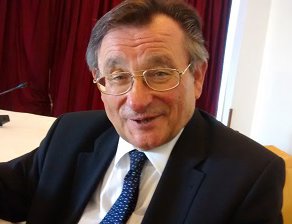 How do you see the importance of constitution in establishing the political process?

As Nepal has already experimented with six constitutions and now we are drafting the seventh constitution, in these circumstances, what do you think, is it the failure of the constitution or that of the habits and practices of political leaders and people?

Although the current constitution of Federal Republic of Germany has almost completed 65 years and it is still functioning as a well accepted document, this is something which is not the same with a country like Nepal where constitution is always victimized for the political interest. How do you look at this?

A constitution is an expression of culture of people of some society. The culture cannot be transposed from one country to another and one society to another. It is something which is born outside the nation or society or the people or multiplicity of the people. On the other hand, some values have become universal with regional differences of course. These universal values like democracy, self determination of individual in politics by democracy and human dignity and fundamental rights are  important. They are the universal values accepted all over the world.

As a constitutional expert with long experiences, what do you suggest for a country like Nepal?

If the constitution can be made by next year, it will end the transition in the right direction. Although it is a very short period, Germany also drafted the present constitution within a span of eight months. It was a very bad situation for us as German economy was down and the country was devastated by the war and it was a catastrophic situation. However, it was the will of the people to establish some fundamental orders like respect and dignity of human beings with democracy and regional identity with federalism helped to promulgate the new constitution in such a short period of time. This could also be done here. Nepal’s problem may be the many ethnic groups and linguistic groups living in all parts of the state. Thus, efforts must be made to satisfy them with their culture, tradition with political codetermination.

What are the important characters of German constitution?

The main features of the Basic Law are institutional stability, value orientation (human dignity) as the supreme value. Protection of fundamental rights, a modern rule of law concept assured by constitutional justice, open statehood (Germany as a part of the international and supranational Community)- cooperative federalism and the importance of local self governance are there.

There was recently a major controversy on Truth and Reconciliation Act which divided the society. Rights activists demanded to include universally accepted provisions and political leaders passed it declining to accept the universal values of free trials. Do you think international community will accept the local variant of rights?

As Nepal has already ratified universal human rights conventions, Nepal must respect the convention it has signed.  In Germany, we had also this question of giving blanket amnesty after Nazi regime. But, we prosecuted the persons involved in the crimes against humanity. I don’t think it is acceptable to International community to give amnesty to those who commit crime against humanity. Even if your country passes the law, it will not get much needed international legitimacy. Even decades after the Nazi regime, we are prosecuting those persons who were involved in the crime against humanity. Even Germany is prosecuting those who fired people crossing the border from east Germany to West Germany during the cold war. There was a debate after unification to give amnesty. Our society rejected it.

Nepal’s political parties are arguing that blanket amnesty is necessary to bring a long lasting peace. How do you see this?

Blanket amnesty cannot bring a long lasting peace. Impunity will bring harmful results. If somebody is found committing crime against humanity, he or she should be trialed in a free and fair manner in an open and competent court. Germany is still prosecuting those who fired gunshot to refugees crossing the Berlin Wall and Nazis. Many of secret agents of Nazis era were sent to prison for their crime. Similarly, German government is prosecuting those who were involved in crime against humanity during division of Germany. This kind of prosecution is going on in Poland, Czech Republic and many other eastern European countries. Crime against humanity is something which should not fall under amnesty. In Germany, it is unacceptable to give blanket amnesty.

As there are growing debates among political parties over the forms of the government- prime ministerial or presidential, what would be the workable for a country like Nepal?

As there are many checks and balances of power, my preference will be a prime ministerial system. As there is power concentration on president in presidential system, there is the possibility of misuse of power and rise of authoritarian tendencies. In Germany, political power is concentrated in the Chancellor, backed by absolute majority of parliament.  Federal president as a representative figure and he has right to dissolve parliament only in exceptional situations.

Having diverse ethnic groups in relatively small geographical areas, what types of federal structures do you prescribe for Nepal?

It is difficult to find a perfect federal system for such a diverse ethnic group. The member states of the Federal Republic Germany as states have autonomy and basic homogeneity with the structure of the federation. Federal system community should be strengthened with self autonomy incarnation. Germany’s federalism is based on the principle of cooperation, loyalty and solidarity.  Nepal needs to have a such system where there is mode of cooperation, loyalty as well as solidarity.

How do you see the importance of local self government in federal states?