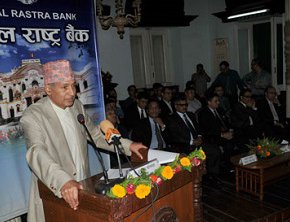 At a time when Nepal has continued to receive high flow of remittances, the excess cash has badly flushed the banking system.

Announcing the Monetary Policy for fiscal year 2014/15, NRB Governor  Dr. Yuba Raj Khatiwada revealed that the monetary policy has been tightened keeping in view the possible risks that liquidity surplus could pose in inflation as well as on and financial and external stability of the country.

The recently published report of Nepal Rastra Bank has shown that Nepal mobilized remittances of Rs 490.95 billion in the first 11 months of 2013/14 - a rise of 26.4 percent compared to figures of the same period of 2012/13.

Monetary policy refers to the course of action that the central bank adopts to control the flow of money and curb inflation when it is rising too fast.

NRB has increased the cash reserve ratio (CRR) requirement for the commercial banks and development banks to 6 and 5 percent, respectively. The central bank, however, kept CRR for the finance companies unchanged. Earlier, commercial banks, development banks and finance companies were required to maintain the CRR of 5 percent, 4.5 percent and 4 percent, respectively.

The new reserve norms mean more amounts of loan-able cash or deposit of the commercial and development banks would be stored in the central bank´s vault. Similarly, NRB has said it can bring ´Fine Tuning Operation (FTO) ´ as an emergency measure to manage liquidity of BFIs anytime if it poses the risk to financial stability or creates short-term interest rates volatility.

Among other things, the central bank has also tightened the flow of credit to the secondary market. “Earlier, we had left the lending decision on loan against shares on BFIs on their own risk and analysis of the market. Now, we have felt that the provision is too loose,” Khatiwada said, adding, “That is why we decided that such lending should be made on the basis of market price of shares.”

Upendra Poudyal, vice president of Nepal Bankers´ Association (NBA), said the monetary policy is conceptually fine as its thrust is on liquidity management. “However, we will have to see how it will be implemented,” he added.

As per the spirit of the budget, NRB has encouraged BFIs to increase lending to small and medium enterprises (SMEs). “The provisions would be introduced to make loan security or insurance more flexible and effective by offering more discounts on limit, security fee and loan provisioning for these lendings,” said the Monetary Policy.

Despite some good step, the Monetary Policy has some controversial and disputable points that will ultimately create a lot of problems in the banking sector which thrived in the recent years.

BEEN Energy Efficient Building By A Correspondent 4 days, 4 hours ago