YOUTH AND ADOLSECENTS: Worth Investment

Desperate and frustrated, Nepalese youth population are visionless and violence-prone. Along with this, they are vulnerable to HIV/AIDS, early pregnancy and all kinds of social evils. At a time when 10.3 million people of Nepal are aged between 10-24 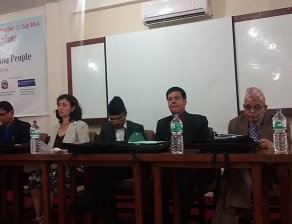 A group of students burnt the library of Tri-Chandra College, one of the oldest college or institution of higher education in Nepal. The fire destroyed many valuable books kept in the library.

The violence broke out when two student unions affiliated to ruling Nepali Congress and CPN-UML started a skirmish over personal matters. In retaliation, supporters of one of the student unions set the library afire.

Khushi Ram Tharu, 22, a resident of Kanchanpur District, was at the departure gate of Tribhuwan International Airport leaving for Dubai. After waiting for almost a year searching for job, Chaudhary, a School Leaving Certificate graduate, left the country for foreign employment.

"Had I found employment opportunity, I would not have left the country," said Chaudhary in desperation and frustration. There are no other options in the villages except for play carom boards or cards and drink. I get a better deal in Dubai where I can manage to make Rs. 300,000.00 year," said Chaudhary, a father of a two-year children.

Jamuna Rokaya, 18, from Rolpa died on the way to hospital due to complications related to delivery last week.

These three incidents are some of the common incidents which show where Nepalese youth and young population are heading. Out of 10.3 million or 33.1 percent population aged between 10-24, large numbers of youth are facing one or the other kind of problem.

Compared to urban youths, the rural youths are surrounded by many problems. Like Chaudhary, over a million people of this group working outside are relatively calm, those who are left in the country are exploited by the student unions of major political parties to gain political mileage creating chaos like in Tri Chandra College. As some major political parties have already threatened to launch political agitation, there is a possibility to exploit the youth in coming days to create social disorder.

However, adolescents, young and youth population are facing similar kinds of problems in all the districts. In terms of investment, these three groups of population enjoyed better environment in urban city than rural Nepal. However, unemployment rate among the youth and young remain similar in the region.

"One in every four households, 25.42 percent reported that at least one member of their households is absent or living out of the country. CBS report shows that the highest proportion (44.81) of absent population is from the age group of 15-24 years," said Kamala Lamichhane, Central Department of Population Studies, TU.

According to a report published by UNICEF and UNFPA, 620,000 children engaged in hazardous work, 12,000 girl children trafficked.

Similarly, 28.8 percent adolescents female and 6.8 percent male population are married. Fifty percent of children are subject to physical violence, 83.2 percent children who live in streets are illiterate and 23.4 percent of adolescents girls who have experienced emotional, physical and sexual violence and maternal mortality rate among adolescent girls of aged below 20 (per 100,000 live births) is 297.

As Nepal celebrated the world population day, there are numbers of grim reality about the young population. According to UNFPA's snapshot of adolescents in Nepal, one in four people are between 10-19 years of age.

Despite such huge problems, investment in youth is very negligible. As they are the human capital, the government needs to increase investment in their health, education and population.

Investing on youth and adolescents is in the interest of the country. "Had we invested resources in vocational education, the current level of remittances would have gone much higher. It is unfortunate to say that Nepal is unable to utilize demographic evident for the national development.”

Others too agree that there is the need to increase the investment in youth. "This year’s theme is so fitting for Nepal due to the fact that more than one-third (35%) of our population is below the ages of 15 and 57 per cent are between the productive ages of 15-59 years.

Governments and the international community are increasingly conscious of the importance of providing resources and opportunities for all young people to reach their full potential. They recognize that investing in young people and enabling them to exercise their human rights not only benefits young people themselves but can also help their countries reap a demographic dividend.

"We know that healthy, educated, productive and fully engaged young people can help break the cycle of intergenerational poverty. As skilled and informed citizens, they can contribute more fully to their communities and nations," said Giulia Vallese, representative of UNFPA to Nepal.

"Investing in young people also makes good economic sense. Young people can drive economic growth forward. Unfortunately, this is not currently the case in Nepal as hundreds of young people go abroad daily for foreign employment due to a lack of economic opportunities at home. In the case of investing in adolescent girls and young women, the positive effects go beyond labor force participation and productivity. Improvements in the status of girls and women lead to better maternal health, lower child mortality, and an increase in reinvestment to households and communities."

Others too hold the view that there is the need to have adequate investments in youth. "Nepal's youth and adolescent population needs further investment," said Dr. Badri Pokharel, former head of population division. "Currently, we need to make our budget youth friendly."

Justifying the need for investment in youth, many argue that only through investing in youth's health, one can make a difference. "Youth are the drivers of the development of any country. A healthy labor force strengthens the economy for years. Not investing in the health and development of adolescents contributes to the vicious cycle of ill-health and socio-economic deprivation. For example, girls from poor communities are more likely than those in more well-to-do communities to get pregnant during their adolescence. This in turn leads to loss of educational and employment opportunities, keeping them in poverty," said B. Dotel, chief FP and ASRH section.

“However, youth are also considered as the most vulnerable group,” said Dotel.

When the growing needs of increasing youth do not satisfy the availability of resources or if the state fails to offer sufficient jobs opportunities, youth frustration may be likely to come out in the form of violence and conflict.

“Despite accepting the fact that the youth are the power of the country, Nepal is yet to make adequate investment on them. We have the policies and programs, including Youth Policy, but what is lacking is its implementation. The time is running out and the government needs to act soon,” said Punya Bhandari, Youth Action Nepal.

Others too accept the fact that adolescents, youth and young need to take care. “If young are regarded as a strong force of the country, one needs to invest on them. This is a historic time for Nepal in terms of demography as Nepal has to work quickly to use the present demographic evidence,” said Professor Dr. Ram Sharan Pathak, head of Central Department of Population Studies.

As the fertility and mortality rates are decreasing, Nepal is in the third stage of the demographic transition model and the young population will continue to increase in the coming days. Given the present scenario where the youth are unemployed and violent, Nepal needs to invest more on this population on the basis of demographic evidence.