Stuck up with the tense relations between India and Pakistan and the question of China’s status in the South Asian Association for Regional Cooperation (SAARC), the region's leaders took no concrete decision on pertinent issues of poverty eradication 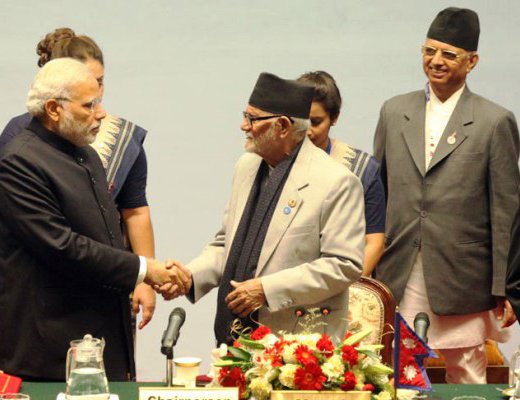 On reading the 36-point Kathmandu declaration issued by the 18th SAARC Summit, one will find it aims to address all the problems faced by the region. From poverty alleviation to climate change, connectivity to food security, anti-terrorism to regional integration, there is everything for all in paper but nothing concrete for implementation.

The connectivity of South Asia is so poor that one has to fly to Dubai or Dhoa to go to Pakistan's capital, Islamabad. Similarly, one has to fly to Bangkok to go to Colombo. Even the cost of air-fare of Kathmandu-Delhi is too expensive for the common people to afford.

In land connectivity, the situation is worse. Although the recent agreement between Nepal and India can facilitate the transport, the condition of the roads in the border area is so poor that the goods carried to Nepal from the bordering Indian city consume a lot of time, almost days to cross 200 kilometers and reach Nepal’s border. The border road is so bad that Nepalese exporters have to face a lot of difficulty to export goods to India due to the conditions of infrastructure in the bordering districts.

Let's not talk about the regional trade at the moment. Nepal still needs to send goods to Singapore for export to Pakistan. The situation is similar with Sri Lanka. India cannot export its goods to Afghanistan through Pakistan. Instead, it has to use another transit route via Iran.

Although the countries of the region have been facing natural disasters, there are rare chances of information sharing as well as forming joint committees to deal with, say, floods. Last year, Nepal, India and Pakistan faced severe floods. However, they faced the situation individually.

There are rampant incidents of trafficking of children and girls. However, there is yet to see a joint monitoring committee taking it up. A similar situation is there regarding the issue of terrorism -- the leaders talk much but they always ignore when times come for implementation.

In this scenario, South Asian Association for Regional Cooperation (SAARC) is no more than a regional club for talking. Recently, it is facing added diplomatic row over whether to enhance the role of observers, particularly China, which shares borders with five countries and watershed of most of the rivers of South Asia lies in the Chinese side.

Given the regional scenario, there is the need of effective regional bodies. Experiences have shown that South Asia cannot develop without close cooperation and integration. The reality is that such kind of close cooperation is still far from reality.

The sources close to Prime Minister Koirala told New Spotlight that Koirala made an informal suggestion to Modi to take the lead and break the ice with Sharif. For this, the Indian side said Koirala created an “enabling environment” at the retreat for the leaders to get together informally.

Asked about his role in attempts to end the chill between India and Pakistan, Koirala replied: “SAARC means a family. It is natural that hands and souls match here. It should happen and it is happening.”

The chilly afternoon of Kathmandu warmed soon after Pakistani Prime Minister Nawaz Sharif advanced towards the direction where Modi, Koirala and other dignitaries were interacting. Modi also walked toward Sharif. Both the leaders then extended their hands almost simultaneously. They kept on shaking hands with a wide smile on their faces.

Syed Akbaruddin, spokesperson for the ministry of external affairs, India, posted the picture on Twitter. "The photo all were waiting for," he wrote on his timeline.

It was a welcome break after continuous media coverage and speculations in social media that began since both the leaders cold-shouldered each other during the inaugural of the summit.

The mood of officials of both the countries was against any meeting. However, Koirala had not lost hope.  With advice from his foreign advisor Dr. Dinesh Bhattarai, an experienced former diplomat, Koirala quietly rolled his move to break the ice.

“It was the happiest moment of my life. We saved the SAARC from the brink,” Prime Minister Sushil Koirala told the media persons. “Nepal has not only hosted the eighteenth SAARC Summit successfully but given it a new lease of life.”

Although Nepal is unable to frame the constitution, it has shown that the country has the capability to organise the grand international summit. The security agencies including Nepal Army, Nepal Police and Nepal Armed Police handled the security and other civilian authorities completed their assignments to decorate the city.

With the population of 5 million and almost a million vehicles of various types, hosting such a mega summit is a big challenge in providing security to guests and smoothly running the life of the valley. However, Nepal’s state mechanisms have done so. Participating heads of the government and heads of the state, delegates from various countries hailed the management of the mega event.

Although this is the third time Nepal hosted the SAARC, the physical appearances of Kathmandu valley in the first hosting of 1986 and second hosting of 2002 were drastically different. When Nepal hosted the second SAARC Summit in 1986, the population of Kathmandu valley was 300,000 and the number of vehicles was not more than 20,000. Similarly the population in 2002 was less than 1.5 million and the number of vehicles was around 100,000.

Although there are so many shortcomings and unfulfilled promises, the 18th SAARC Summit concluded with the adoption of a 36-point Kathmandu Declaration with a pledge to deepen cooperation among member states in the core areas of trade, investment, finance, energy, infrastructure and connectivity.

When the 18th SAARC Summit opened, the situation was tense. The leaders of SAARC even did not see eye to eye.  However, finally the Summit concluded with a good gesture from all sides.

Although China has just an observer status, it has shown its dominating presence. With the massive investments and borders with five countries of South Asia, China’s presence was felt strongly in the 18th SAARC Summit.  Despite a proposal by Pakistan to include China and South Korea as full members, it was quietly rebuffed by India.

India's Prime Minister Narendra Modi has not welcomed Beijing's renewed suggestion for its status to be raised from "observer" in the South Asian Association for Regional Cooperation (SAARC), in which India is presently the only major power.

Modi's hope of using the group as a counterweight to China did not gain attraction at the two-day Kathmandu meeting.  Pakistan mooted the idea of upgrading China's and South Korea's status in the organization at a meeting of SAARC foreign ministers. It was quickly rebuffed by India.

"We need to first deepen cooperation among SAARC, before we try and move it horizontally," an Indian foreign ministry spokesman said. He said several countries agreed.

"China attaches great importance to SAARC's status and function," a Foreign Ministry spokeswoman told reporters in Beijing. "China is also willing to elevate the level of its relationship."

At a time when SAARC countries have been facing similar kinds of problems in areas like environment, climate change, natural disaster, poverty alleviation, and human trafficking, the top leaders of the SAARC member states are yet to come with joint efforts to fight the ills. Although the joint declaration has touched all different sectors, they are yet to show firm commitments to deal with them.

Like in all previous declarations, the poor club of the eight countries of the world signed common documents with commitments expressed in the paper. Past thirty years' experiences have shown that the key lacking in the regional cooperation is implementation of the commitments.

The leaders this time also expressed commitment to reinvigorate SAARC´s regional cooperation and revitalize SAARC as an effective vehicle for fulfilling the developmental aspirations of the people living in South Asia.

With Nepal having successfully hosted the two-day 18th SAARC Summit, Pakistan has agreed to host the 19th Summit in accordance with the alphabetical rotational arrangement among member states for organizing this regional event. The 18th Summit has elected Nepal as the Chair of SAARC till the next Summit is held.

SAARC member states have now agreed to hold the Summit every two years against the provision made in the SAARC Charter for holding the Summit every year. The member states have also agreed to hold the Council of Ministers meeting (Foreign Minister Level) once a year, the Standing Committee (Foreign Secretary level) meeting at least once a year and the Programming Committee (Joint Secretary Level) meeting at least twice a year.

The Kathmandu Declaration has agreed to accelerate the process of creating a free trade region, formulate and implement the projects, programs and activities of SAARC in a prioritized, focused and result-oriented manner and launch regional and sub-regional projects in the agreed areas of cooperation, mainly in the areas of poverty alleviation, infrastructure building, connectivity and energy. The SAARC member states have agreed to strengthen the SAARC Development Fund and ensure effective implementation of the SAARC Action Plan on Poverty Alleviation with a view to make South Asia free from poverty and hunger.

SAARC Summit has directed the SAFTA Ministerial Council and SAFTA Committee of Experts to accelerate free trade in goods and services in the region, putting into operation simplified and transparent rules of origin; implementation of trade facilitation measures; harmonization of standards relating to technical barriers to trade; and elimination of non-tariff and para-tariff barriers. The leaders renewed their commitment to achieving a South Asian Economic Union (SAEU) in a phased and planned manner through a Free Trade Area, a Customs Union, a Common Market, and a Common Economic and Monetary Union.

On the connectivity front, the SAARC member states have renewed their commitment to substantially enhance regional connectivity in a seamless manner through building and upgrading roads, railways, waterways infrastructure, energy grids, and communications and air links to ensure smooth cross-border flow of goods, services, capital, technology and people. The leaders emphasized the need for linking South Asia with contiguous regions, including Central Asia and beyond by all modes of connectivity and directed the relevant authorities to initiate national, regional and sub-regional measures and necessary arrangements, the Declaration states.

In view of South Asia continuing to face threats from terrorism, the leaders have resolved to combat terrorism in all its forms and manifestations and ensure effective cooperation among the member states for preventing trafficking in persons, arms and drugs and exploitation of children for forced labor. The member states also agreed to utilizing the youth power for socio-economic development, especially through creation of employment opportunities at home and building collective positions for their security and welfare while on employment outside the region.

The Summit decided to close down three Regional Centers, namely SAARC Documentation Centre in New Delhi, SAARC Human Resource Development Centre in Islamabad and SAARC Information Centre (SIC) in Kathmandu and transfer their mandates to the Secretariat and other mechanisms as part of reform at SAARC institutions and mechanisms for making them more efficient, effective and result-oriented.

Earlier, Indian media had reported that Nepal´s Prime Minister Koirala had taken initiatives to bring the two leaders together.  Finally, they did it in the closing moments. And, on that positive note the SAARC Summit concluded.