With the announcement of agitation by the UCPN-Maoist alliance, the possibility of promulgation of the new constitution by January 22 has come to an end and the new course for power sharing has begun 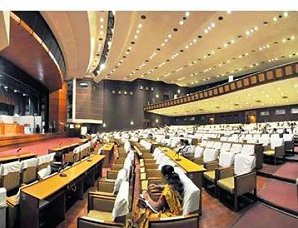 When UCPN-Maoist leader Pushpa Kamal Dahal Prachanda walked out of the all-party meeting from the Prime Minister's Residence on December 20, the possibility of the much sought-after consensus making process and promulgation of the new constitution by January 22 came to an end.

Even the Chairman of the Constituent Assembly rejected the possibility to promulgate the new constitution by January 22 in the given political circumstances.

The formal decision of UCPN-Maoist and Madheshi led 20 parties to launch a nationwide agitation, including Nepal Bandha on 13 January, with several local level bandhas, is a political climax to challenge the activities of the CA.

Although Nepali Congress and CPN-UML are insisting on the need to promulgate the new constitution by January 22, their rigid stand has further widened the gaps with the opposition.

Extreme stands taken by the NC-UML led alliance and UCPN-Maoist and Madheshi led alliance showed that the parties don’t care about the promulgation of the new constitution.

The disputed issues — forms of governance, judiciary, election system and federalism – were not new. They comprised a baggage that they had been carrying with them for a very long time. It was also this very baggage of unresolved issues that had ultimately led to the dissolution of the first Constituent Assembly in 2012. They still continue to carry that baggage.

With the deadline closing in, parties are going apart. Rather than being able to hammer out a compromise, they are hammering each other with charges and counter-charges.

Although the CA is elected for four years by the people, the present political trend is likely to end the relevance of the Constituent Assembly and its legitimacy. Just after the elections for CA II, the political alliances were made to create obstructions.

The validity of CA II came to an end after it decided to take the ownership of the tasks completed by CA I. Had CA I’s agreement been acceptable, there would not be any justification to hold CA II.

Although parties with communist ideology hold almost 70 percent of seats in the CA, they are running the show making unnatural alliances. Although CPN-UML’s natural alliance would have been with UCPN-Maoist and other communists and Nepali Congress preferable alliance will be with Madheshis, they are standing apart.

However it is a mythic possibility to end the present political deadlock -- Nepal’s political stability is at ransom of a two thirds majority or with the ruling alliance or the strength of people's sovereignty and political leaders’ arrogance.

The current political trends have also exposed to the Nepalese intelligentsia, civil society members and political parties that Nepal’s political state remains unchanged whether there is a monarchy, federalism and Constituent Assembly.

Given Nepal’s over six decades of history of democratization with five constitutions and four different political systems, what lesson history has taught Nepal is that its fate is prolonging instability. Although five years ago seven political parties and CPN-Maoist promised Nepalese people that they would promulgate the new federal republican and secular constitution through the CA, they are questioning all the principles they once agreed.

This time is not an exception. When the issues of making Nepal unstable is concerned, every political party with any political ideology joins hands.

It seems that Nepal’s politics has come to its own place. Despite seven years of sweet words for stability and prosperity, Nepal’s politics is heading back towards a confrontational course.  As usual, Nepal’s friends and Nepalese people missed the words written on the wall for a while.

Both the ruling and opposition parties are likely to push the situation to the point of no return by January 22, the self-imposed date to promulgate the new constitution. However, they are likely to secretly move their wheels for political power or change their alliances and form new allies.

This power sharing will dominate Nepal’s political scenario for another few months to come.  Given the current politics, Nepal will see a controlled anarchy for more time to come and Nepal will see neither stable democracy nor a crumbling system of anarchy.

PM OLI Survival Fight By A Correspondent 1 day, 5 hours ago

NEPALI CONGRESS Unjust Act By A Correspondent 1 day, 5 hours ago

Mandela: The Epitome Of Human Tolerance And Triumph By Mahesh Koirala 2 weeks, 2 days ago