While tourist and trekkers use the vaccine to protect themselves most local people are denied it.

The news that a promising vaccine has been tested against Ebola is very welcome. But, as we in Nepal know only too well, the development of a vaccine is no guarantee that it will be used.

Back in 1987, a successful trial of a typhoid vaccine here in Kathmandu gave the world a new and highly effective way to protect against one of its oldest killers. Yet, ironically, while the tourists and trekkers who have flocked in recent decades to Nepal — one of the countries where typhoid is still endemic — use the vaccine to protect themselves, most local people are denied it.

The Nepalese government cannot afford the US$10 doses of vaccine that could protect millions of its people. But the need is great — particularly since the devastating magnitude-7.8 earthquake that rocked Nepal in April. In many places, whatever water and sewage systems existed were smashed, and thousands of people still live in temporary shelters and camps, increasing the risk of consuming contaminated water. In recent months, the monsoon (when cases of typhoid typically peak) has made a bad situation worse, and there are sporadic reports of disease outbreaks. These could yet provoke an epidemic in the hardest-hit places, such as the Sindhupalchowk and Gorkha districts.

As typhoid spreads, so the risks increase. Most severely affected are school-age children, who are struck down with a fever and abdominal pain for several weeks. In time, most of these children recover, but many develop complications including hypotensive shock, perforation of the gut and gastrointestinal haemorrhage. Antibiotic treatment has reduced the fatality rate from historic highs of 20% to 1–4%, but studies suggest that some typhoid strains are becoming resistant. Antibiotics are sold freely over the counter in Nepal and so are widely misused. About one in three people who report to a Kathmandu doctor with suspected typhoid will already have (mis)used an antibiotic.

The aftermath of the earthquake has made many poor people even poorer. With no health insurance, the average Nepali family now has difficulty paying for an ill child to go to hospital. As a result, those children who develop typhoid complications are less likely to recover.Prevention is key.

The World Health Organization (WHO) said as much in 2008, when it recommended programmes to vaccinate school-age children against typhoid. A year later, the WHO South-East Asia Regional Office recommended that such programmes be prioritized for “immediate” implementation. Yet, despite several promises and false starts, this has not happened in Nepal.

The best way to prevent typhoid is to provide access to clean water and sanitation. But it will take decades for Nepal to put the necessary infrastructure in place, and the impact of the earthquake will make it harder still. In the meantime, wide deployment of a vaccine could be a useful — and lifesaving — measure. As part of the post-earthquake recovery plan, Nepal should kick-start a long-promised vaccination programme.

Part of the problem is that the typhoid vaccine recommended by the WHO — the one that was tested in Kathmandu — is among the most expensive. To buy and deliver enough doses, Nepal will almost certainly need financial support. This could come from Gavi, the VaccineAlliance based in Geneva, Switzerland, which is committed to increasing access to vaccination in poor countries, or from the profits of pharmaceutical companies. (Incidentally, another useful vaccine, against hepatitis E — a disease with a similar mode of transmission that can prove fatal to pregnant women — was also proven in Kathmandu. It, too, is unavailable to local people.)

At present, just one typhoid vaccine is approved by the WHO. It would be cheaper for Nepali health officials to deploy an alternative, not WHO pre-qualified, vaccine. It is unclear why they have not yet done so; perhaps they are reluctant to be seen to go against WHO guidance.

The decision to vaccinate — whichever vaccine is used — must be backed with solid research. Here, there is some progress to report. Early next year, a multi-site research project will start to map the burden of typhoid fever across Asia and Africa. The objective of this study is to quantify accurately the number of people with typhoid fever and complications of the disease in countries such as Nepal. This information will be useful for vaccination campaigns.

There are other pressing research needs, too.

With no new treatments in the pipeline, it is important to track resistance to antibiotics. This can be done with proper microbiological support including where possible, genetic studies of the typhoid isolates. Researchers must also study why some people suffer from the disease more than others. Last year, a preliminary genome-wide association study of people from Nepal and Vietnam implicated the

HLA-DRB1 gene as a major contributor to resistance against typhoid fever (S. J. Dunstan et al. Nature Genet. 46, 1333–1336; 2014). If the Ebola vaccine is as effective as it seems to be, the world will have developed a way to tame this awful disease within 40 years of its first appearance. Reports of typhoid date back almost 2,000 years, but the disease is still killing people. It is not just the new threats that deserve our attention.

Europe's Daily Deaths Rise By Nearly 40% Compared With Last Week – WHO By Agencies 5 hours, 32 minutes ago

Oxford's COVID-19 Vaccine May Get 'Emergency Approval' Before Christmas By Agencies 19 hours, 22 minutes ago 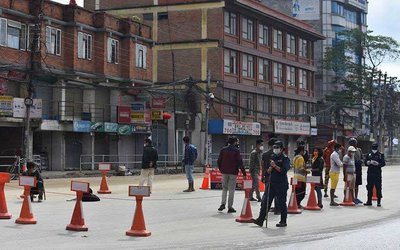