Many rhododendron and magnolia trees were in bloom with tiny gentians and primroses along the path. As you traveled from Ghandruk ( 6,600ft), to Chomrong ( 7200 ft) to Dhobhan ( 8350 ft) and beyond to the Sanctuary gates of the Machapuchare Base Camp

Cleanliness may be next to Godliness, but in a practical sense, cleanliness has attracted many trekkers to the Annapurna Sanctuary region. Of course the mountain-ringed amphitheater with a panoramic view of Annapurna 1 ( 26, 545 ft) and Machapuchere ( 22, 943 ft) among others, has helped to entice visitors. But lately cleanliness has played an important part in attracting trekkers here.

In this trek along the Modhi Khola and its tributaries, many Gurung villages dot the landscape with large campsites and tea houses with clean bathrooms and adequate water supply. The contrast with Kathmandu was stunning. Many rhododendron and magnolia trees were in bloom with tiny gentians and primroses along the path. As you traveled from Ghandruk ( 6,600ft), to Chomrong ( 7200 ft) to Dhobhan ( 8350 ft) and beyond to the Sanctuary gates of the Machapuchare Base Camp ( 12, 150 ft), the spick-and –span presentation was hard to believe. Some years ago this trek route had dirty bathrooms with toilet paper strewn across in many areas of the trail. But now there was a complete change.

This cleanliness has probably lead to less infectious diseases in both the locals and the visitors. I saw no one ( local or tourist) stricken with gastroenteritis, once a common problem. Even porters along the trail were brushing their teeth, something I had not seen in many years of trekking.

Most tea shop owners have tried to cooperate with one another to look clean and presentable  by picking up paper along the trail and collecting cans and bottles at designated sites. Anti- pollution measures were enforced. From Chomrong onwards it is not possible to buy mineral water because the plastic water bottles pollute and are unsightly. Impressively, it was not possible to bribe someone for mineral water. This is probably one of the few places in Nepal where there is no selective application of the law.  Ozone-treated drinking water is often available for those who do not wish to carry iodine tablets or drink boiled water for water purification.

However even along this trek, it was noteworthy to see how the tobacco industry relentlessly pursued its cigarette  sales campaign. A pack of Marlborough cigarettes which cost twelve dollars in New York sold  for two dollars here. Villagers smoking cigarettes (any brand) and cooking their meals in open hearths without a chimney will clearly suffer from more lung diseases.

A great trek. But remember to take elastic bandages and ibuprofen for sprains and strains along this undulating, magnificent, stair-cased trail.

Buddha Air To Fly On Janakpur-Ayodhya Route By Agencies 2 hours, 31 minutes ago 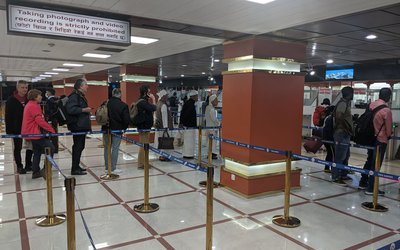 NAC Committed To Passengers' Safety By Agencies 4 days, 3 hours ago