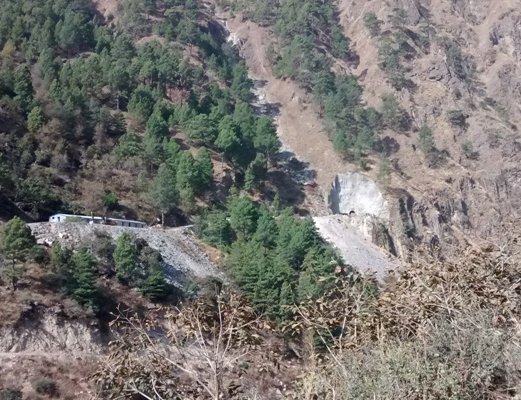 By KESHAB POUDEL, in Rasuwagadhi

At a time when Prime Minister KP Sharma Oli has announced that Nepal will be free from power load-shedding in one year, the construction work of a project with a capacity of over 111 MW, just over 100 kilometers north of the capital, is yet to resume due to the short supply of petroleum products.

With the short supply of petroleum products, caused by the blockade in terai, Rasuwgadhi Hydropower Project, which was at the fastest pace of construction, went stand still.

As the project halted, hundreds of workers mobilized for project construction left for home, which means, it will take some more months to resume the construction fully again.

Constructed by mobilizing internal financial resources, almost 25 percent of the work had been completed when the earthquakes hit the project, expected to be complete by 2018.

“We have already held several rounds of discussions with the contractors and they have mobilized 80 workers in a process of relocating the buildings and staff residence and mainlining the electricity line. They are also clearing the road to reach audit tunnel,” said CEO Koirala.

With the fuel crisis and material shortage, the construction work was stopped for almost two months. To run the project in full swing, it requires 12000 liters of diesel per week.

“As cabinet has already directed NOC to supply fuel, we are expecting the resumption of work this week,” said Koirala. Our project will take off soon after fuel is available for the project and we expect to complete it in schedule. I am proud that our project is in the right track, ready to take off."

Following the earthquake of April and May, along with Rasuwagadhi the construction of many other projects stopped. The shortage of fuel further hampered the projects.

Along with natural disaster and shortage of fuel, Nepal Electricity Authority’s weak leadership is also responsible for the present delay in the project construction. Due to tussle between NEA Managing Director and Ministry Energy, the board of NEA is unable to take major decisions.

As Nepal Electricity Authority’s management is mired in controversy and Ministry of Energy lacks a clear cut policy, one cannot say what course will projects like Rasuwagadhi take in the future.

PRASHASTI ARYAL Rising Poet By A Correspondent 1 week, 3 days ago

COVID-19: Protecting Workers In The Workplace By Patrick Belser 1 month, 4 weeks ago