Despite claims by Prime Minister K.P. Sharma Oli that his India visit set things right, certain frictions in Nepal-India relations remain where they were 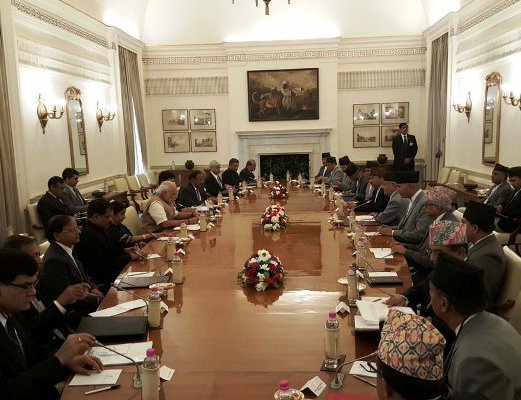 On completion of his 6-day visit to India, prime minister KP Sharma Oli declared that his visit cleared the misunderstanding with India and brought the bilateral relations between the two countries back on track.

However, India is yet to issue any reciprocal statement to that of Prime Minister Oli. During his visit nine different bilateral agreements were signed, including one to support the earthquake reconstruction.

“The misunderstandings which persisted in the last few months are no longer there. It is high time that we look at India-Nepal relations with a forward-looking approach,” Oli said at a news conference.

However, Indian foreign secretary S. Jaishankar held a different view. He said that Oli briefed his counterpart on the political situation in Nepal and centered around the new Republican Constitution. "The issues are still being addressed. Others are to be addressed, but the effort is there to address all issues."

Although Nepal and India agree on almost all the issues, the differences that had arisen between the two countries are yet to die. Prime Minister Oli claimed that the new constitution, which was endorsed by over 80 percent of CA members, addressed all the concerns and issues of all communities including Madheshis.

Indian Prime Minister Narendra Modi said, “After a decade of struggle, the framing and promulgation of the new constitution is an important achievement. I congratulate Nepal government and the political leadership as well as all sections of Nepali society for their contributions in its development.  But its success depends on consensus and dialogue. I am confident that you will take Nepal on the path of peace and stability by resolving all constitutional issues on the basis of these principles through political dialogue and by taking along all sections of Nepal.”

Giving importance to security issue, Indian Prime Minister Modi has made it clear how stability of Nepal loomed large over India’s security.

“It is clear that Nepal’s stability is linked with India’s security, prime minister Oli and I agree that the two countries will fight growing extremism and terrorism together.  We will not allow terrorists and criminals to abuse our open borders. In this context, the security agencies of the two countries will intensify their cooperation,” said Indian Prime Minister Modi in his statement.

With the visit, there is a thaw in Nepal-India relations. “This visit helped to clear the misunderstanding between the two countries on several issues. Although there still exist certain misunderstanding, it will be clear once the current prime minister works to accommodate all the forces in the constitution,” said Professor Sangita Thapaliya of Jawaharlal University New Delhi.

Indian Prime Minister Modi also expressed his strong desire to support Nepal in its reconstruction and recovery program.  “The earthquake hit Nepal, but its pain was felt by every Indian,” said Indian prime minister Modi, who sent a strong rescue team a few hours after Nepal was shaken by the earthquake of April 25, 3015, while referring to its pledge of $1B assistance package.

Nepalese Prime Minister Oli also thanked Indian prime minister for quick response during the earthquake. “Nepal and India have a natural and civilizational relationship,” said Prime Minister K.P. Sharma Oli. "As close neighbor, we can overcome all the problems.”

Foreign relations experts in India said Modi government engaged Kathmandu at the highest political level as China was increasing investment in the infrastructure, energy and other sectors of Nepal. There is a consensus among Indian strategists and experts that China's involvement in the Himalayan country could facilitate the emergence of the China-Nepal nexus against India.

“I am confident under your able leadership; India-Nepal relations will further strengthen and attain new heights. India's assistance has always been constructive; our actions have been in line with the priorities of people of Nepal,” said Indian Prime Minister Modi.

During the visit, Nepal and India exchanged seven agreements for partnership and progress. The agreements include:

2.     MoU for strengthening the road infrastructure in Terai area of Nepal,

3.     MoU between Nepal Academy of Music and Drama and  Sangit Natak Academy,

4.     Letter of exchange on Transit routes, Transit between Nepal and Bangladesh through Bangbandhu corridor and operationalisation of Visakhapatnam Port

5.     Letter of exchange for rail transport: Rail Transport to and from Visakhapatnam, rail transport facilities through Singhabad Nepal’s trade with and through Bangladesh

With his recent visit to southern neighbor India, Prime Minister Oli is preparing for his next visit to Nepal’s northern neighbor China.  As the visit of Oli is scheduled for March 20, a bilateral meeting between the senior security officials of Nepal and China concluded at the Ministry of Foreign Affairs.

In the meeting, Nepal briefed about its one-china policy assuring that no anti-China activities will be allowed in Nepali territory.

“Issues related to bilateral ties, border security, among others, were discussed in the meeting,” said Jhabindra Aryal, head of the North Asia Division at the Ministry.

On the occasion, the Chinese side urged Nepali officials to be more alert about not allowing any anti-China activities as religious, cultural and other fairs would be celebrated in coming March.

The Chinese delegation was led by Director General of External Security Affairs of Ministry of External Affairs of China, Liu Gaungyun and Chinese Ambassador to Nepal Wu Chuntai.

As the visit of Prime Minister Oli has indeed significantly reduced recent differences between the two countries on the Madhesi issue, how Prime Minister Oli can assure Chinese leaders of their security concern in his upcoming visit determines the future course. India will closely watch Oli’s visit.

With the normalization of trade with India, Nepal Rastra Bank has revised the inflation target for this fiscal to 9.5 per cent. Following the supply disruptions along Nepal-India border points, the prices of consumer products went up higher.

Launching the annual Monetary Policy in July, the central bank had said inflation would be contained at an average of 8.5 per cent in the fiscal year. But after supply system was disrupted by blockade at the border points, prices of almost everything went up, with inflation hovering around 12.1 per cent in January.

“Lately, however, the supply situation has normalized. This will gradually subside the pressure on prices. But effects of price rigidity, depreciation in the value of Nepali currency and post-earthquake reconstruction activity, which is expected to increase demand, are likely to build inflationary pressure,” said NRB Governor Chiranjibi Nepal in a function organized to conduct mid-term review of the Monetary Policy.

Earlier, the central bank had predicted money supply to increase by 18 per cent. “But because of rise in flow of remittance income and foreign loans and grants, money supply is expected to go up by 21.5 per cent in the current fiscal year,” Nepal said.

Despite the rise in money supply, domestic lending is not likely to expand in the manner predicted at the beginning of this fiscal. “This is because of slackness seen in economic activities,” Nepal said.

One of the reasons for lower credit growth is deceleration in capital spending of the government. The government spent only 6.5 per cent, or Rs 13.63 billion, of the capital budget in the first six months of the current fiscal year through mid-January because of supply disruption, which created shortage of petroleum products, construction materials and other goods.

Because of this, the government’s treasury surplus stood at Rs 81.89 billion in the six-month period. Since the government is sitting on top of piles of cash, it has not been able to raise debt from the domestic market.

“This has prevented NRB from floating securities, such as bonds, which is expected to affect liquidity management drive of the central bank,” Nepal said.

The government had earlier said it would raise Rs 88 billion from the domestic market to finance its expenses. Against this backdrop, bankers were expecting NRB to introduce measures to mop up excess liquidity, which has also exerted pressure on deposit rates.

“The problem of excess liquidity is not a long-term problem and the level of excess cash is expected to come down once government spending picks up. But if the situation worsens, then we will issue NRB bonds to mop up excess funds,” Nepal said.