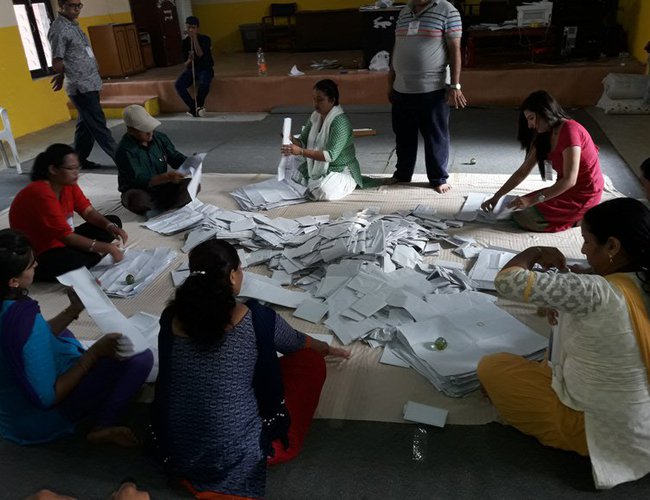 On the eve of the local elections, King Gyanendra sent out a tweet dispelling rumours that he was going to vote for a particular party. Effectively his tweet said: “As King of Nepal, I am not for any particular party; I am, as per Shahabamsha parampara, for the one(s) the people of Nepal choose freely and thus cannot vote for any personal favourite.” Easy for him but not so for the rest of us Nepalis.

We fought for the right to choose who runs our government, not just in 2006 but also in 1990 and even a generation earlier in 1951; and that right cannot be easily surrendered but must be exercised even if the sight of the candidates on the list churns our stomachs. We have not yet managed to wrest from the big party oligarchs the right to a “none of the above” box in the ballot paper. Such a possibility would trigger the most democratic ‘California clause’ where fresh elections would have to be held if that total rejection vote is the highest among all votes cast, with none of the candidates on that list allowed to stand anew. We have also not been able to hold our party politicians to even low standards of public probity, political accountability and ideological integrity. Despite all that, we cannot give up our right to choose who rules us and for what fixed term as well as the right to change our minds and vote for someone else in the next round of elections: we are, after all, not bonded serfs of our neo-feudal party oligarchs!

We have also not developed the public awareness of what voting in a democracy is and is not. It is not a lottery draw or a horse-race where you bet on a probable winner: it is about you, an individual, expressing your political values and beliefs and transferring that to the shoulders of a trustee you have faith in to uphold those values for you for the next five years, and only the next five years. Unfortunately, even well-educated friends and relatives were behaving as if this was a horse-race, thus exhibiting a slavish bias towards the corrupt, neo-feudal oligarchs and their fiefdoms.

So it was with deep skepticism that I voted, rushing from the airport with no taxis or private car allowed that day (I had just flown in from NayPiTaw, the new, near sterile capital of Myanmar) to make it in time to cast my vote at my Patan Dhoka booth that was set up in the shadows of the Pimbahal Chaitya built by Emperor Ashok twenty-three centuries ago. And while this column is being written on a train from Berlin to Dresden, there is a good chance that it will have already come out in print this Thursday before the tediously long vote counting has ended and the results announced. So, I make no forecasts but only serve you musings about why this election was so inappropriate on so many counts.

Let us start with the obvious: the ballot paper which was the size of a folded out daily newspaper with over a hundred cells with symbols. It was obvious that the layout was biased in favour of the big parties listed with one symbol on the very top. If one felt, as I did, that the big new-feudal Kangress and Communist parties had lost it and was looking for fresh new faces, it was near impossible to find the symbols one was looking for unless one was also a Sudoku master. New parties such as Sajha or Bibeksheel, which were allowed to register were, however, not given a single symbol for no justifiable reason. It was the Loktantrick biggies doing to others what it claimed the Panchayat did to them in 1980: you can fight elections but cannot do so under one symbol, thus raising their campaign cost and brand non-recognizability manifold while preserving their own cartel politics.

Another more political reason why this was a flawed election was that it was for the lowest third tier of government that will not be able to function effectively without the middle Pradesh level devolving unto them the requisite authority, a Pradesh that does not currently exist, but which the constitution stipulates it must. And, if for some reason the second half of the elections in a month’s time cannot be held because of unsettled political issues with those in Pradesh No. 2 or Janajatis east and west, this election that so many participated in so enthusiastically may become null and void.

While a handful of neo-feudal oligarchs may sit in their dark lairs and decree that they have devolved those power (highly doubtful as they have an inherently non-democratic streak that believes in the dictatorship of the party’s politburo or the kitchen cabinet high command), what legitimacy will it have on Nepal’s current fractured politics? The right thing to do would have been to hold national level elections first within a month or so after the new constitution was declared (which does not recognize 601 parliamentarians or a cabinet bigger than 25) instead of allowing the old parliamentarians to fulfil their hunger for the perks of office for three extra years! Then the Pradesh elections should have been held and then only this local one.

While apologists for Loktantra say this local election was a vindication of real democracy, that it is for local governance units and not for administrative ones as under the Panchayat or Multiparty Democracy since 1990, this saying won’t be vindicated unless the Pradesh and a future national parliament properly constituted under the new dispensation say so. They forget that local bodies can only work on local issues with local resources only to a limited scale as they would need resources from the national level (as well as legal and expertise backing) to do any of the grandiose things that the candidates have promised. They also conveniently forget that the King’s government actually held local elections in February 2006 (just as another had brought about an indigenous ceasefire without the tutelage of the Mughlani Sahu!). Yes, the big parties boycotted that election (which was their right); but not only did it demolish their claim that elections could not be held because of Maoist insurgency, it also exposed their thoroughly non-democratic nature. As publicly stated on TV and print by Maoist Supremos Prachanda, Baburam and Dinanath Sharma, the seven parliamentary parties, not only boycotted the elections but asked the Maoists to kill candidates to scare the voters, which the Maoists did do. This charge has, to date, not been denied by any of the seven parties!

It is obvious that the main reason this round of local elections was held was because the big party oligarchs were not able to withstand the pressure of political aspirations of the 18-40 age group that had been suppressed these last twenty years by them. I have been disgusted by engineers and doctors conducting their association elections by political party panels, and have always voted across panels not for monochrome ideologies but for individuals across panels in a manner I choose to call chhyasmisbad, i.e. mixed, motley voting. Since party ideologies don’t mean anything in today’s Nepali politics, the only other criteria is whether a candidate is not corrupt, is fresh and young so one can give him or her the benefit of doubt. Former Mayor of Kathmandu PL Singh recently travelled to most of the districts of Nepal and had this pithy comment in a newspaper op-ed piece: “The net result of Loktantra seems to be that the big parties have managed to fully train their local cadres in corruption!” What a great reason for chhyasmisbad voting! And how difficult the neo-feudal big party oligarchs made it to do so, not only for fresh young candidates but also voters like me!