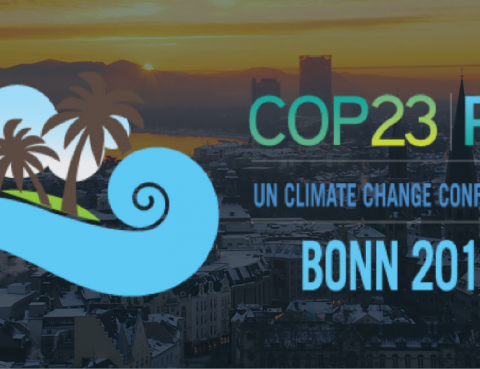 Presided by the island country for the first time in CoP’s history, the Bonn Conference made several decisions as usual to advance the implementation of these legally-binding instruments with Fiji Momentum for Implementation. The CoP initially gave key priority to progress on modalities, procedures, and guidelines for operationalizing and implementing the Paris Agreement, after the political withdrawal of the US from this Agreement. However, Parties recalled 2017 climate-induced disasters such as a more intense hurricane, monsoon, and drought, including loss of human lives, properties, and ecosystem services, 'cost of inaction, record-breaking global temperature, and increased greenhouse gas (GHG) concentrations. Delegates and participants voiced the need to take urgent actions to reduce GHGs emissions, lower down temperature rise, and ensure the survival of most climate vulnerable communities and urged to deliver more for the poor.

Parties agreed to advance the implementation of these instruments. Germany, Sweden, and Belgium have pledged support to Adaptation Fund and the 'empty' LDC Fund, dedicated only to LDCs. As per the Convention, developed countries should provide finance and technology to the LDCs.

The Fiji Presidency will conduct 'Talanoa' dialogue in 2018 with the participation of Poland Presidency for CoP 24, which was most welcome 'to increase pre-2020 action and support' to limit the global temperature increase to below 20C above pre-industrial level – an objective of the Paris Agreement – and continue to generate political momentum.

Recalling the adverse impacts of climate-induced disasters, initially, LDC group, as usual, urged to implement loss and damage, flagged its concern on finance, technology, and capacity building, and urge for replenishment of LDC Fund as per the commitment in the Convention.

Presidents, Prime Ministers, and Ministers, including UN Secretary-General, made statements during the High-Level Segment, opened on 15 November. Ethiopia on behalf of the chair of the LDC Group called, inter alia, for making substantive progress from what we have done and avoid back-tracking on issues at all costs, welcomed Gender Action Plan and the Indigenous Peoples' and Local Communities' Platform and progress on agriculture.  Progress made in developing 'ruleset' that should be completed by the end of 2018 to guide countries to implement the commitments made in the Paris Agreement is noticeably slow. The LDC Group negotiates on behalf of 48 LDCs. Ethiopia organized a meeting of LDC ministers in Addis-Ababa on 5 October 2017 and prioritized negotiating issues for CoP 23. On 15 November 2017, it updated Ministers, present in CoP 23 on key issues, to facilitate negotiation at the political level. The briefing focused on LDC positions on 'rulebook' for the implementation of the Paris Agreement, climate finance, loss and damage, and gender action plan.

The Nepali delegation led by Minister for Population and Environment Ms. Mithila Chaudhary made a country statement during the high-level segment (15-17 November), and some delegates took part right from the LDC pre-sessional meeting on 29-30 October 2017 and spent 3-weeks in 'cold' Bonn but 'hot' negotiation.

In her statement, the Minister informed the international community on additional threat to people and ecosystems in Nepal from climate change, showed concern on slow progress in Convention implementation, inspired from promotion of renewable energy, called for urgent actions to maintain temperature increase below 1.50C, and urged to collaborate with countries having rugged mountainous terrain and limited technology to enhance adaptive capacity and build climate-resilient future.

As of 15 November, 25 Nepali were registered in the government delegation with members from government, academia, NGOs, and media. Interestingly, the Government called back Dr. B.N. Oli, Secretary, MoPE to Nepal just before two days the Conference ended.  Such a situation does not happen normally.

It is very important to implement what is agreed in negotiating rooms to reduce climate change impacts. However, greater efforts are required at country level to clearly understand what was negotiated and how to translate them into action.

Diplomacy Changing Guard By A Correspondent 2 weeks, 4 days ago

Resignation of Prime Minister Padma Shamsher and the Fate of his Constitution By Dr. Bipin Adhikari 2 weeks, 6 days ago

Resilience And Poverty In Kathmandu: The Story Of An Encounter By Benoît Clémencin 3 weeks ago