For this writer, larger issues of congestions are far away from our thinking and the solutions sporadically proposed such as road-widening, altering hours or promoting mass transit- yes mass transit definitely help to reduce congestions 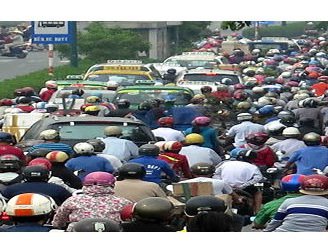 “Yes, trading does contribute but the vehicles used other than by enterprises (public or private) exclusively for production process do not contribute to Gross Domestic Product (GDP) and the economic growth and prosperity”

The day after day I retired from Asian Development Bank in 2006 December, I landed at Tribhuvan International Airport. While waiting to be cleared from immigration and customs formalities, I rang one of the auto-shops in Thapathali to sell me a car. I further told that I want it to be immediately sold so that I can drive on my way from airport - from Thapathali to my place at Kalanki. The shop said yes. I took a taxi up-to Thapathali then got out of it. I entered into shop. The car was ready. I bought it instantly and drove home.

While other cities like Birgunj, Biratnagar and Nepalgunj have also started experiencing congestions, the capital city Kathmandu’s congestion has become a chronic one. Few people are proposing some solutions like road widening, altering working hours of schools, private sector and the government. One or two have also whistled about the need to discourage small transit and encourage and expand mass transit. However, most of the people, for that matters government officials and their political masters, have not taken the never solving issue of congestions seriously.

For this writer, larger issues of congestions are far away from our thinking and the solutions sporadically proposed such as  road-widening, altering hours or promoting mass transit- yes mass transit definitely help to reduce congestions. In this connection, this article attempts to highlight some measures to help minimize the congestions that Kathmanduties are facing 24/7. In proposing mitigating measures for avoiding congestion, this article borrows some ideas- just ideas, from Singapore. Singapore too has an open economy, property rights and other fundamentals that one of the successful and prosperous countries need to have for the all-round welfare and prosperity the country and of its citizen.

First, road widening is necessary. However, widening in isolation will not lessen congestions. Though they are dusty and muddy, the roads in Kathamndu have been widened. Congestions worsened if not continued. The reasons could be many. However, major reason is: all roads are not geometrically aligned. Therefore, a foremost need is to immediately start realigning all roads in Kathmandu geometrically and scientifically.

Second, owning private vehicles and also buying a vehicle for government officials, other than those used directly for productive works by the enterprises, need to be managed.  In other words, each year, government needs to make an assessment of the numbers of vehicle requirements of the country. Once this assessment is done, then the government, in consultation with the private sector, needs to divide the numbers of vehicles required between individuals (private) and the government.

Third, number of vehicles to be imported by individual needs to be auctioned. Not only we need to auction the rights of imports by individuals, we also need to make sure that the individual who is participating in import auction, must prove that he or she has got tax cleared or tax paid monies to buy the vehicles, a certificate from the municipality that he or she has own private provisions, land or space for parking. Also, we need to make sure that the potential buyer has a driving licenses issued under his or her name.

Fourth, the registration number assigning also need to be put under auction. In other words, a new car to be registered is likely get, say no. 555. In this case, the registration office should make a public call to bid this number from those who were approved for vehicle import or purchase. The number should be given to those bidding high. This would not contribute much in reducing congestion but would definitely help generate more resources to make transport management efficient without exerting pressure on the government exchequer.

Fifth, increased number of small vehicles not only lead to chronic congestions but also make more pollution. To lessen this polluting part, the government needs to impose increasing insurance premium – nearly 50 percent of vehicle price, beyond 10 years of purchase of vehicles.

Sixth, with a loosely made decisions, government employees who are joint secretaries and above are entitled to a dedicated vehicle. Rest of the employees have been provided with staff transport service. However, there are leakages- those who are not entitled are also driving a single vehicle, and those entitled, many of them, have multiple vehicles under their personal disposal. This needs to be audited thoroughly and rules imposed strictly.

Seventh, along through auctioning system and imposing of a higher insurance premium, there is also a need for differential fuel pricing - and a higher rate of customs-  a higher price for private vehicles than the public vehicles.

Tenth, traffic rules compliances are very poor in Nepal especially in Kathmandu. Three measures, though there could be more, can be immediately introduced- one, no overtaking from the left; two, allow only one turning, either right or left from start to end, and third, install traffic lights- traffic lights are more effective and efficient than the cops stationed at the junctions or at the crossings.

Finally, there is no alternative, an effective alternative, of mass transit. A double decker bus, for example, can take about 70-80 person on board whereas a minibus about 25 persons, a micro bus about 10 persons and a taxi or private car’s capacity is 2-3 person.

In conclusion, one, especially the policy makers, must realize that only narrow roads are not the culprits causing traffic congestions. Many capital cities, for example, city roads in London, inner Paris and Rome, have narrow roads but no traffic jam or congestion.  Mass transit is a better solution. Equally better solution could be introducing policies that have worked in other countries. Most of us might have started thinking that traffic congestion in Kathmandu is our NIYATI (fate!). I do not think it is a fate. It is a man-made problem. And, it is also a failure and failures of policy makers and advisers to policy makers, instead.

The opinion expressed in the article is personal opinion of the writer.

Why Focus On Water Storage? By Dipak Gyawali 6 days, 5 hours ago