As It So Happens

If we are going forward, and that’s what the America-returned youth tells us, then it’s time to lead an assault on superstitions that put women on the back foot. There are so many it’s hard to choose where to attack first! 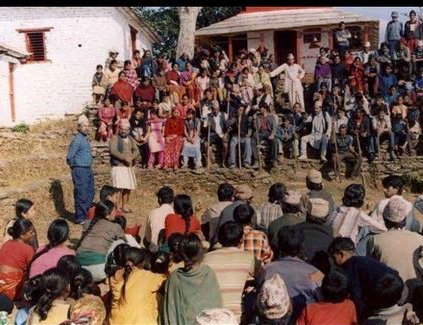 As it so happens, we are still waiting for a government and a prime minister to be announced! Some newspapers are joyfully covering the provincial assemblies, which is commendable. For too long the governance at the Centre has ignored country cousins. It is just this very ignorance that has led to some parts of the population having their thoughts and minds, and indeed their knowledge of what’s going on in the ROW( rest of the world) whereas in some places in the Far West parents still tell their children that if they eat food cooked by a Dalit their teeth will drop out!

It’s somewhat along the same lines as forbidding menstruating women to touch the pickle jar for fear they’ll become sour ( isn’t that what most pickles are supposed to be?)or the milk will curdle and so on and so forth.

If we are going forward, and that’s what the America-returned youth tells us, then it’s time to lead an assault on superstitions that put women on the back foot. There are so many it’s hard to choose where to attack first!

Of course, the ones that spring to mind most easily are the ones that involve superstitions about witchcraft and women involved in the same. As it so happens Nepal is not alone. Selections of other countries have such superstitions. These are not only African countries or Caribbean countries, although maybe they strike us as having beliefs more akin to our own, but a fair number of European countries have rural pockets that still harbour beliefs in witchcraft. No names no pack drill!

When I was an adolescent menstruation was still a taboo subject in Northern Europe. You didn’t talk about it! I do remember when the taboos began to crumble. In our case it was when we had a young sports’ mistress by the surname of Teet. She told us “ you can giggle all you want but it is my surname and I’m not ashamed of it!

It was under her guidance that the mysteries of our bodies began to be revealed. Some of them took some believing, but gradually it dawned on us that life and the beginnings of life were not such a mystery after all.  The pupil catchment area of our school covered huge swathes of pasture and farmland. It didn’t take long before we put two and two together from our biology books and the rabbit became humanised in  a couple of village women who had, according to many of our mothers, ‘far too many kids’.

Those were the days without scientific family planning and what could the women do up to that point but just pray or rely on witchcraft? Lots of whispers and conjectures about what witches did to rid you of an unwelcome bundle- a rather mean way of looking at an unborn foetus but accurate in all respects.

Romanies were common travellers in those days and we were taught to not engage with them. Rather a pity when you consider the centuries of knowledge they carried around in their heads! Only in the current era ,after a holocaust that killed not only millions of Jews but also almost as many Romanies, does the world acknowledge the injustice their people have suffered.

As it so happens, I rather miss them and the tales about their people. Now we can place them and their language it seems clear that they are probably the closest we can come to the early Sanskrit-speaking peoples and therefore we should be sufficiently ashamed of ourselves for shunning them for so long and sometimes subjecting their children to the vindictive behaviour of ours!

This I suppose is what happens when we are not quite far enough from the wonders of the lands to appreciate them and close enough to be afraid. See where the fear of nature has led us? It has led us to destroy its wonders to make ourselves safe!

Women are often at the forefront of the fear mongers: they fear mice and rats because of the so-called legless movement as one of these creatures moves and often go to many lengths to exterminate them, including fearsome looking iron traps that are reminiscent of the infamous iron maiden used in the Spanish Inquisition!*( the name of an iron mask with heavy nails inside, closed over the face of an offender as a slow painful punishment).

But as it so happens, they are better organised than we! As soon as one leader goes, another takes his/her place. Yes! I dare to dream that rats have fewer gender prejudices than the human race. It’s a far–thinking leap but one can dream can’t one?

It’s worth looking at all these superstitions and fears today when some rich, powerful people are probably exploring other planets, but why we might wonder? For me the answer is simple. Lazy and undisciplined as we are in comparison to the creatures that share this earth with us, who really do have to work and hustle for food to stay alive, especially as every day of human rapacity makes it so much harder for them to keep going, the long-term idea is probably to find a fresh place to inhabit once we’ve ruined this one. Right now , as it so happens, if you peruse newspapers, science journals and the trends in cinema  lately you can detect this human longing.

Unfortunately, our boffins haven’t quite found the right place. You know, one we can all sink into without too much hardship! We are really hoping for somewhere  we can take over without a struggle, leaving the griminess and deceitfulness of the world we live in behind. Back to nature-not really! What we are looking for is a way forward, a super nature kind of place where we can control everything with vibrations picked off the airwaves, so easy and clean. A place where we can strut around in cloaks of amber, bronze and dark green and blend in an unobtrusive way into the landscape that will offer everything we need without strange, untamed creatures as competitors. Looking forward at this dream of another world one wonders who is going to pick up the pieces here after we have smashed everything around us?

Well, as a final word in typical human speak, let me say:

“we don’t have to worry just yet, because, as it so happens, we are too primitive to deserve such a place and future. Until we rid ourselves of the taboos, superstitions and hatreds that pull us back and until we move forward together in unity, we’re not going anywhere as it so happens!