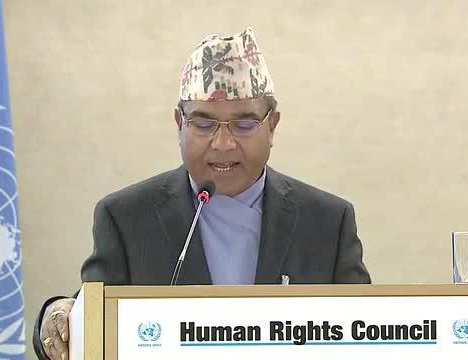 This year marks the 70th year of the adoption of the Universal Declaration of Human Rights (UDHR) and 25th year of the Vienna Declaration and Program of Action. Both these landmark events constantly remind us of the non-politicization and non-selectivity as all human rights are universal, indivisible, interrelated, interdependent and mutually reinforcing.  All human rights merit to be treated globally in a fair and equal manner on the same footing and with the same emphasis. Nepal firmly upholds these values as guiding light in its efforts to the protection and promotion of human rights.

For many developing countries like Nepal, the right to development bears a profound meaning. We firmly hold that democracy, development and respect for human rights are interdependent and mutually reinforcing. They must remain balanced and operational at national, regional and international levels. The rule of law must work at all levels.

As we celebrate the silver jubilee of the Vienna Declaration, its promise to realize the universal and inalienable right to development still remains unfulfilled.

Faithful implementation of the Agenda 2030 for Sustainable Development and other relevant internationally agreed development frameworks through enhanced partnership and collaboration is central to the protection of human rights everywhere.

The Human Rights Council has been playing an important role for the protection and promotion of human rights by all. The Universal Periodic Review mechanism has successfully evolved to become a hallmark of positive international cooperation in the realm of human rights.

We consider that the collaborative and constructive approach embraced by the UPR process should be further promoted. Such approach promotes transparency and fairness, in view of the fact that no single country has ever achieved perfections in human rights.

Nepal has remained constructively engaged with the UN Human Rights mechanisms. Two years ago, we had undergone second cycle of review under the UPR. Its recommendations are now being implemented in earnest under a well-defined action plan.

Nepal represents a unique case study of a successful peace process from an armed conflict into a democratic political transformation that began in 2006. At the heart of this entire process lies the aspiration and strong national commitment to ensure equal rights to all of our people.

Nepal’s commitment to the universal values of human rights is total. We are a party to all major international human rights instruments, including seven of the nine core human rights conventions. We have abolished death penalty and do not condone impunity.  Rule of law remains at the centre of our constitutional and legal process.

We have adopted federal system of governance to manage the diversity of Nepal. Through 2017, Nepal conducted a series of elections for local level, provincial assemblies and federal parliament. With successful conclusion of these elections and formation of Government in each tier of federal structure our constitution has come into full implementation. This is a significant milestone crossed in Nepal's journey to federal democratic order.

Besides ensuring the successful completion of the peace process and democratic transition, the elections have brought a transformative effect in the empowerment of women, indigenous people, Dalits, Madheshis, persons with disabilities, among others. They are now at the forefront of political and development process. Women now represent 33 per cent at the federal and provincial assemblies. At the local level the figure is much higher well beyond the constitutionally guaranteed 40 per cent.

Similarly, 45% of the public sector employment have been reserved for weaker section of our population. The policy of affirmative action has significantly enhanced access to education, health services, employment opportunities and political participation.

Nepal has introduced rights-based approach to development, and adheres to policy of zero-tolerance against gender-based violence.

Strengthening of national capacity remains our priority. The National Human Rights Commission and other independent constitutional commissions dedicated to women, Madheshi, Tharu, Muslim and indigenous people are being further consolidated.

The National Human Rights Commission of Nepal conforms to the Paris principles and has consistently been accredited with ‘A’ status.

We have vibrant media that play an important supportive role in promotion and protection of human rights wider and deeper in society.

Civil society organizations are recognized as partners in development, and many of them play the role of human rights defenders.

Nepal’s judiciary is independent and competent to uphold and safeguard human rights and fundamental freedoms. The Supreme Court has given landmark judgements, which have expanded scope of human rights jurisprudence and added dimensions in inclusive realization of human rights.

To fully address the issue of transitional justice, the Truth and Reconciliation Commission and the Commission of Investigation on Enforced Disappeared Persons are currently engaged in the country. Terms of the Commissions have recently been extended, for a second time, for completion of their mandates. This will allow the investigation and prosecution of all allegations of serious violations of human rights and humanitarian laws, and to ensure justice and accountability.

Nepal truly believes that together we can provide a strong voice to all those around the globe who look up to the Council to make a positive difference in their lives by upholding the mantle of human rights. For that the Council must be apolitical and objective and should examine human rights issues on merit basis in a spirit of openness and dialogue.

Shanker Das Bairagi is a foreign secretary of Nepal. Excerpts of his Statement delivered  at High-level Segment of the 37th Session of Human Rights Council as Head of Nepali delegation in Geneva.

Bairagi is a foreign secretary of Nepal