Nepal Is Committed Increasing The Participation Of Women In Peacekeeping

Nepal-UN Partnership Has Only Broadened, Strengthened, And Prospered 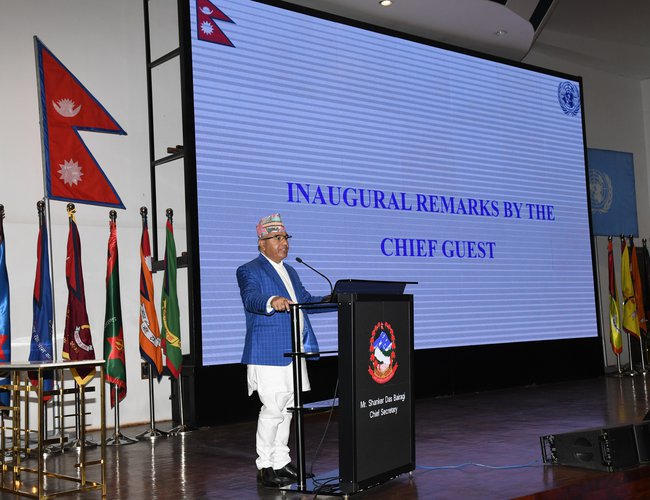 I thank the Nepali Army for organizing this seminar and for inviting me to speak on this important occasion of celebrating the United Nations Day.

In this context, the theme of today’s seminar “Nepal in support of lasting peace and security in the world,” is both timely and pertinent.

The United Nations has been one of the important development partners of Nepal ever since we joined the organization in 1955. Over the years, the Nepal-UN partnership has only broadened, strengthened, and prospered.

The United Nations and its Agencies have provided valuable support to Nepal in its development efforts, including in the implementation of internationally agreed development goals such as the MDGs and SDGs.

Such support will be more critical as we chart our post-pandemic pathways for a resilient economy, strive to achieve a socio-economic transformation, and prepare to graduate from the LDC category by 2026.

Nepal has been contributing to the maintenance of international peace and security through active contributions to the building of normative framework as well as through our substantive participation and contribution to the UN peacekeeping operations.

We have been deploying our peacekeepers without any caveat at the shortest of calls and even in the most challenging circumstances. Nepali blue helmets have earned their fame and repute as the most competent, professional, dedicated, and dependable peacekeepers anywhere.

I am pleased to highlight that Nepal is currently the second largest troops and police contributing country, with over 5500 peacekeepers on the ground in 12 different Missions. The Government of Nepal is committed to deploying up to 10,000 uniformed peacekeepers whenever United Nations requires them. We have endorsed the Declaration of Shared Commitments in support of the Action for Peacekeeping and A4P plus initiatives of the United Nations.

We remain committed to working together with the UN Secretariat and our partners to expand and strengthen our engagements in the future. We are equally committed to increasing the participation of women in peacekeeping and meeting the standard of the Gender Parity Strategy introduced by the Secretary-General.

The Government of Nepal continues to prioritize the capacity building of our peacekeepers and to ensure that Nepal’s contribution to UN peace operations is further enhanced.

Given the history and size of our continued and dedicated contributions to UN peacekeeping for over six decades, we believe that Nepal deserves more senior leadership positions in the peacekeeping architecture at the UN headquarters and in the field missions.

Nepal's contribution to UN peace operations is one of the flagship tools of our foreign policy. This has not only helped alleviate the suffering of conflict-affected people in the host countries but also promoted Nepal's image at the international stage.

However, this would not have been possible without the ultimate sacrifice of the brave heroes of Nepal. At this moment, I would like to express my deepest condolences to the bereaved families of those fallen peacekeepers - both military and civilian who lost their lives while fighting for the noble cause of peace and humanity.

From time to time, Nepal has taken up several leadership roles and contributed to steering the global raft of multilateralism. We have assumed important roles including as a member of the Security Council, Vice-President of the General Assembly, Chair of the Main Committees, as well as a member of the Human Rights Council, ECOSOC, Peacebuilding Commission, Governing Bodies of the Specialized Agencies, and Executive Boards of Funds and Programs.

We have always championed the cause of the countries in a special situation, often by taking up the leadership roles of the groups of LDCs and LLDCs.

Currently a member of the Human Rights Council, we continue to add value to the work of the Council through an apolitical, objective, and non-selective approach to human rights. As a staunch believer in multilateralism, we see the UN as the most legitimate international organization in marshaling global efforts to address the pressing challenges of today’s complex and interdependent world.

Having said this, however, I must state that the UN system of covenants and institutions built over the last 77 years is far from perfect. We must therefore continue our collective efforts towards making it a more competent, transparent, resourceful, credible, and relevant organization to meet the challenges of the 21st century.

We must make it capable to serve the interests of all and, in particular, those of the smaller and poorer countries. We must work continuously for leaving no one behind and for the sustainability of our planet to make a safer and more secure future for all.

I conclude by thanking all distinguished guests for joining in this special event. I wish all foreign guests a pleasant and productive stay in Nepal.

Shanker Das Bairagi is the chief secretary of the Nepal Government. Excerpts of the remarks by chief secretary Bariagi at the Event Organized by the Nepali Army to Mark the United Nations Day

China’s Rapid Transformation And Lessons To Learn By Krishna Silwal 12 hours, 28 minutes ago