Nepal is the 2nd poorest country in Asia, beaten only by war-torn Afghanistan, possesses a GDP per capita of just $837 and is regarded as a ‘least developed country’ by the UN 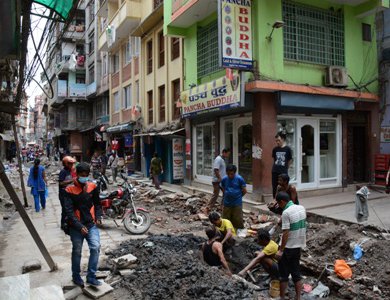 It’s my first time in Nepal and before coming I wasn’t sure what to expect. I knew I’d be treated to delightful delicacies, a rich culture and beautiful Himalayan views. What I wasn’t sure of was how much damage the 2015 earthquake had left, how much poverty is present or how Nepal compares to other developing nations in terms of progress. Nepal is the 2nd poorest country in Asia, beaten only by war-torn Afghanistan, possesses a GDP per capita of just $837 and is regarded as a ‘least developed country’ by the UN. Despite knowing these facts and figures, it was still hard to paint a picture of what would meet me in Nepal.

After landing in Kathmandu, I saw an immediate difference with my temporary home of Vietnam. Upon arrival at Hanoi’s Noi Bai Airport you are greeted with a facility like any other capital city’s. It’s clean, pristine and tricks you into thinking Vietnam will be just as developed as Europe or the US. However, Kathmandu’s Tribhuvan Airport feels like a frantic version of an old English railway station. With its red bricks and small size, I was half expecting to see a train bound for Leicester somewhere. This is a stark contrast to the aesthetic spotless white beams and looming glass walls that most international airports sport.  However, the uniqueness of Tribhuvan Airport didn’t finish there. The security was manic, filled with a baffling amount of TVs and was severely short-handed. Baggage collection was equally frenzied and lacked any real structure. No one in the raucous crowds seemed to know where to get their luggage from and neither did the few members of the airports staff.

As I travelled to my accommodation by taxi I surveyed the crumbled pavements, split roads and broken buildings. At first I struggled to tell if this fraught infrastructure was the product of the earthquake or just a telling sign of the poverty Nepal clearly faces. The charming streets of Lalitpur, the heaving bustle of Asan, and the history of Maru and Indra Chowk don’t lie though. Nepal is still hurt by the earthquake. Huge wooden beams hold walls in place as giant cracks scar temples, and rubble sits between homes. Whilst the poverty of Nepal is clear, it’s apparent that many of its current problems stem from the earthquake. Part of me expected to see a nasty fallout from the natural disaster but this hasn’t made it any less shocking to see.

In spite of all this, the real surprise Nepal has thrown me is its people. To have suffered such a tumultuous history and still be so warm and inviting is nothing short of admirable. The civil war that scarred the nation for a decade was followed by political instability, a devastating earthquake and a humanitarian crisis with the 2015 blockade. Having gone through all of this the Nepali people still radiate a genuine sense of caring. On board my flight a Nepalese lady insisted on buying me water since I had no currency on me; a man at the airport paid for my taxi as there was no working ATM; not to mention the fact the immigration officer actually laughed and joked around with me (the first time I’ve experienced anything other than grunts and tuts at an immigration desk). The kindness of everyone shines through with their chattiness and eagerness to help. This makes me wonder how people can be this great when they have faced such tribulations.

At first sight, Nepal is a country grappling with problems unparalleled by anywhere I’ve been before. Its issues with poverty are exacerbated by the aftermath of the earthquake and whilst progress is being made it seems slow and shows no sign of reaching pe-earthquake levels any time soon. In spite of this the people are upbeat, caring and grudgeless. I wasn’t sure what to expect from Nepal, and whilst the effects of the earthquake and poverty have been prominent, the biggest and nicest surprise has been its lovely inhabitants.

Communists And Insurgents: Nepal’s Past And Present
May 25, 2018
Ghandi & Associates’ Coveted Founder Speaks About His Past And Nepal’s Future
May 04, 2018
Nepal’s Top Lawyer Decries Corruption And Nepotism’s Effects On Investment
May 04, 2018
Mohan Shumsher – the Rana’s saviour
Apr 21, 2018
“Chandra Shumsher’s Accomplishments Are Iconic”
Apr 21, 2018

India Sees Itself As Nepal’s Natural And Instinctive Responder In Times Of Crisis. By Harsh Vardhan Shringla 1 day, 16 hours ago

Human Rights Dimension To COVID-19 Response And Its Long-Term Effects By Novela Acharya 2 days, 9 hours ago

Nepal In The New Strategic Ambiance By Binoj Basnyat 5 days, 4 hours ago

‘Anything Goes’ First By Hemang Dixit 1 week, 1 day ago

How Can The Problems Of Koshi Region Be Addressed Through A Nexus Perspective? By Pratik Poudel 1 week, 1 day ago