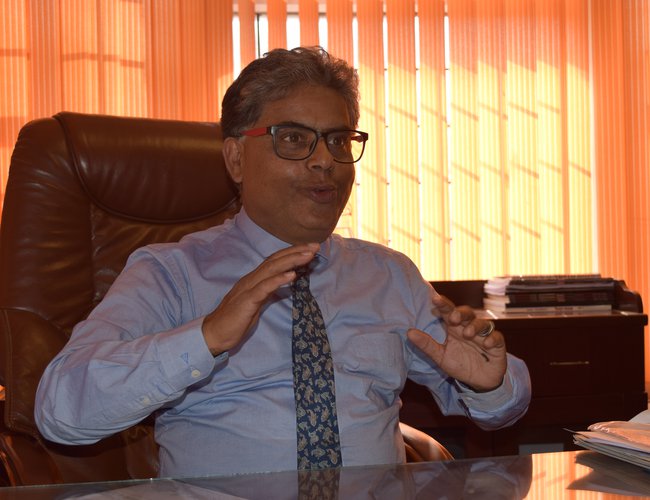 When did you know that you wanted to be a lawyer?

It’s not that I wanted to be a lawyer, it’s that I would always argue with my friends and teachers in school. In light of this, I was advised to become a lawyer whilst in High School. My father was a judge and wanted this too but I had other ideas.

His phone rings. He apologises, answers, then bursts out two short sentences before hanging up.

Your ability to join the law school is what made you want to be a lawyer?

Well at first my motive was to be a judge. I took a judicial exam in 1979 but couldn’t make it. I returned to my law firm and applied to become a teacher of law in 1981, with which I was successful. The beauty of teaching was that I could run my own office at the same time, and within a few years I’d become very popular in the market. I was part of the Bar Association and was heavily working with the Unions.

At that time the US government had a programme where they wanted one lawyer from the Nepali Bar Association to study state-side for a few months.

The Association recommended five candidates to the US embassy and from these they selected me. This opportunity allowed me to go to Madison, Wisconsin for three months training before returning to Nepal.

How did this benefit you?

Well, on my way home I decided to drop into New York City to see some friends I had studying there. I asked one of them to take me to Colombia Law as I was interested in seeing the place with its libraries and prestigious facilities.

Whilst there we bumped into my friend’s law professor. He asked me all about why I was in America and not Nepal, and I told him of my achievements. “Why don’t you want to study in Colombia?” He replied.

“What person wouldn’t want to study in Colombia? I don’t have the money,” I said.

“Don’t worry about that. I’ll give you fifty per cent off if you can get the rest. What do you think about that?” I thought ‘oh my god, yes’ but when I returned to Nepal the country was going through great revolutionary change with the monarchy. I was confused about whether to go back or not. If I went to the US I could miss a good opportunity here.

Yes, I was very politically active and an activist.

I knew that I would have the money to go if I sold all my things but still wasn’t sure what to do. I decided to seek the advice of the Nepali Congress party leaders to see if they could help me make a decision. Most of them told me that I couldn’t miss this opportunity but Koirala had other ideas. He argued that Nepal needed people like me “in a time like this.” I really didn’t know what to do. I was so confused.

I decided to consult my wife and was successfully persuaded to go - that was the best decision of my life. In America I made connections that aided my career here, as well my children’s. It was because of the links I made there that could get my sons internships at firms in Europe.

When you first went to America, what were the most striking differences between their legal system and Nepal’s?

The lawyers there were educated, articulate, and fiercely competitive. The judges were non-corrupt, academic and had etiquette.

The system was strong and robust. Everything, and everyone, was apolitical and commanding.

Nepal is the opposite. Judges here have no legal exposure and do not welcome newcomers nor the well educated. This results in a system where unqualified people are in charge of the laws.

Would you describe it as an “old boys club”?

If someone comes to Nepal with a billion dollars of investment, they’ll be putt off by the judges.

I worked with ADB to help draft laws for investment to rectify this issue, which was positive. It’s good to have good policies but it has no impact if the law is not known, not interpreted well, nor implemented. Lawyers and judges need to be trained for this and at the time there was nothing to facilitate this. So, how do you do that?

I suggested they have a training institute and became an adviser on their $4million project. I worked as a domestic consultant for them for four years, training attorneys and private bar candidates.

Tell me about your own law firm.

Whilst my two boys were studying in the UK, we had about six lawyers in my office. By the time they came back we were having to expand to our current four-floor building so as to accommodate our forty-member law team.

So that’s forty members of staff?

No, forty lawyers. This makes us the largest firm in the country. Our competitors only have ten to twelve, maximum. We’re still building more, and handle investment issues, legal mantras…anything really.

How have you applied the things you learnt in the west?

Well, first thing’s first, we needed an office and secretaries. Believe it or not, this was a new idea for Nepal as lawyers had previously been handling their own clerical work.

Next, I went about hiring interns for our own mutual benefit. I was the first to use computers and the internet too, which helped us with contracts, cases, filing, etc. etc. We added items to our office to build confidence with our clients. Small things, like a dialling system, appointment taking and a cafeteria – they all go a long way towards building a convincing product.

Do you think all of this has helped you with foreign investors?

Absolutely. The first thing that foreign investors want to know is whether a firm can understand their needs. We need to be punctual and professional to accommodate this. When they come to my office they can feel comfortable, as if they’re in an international firm. They need to feel assured that their presence in Nepal won’t mean losing quality with lawyers.

How have you seen foreign investment change over time?

It’s had many ups and downs.

In 1990, new economic policies were implemented, which brought privatisation and a wave of investment. Sadly, this changed after 1997 as the political situation deteriorated. Investment stopped coming in and the government couldn’t enforce policies effectively. Things have stabilised now but these days corruption is the issue. People contact politicians and judges to have cases swing in their favour. There’s dirty deals and money cut, and this is a real problem for Nepal.

And this scares away potential foreign investors?

Yes, very much. There’s no transparency and politicians are greedy.

Imagine you’re eating in a restaurant. You’ve just started your meal, the food is so tasty, you don’t want to stop but you’re full. You can’t eat anymore!

Being an investor here isn’t easy. It’s like being lured into a room with the promise of food only to find out you’ve been trapped. The door’s locked and there’s no food inside. You don’t want to stay but you can’t leave! The laws change here, the system is corrupt and clients get upset.

The Chinese are the smartest businessmen in the world. They can operate in Pakistan and Africa – even the moon – but they know that Nepal is impossible. One of the biggest hydropower companies in China decided to try a project in Nepal just to see how difficult it would be. Money was no issue for them – it was just a test. It should have taken five years but ended up taking ten because of problems with policy,corruption and instability.

Politicians can’t do everything by themselves. What was Obama’s biggest challenge when he became president? Building a team of people with knowledge, expertise and the capability to deliver.

It’s the exact same here with our politicians. They need to find the best people to help with policy – technocrats, lawyers etc.

The problem is that politicians need allies to get elected and when they enter office they give positions to these people. This kind of system works in a really bad way and means people like myself don’t get used appropriately. It’s akin to a party politician being used as a doctor. You don’t need someone who’s got a degree practicing medicine, you need someone with experience in hospitals with patients! It’s nepotism.

How does this nepotism effect the legal framework?

There’s no accountability in the system and cases become obsolete. Policies become convoluted and a political bubble appears.

This must make your job a nightmare.

Nepal's Stand Is For Truth To Prevail, Come What May: DPM Pokhrel By NEW SPOTLIGHT ONLINE 1 month ago

With Focus On Children, WVIN Has Done Well: Ginting By A Correspondent 3 months, 3 weeks ago