Pashupati Rana Narrates His Coveted Family History to Alex Bushnell at his residence. 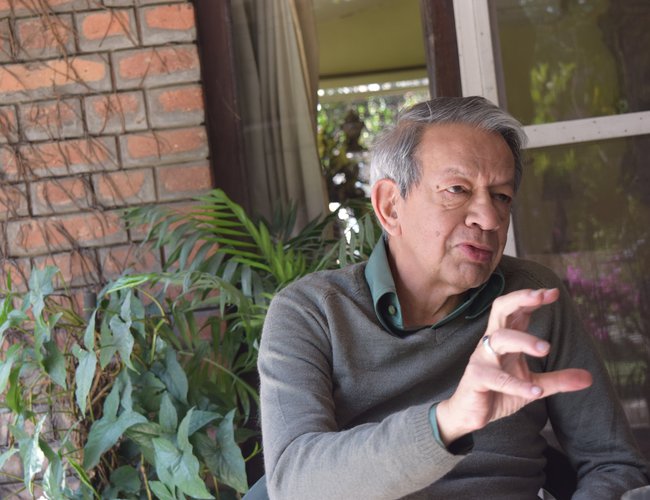 What would you say the greatest achievement of your grandfather (the last ruling Rana) was?

The peaceful transferral of power. His brothers were ready to fight a battle to the death. This was such a prevalent idea that my sister and I were evacuated from the country.

How did he achieve this?

It was complex. He ensured that he could rule in an interim period as the commoners had no experience with running a country. He also had to temperate his brothers.

Did this cause much family friction?

Well, his oldest brother became a minister in the new regime, so I think that helped.

What are some of the greatest achievements in your family’s history?

Chandra Shumsher’s accomplishments are iconic. He abolished slavery and was responsible for the 1923 Nepal-British treaty. This was the first time the country was recognized as a sovereign state and ally of the Empire.

Was Britain’s departure from India a bad thing for Nepal?

It was a bad thing for the Ranas.  He chuckles.

What about your father?

He was my grandfather's right-hand man. He was head of the foreign department as well as being a confidant of the King. Following the fall of the regime, he was the ambassador for India and secured Nepal’s independence in the face of the ever-growing dominion. Following from this he did most of the groundwork for the 1950 Indo-Nepal treaty, the basis for all our relations with our neighbor. Prime Minister Koirala also trusted him greatly. He placed him in charge of banking and industry during his ‘industrialisation’ programme for Nepal. He was an incredibly influential man.

What about his older brother, your uncle?

He was Home Minister.

And yourself? How have you been involved in politics?

I lived in the UK for 10 years and received a PHD from Oxford. I returned to Nepal to become a journalist despite speaking very little Nepali. My political ideology was very much shaped by my time in England but my main focus was to do things for Nepal. I was head of economic development and reversed the brain drain before becoming part of the Gurung Legislature. I also held a number of ministerial positions throughout my career.

What were your major achievements?

My main achievements were in education. I took a serious leadership of that administration and brought new schools into the system. I would not allow inefficiency or corruption and made people frightened of me.

What was your role in the 1990 transferral of power?

I was foreign, finance, communication, and water resources minister at the time. All four. I was given principle charge of negotiations with the left by the King. I stopped him from negotiating with the communists and oversaw the overall transferral of power.

What were your achievements after this?

I negotiated the Mahakali Treaty with India in 1996. This was the framework for all hydropower agreements in the future and was incredibly important. It was more or less fully negotiated by me.

How long did you stay in government until?

I left in 1996 but remained chairman of the Rastriya Prajatantra Party. I maintained my seat until 2008 and still maintain a large base.

What’s your own and your family’s future in politics?

Communists And Insurgents: Nepal’s Past And Present
May 25, 2018
Ghandi & Associates’ Coveted Founder Speaks About His Past And Nepal’s Future
May 04, 2018
Nepal’s Top Lawyer Decries Corruption And Nepotism’s Effects On Investment
May 04, 2018
Mohan Shumsher – the Rana’s saviour
Apr 21, 2018
Art’s Battle In Kathmandu
Apr 07, 2018

US Democracy Is In Danger: Philosopher Susan Neiman By Agencies 2 weeks, 2 days ago

The Fourteenth General Convention: An Aspiration Of NC’s Reawakening By Arjun Narasingha KC 2 months, 1 week ago

Nepal's Stand Is For Truth To Prevail, Come What May: DPM Pokhrel By NEW SPOTLIGHT ONLINE 6 months ago

Nepal Is Ready To Face With India, Ultimately Truth Shall Prevail: DPM Pokharel By NEW SPOTLIGHT ONLINE 6 months, 2 weeks ago

How Can An Employer Pay Full Salary To Employees Without Income? Senior Advocate Dr. Gandhi Pandit By NEW SPOTLIGHT ONLINE 6 months, 3 weeks ago