Communists And Insurgents: Nepal’s Past And Present 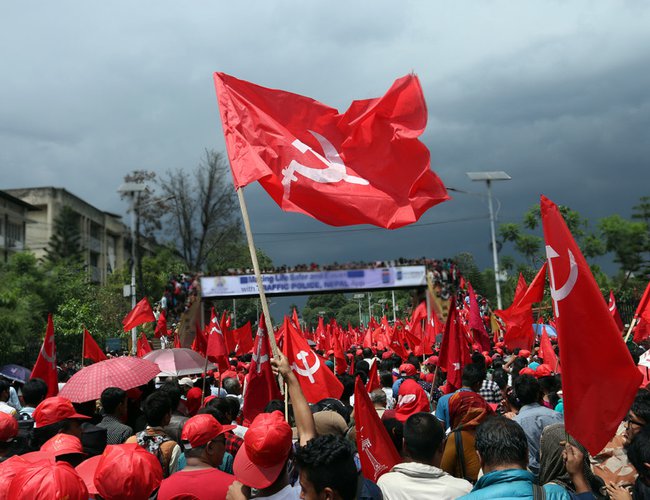 For over half a century Nepal has had significant radical communist movements that have shaped its political and cultural landscape. Twelve years since the end of the civil war, this period of instability and insurgency seems to finally be coming to a close. However, with some authoritarian actions from Oli and the government, we could see a resurgence.

Since the inclusion of the Communist Party of Nepal (Unified Marxist – Leninist) (UML) in mainstream politics in the 1990s, the radical left has had a far more bloody involvement in Nepal’s history. The UML believed in the political process (UML) whilst some communists believed armed resistance was necessary to achieve the left’s goals. This group of radicals were the Communist Party of Nepal – Maoist (CPN(M)).

Eleven years after the decade long “people’s war”, the CPN(M) formed a left-wing alliance with the UML. The elections for the House of Representatives saw the left alliance win 47% of the vote and nearly two-thirds of the seats – a huge achievement. Moving forwards, they announced their seven-point agreement last month, including their plans to merge and become the Nepal Communist Party.

Whilst the CPN(M)’s transformation over the last decade is promising for peace, it bears a striking resemblance to the situation with the UML in the 1990s. When the UML joined the political process they isolated their radical wing, which led to the formation of the CPN(M). Today, the CPN(M) have joined the political process, so what’s happened to radicals within their ranks? Have they toed that party line or do revolutionaries still roam Nepal?

Splinters have happened, with the most obvious example being the Communist Party of Nepal Revolutionary Maoist (CPN-M), led by Mohan Baidya. This group believes that the CPN(M) has lost its way and is no longer fulfilling the ambitions of the people’s war, which can only be brought about by an armed struggle. Again, this is a mirror image of the split between the UML and the CPN(M) in the 1990s. However, the CPN-M has failed to have any major impact and in 2014 split again when Netra Bikram Chand broke off to form a new party.

Unlike Baidya’s faction, this new splinter group has taken up arms against the state. Nepal Monitor reported as many as one-hundred and twenty-eight cases of violence during the 2017 elections, with as many as ninety-six of these potentially being perpetrated by Chand’s group. These violent acts mostly included IEDs (improvised explosive devices) aimed at polling stations, candidates and campaign events. In addition to this, Chand’s group intimidated voters in the Thawang Rural Municipality in Rolpa so greatly that the turnout was just 30%, the report suggests. This subsequently questions the legitimacy of such a vote – their ultimate aim.

By Nepal still struggling with poverty and corruption, one wonders if radical groups like Chand’s could still gain mass appeal.

Aditya Adhikari, author of The Bullet and the Ballot Box and an expert in Nepali Maoism, doesn’t view Chand’s organisation as any kind of real threat to the political process though. He claims that Chand has no real platform or base support and only appeals to “pissed of Maoist fighters” who view the CPN(M) as abandoning their cause. The reality is that armed resistance to the state seems unlikely to return, he claims.

People in Nepal are tired of conflict after the ten-year war and have little desire to return to those times. This is in addition to the fact that whilst the CPN(M) might have isolated some of its fighters and followers, it still maintains broad support in its heartlands as shown through the spread of votes in 2017.

He acknowledges that support for insurgency could return but the conditions for this are unlikely. Adhikari claims, the state would need to persecute ethnic minorities, and the insurgents would then need to help said minorities, or Nepal would have to return to a dictatorship.

Until either of these things happen, the revolutionary Maoists that still exist stand very little chance of gathering any real public support for their cause, he says.

Recent developments with Chief Justice Parajuli do not bode well for the government’s commitment to democracy though. According to the 2015 Constitution, a chief justice may only be removed through impeachment by the House of Representatives. The Judicial Council tendered his resignation last week upon finding out that he’s of retirement age.

In fact, there are reports that Prime Minister Oli stated that if Parajuli didn’t resign, or wasn’t forced to leave, he would fire him himself.

He says that whether you agree or not with Parajuli’s departure, his resignation should have been put to the House of Representatives

“There is a danger that this two-thirds majority will go to Oli’s head … [but] it’s too early to say”.

Oli has already shown totalitarian tendencies by bringing the national investigation department (NID) directly under his control. This agency is the principal collector of information on public security, economic crimes, corruption and domestic and foreign terrorism. Usually the NID answers to the house committees but now Oli has unfettered access to this information and the whole process has become far less transparent.

There are few checks and balances within the Nepali system and Rana acknowledges that if Oli chooses to act autocratically then there is very little that can stop him.

These aren’t the only instances of undemocratic actions within the government. During the decade long conflict over seventeen-thousand people were killed and thousands more went missing. Since the fighting ended there has been a push for bringing the perpetrators of such war crimes to justice. Abductions, executions and sexual violence occurred from both sides during the insurgency but as of yet no one is being held accountable. To inflict further pain, the CPN(M) and Oli’s UML signed a deal last year to give people accused of such crimes amnesty. Amnesty International and the International Commission of Jurists have accused the two parties of trying to “wash away the crimes of conflict”.

In addition to this, Nepal is ranked 122nd in the world for corruption, and there was widespread censorship and arresting of journalists covering the election last year.

This being said, Nepal has moved up eight places in the most recent EIU Democracy index from the 102nd to 94th most democratic country in the world. Nepal is currently regarded as a “hybrid regime”. It’s not a “flawed democracy” such as the likes of India or Malaysia but instead finds itself in a list of countries including Iraq and Pakistan which are recovering from authoritarian regimes too. This improvement could also help explain the appetite for people engaging with the democratic process instead of armed rebellion.

Another factor in people’s willingness to cooperate with democracy is the hope that the Left-wing alliance can aid social mobility and alleviate the struggles of Nepal’s working class. Their manifesto is very clear in this aim but it’s too soon to know if they’re going to be able to do it. Baidya and co. believe the “people’s war” has been a conflict that has served to help the leaders of the CPN(M) and solidify the status quo the insurgents believed they were fighting.  He further says that if people come under the control of a ruling class, and the left alliance fails to deliver, then another people’s war is not off the table. Adhikari and Rana see this as unlikely in the short-run, but Baidya could be right. People’s willingness to buy into a system that disenfranchises them might last whilst the memories of war are fresh, but this can’t last forever.

Whilst the new left-wing government could push forward with democratic norms, we are left to question the likelihood of this. Nepal’s dogged history of authoritarian regimes, the assiduous abuses of democracy, and the persistent presence of mass poverty means a question mark hangs over this new era of politics. If the Government can continue taking Nepal down a path of democracy, the country’s prolonged relationship with communist insurgencies could well be over. However, if they choose to go down a darker path, Nepal’s insurgency era may yet see more days.