Despite all efforts, political parties are yet to unite with a cause 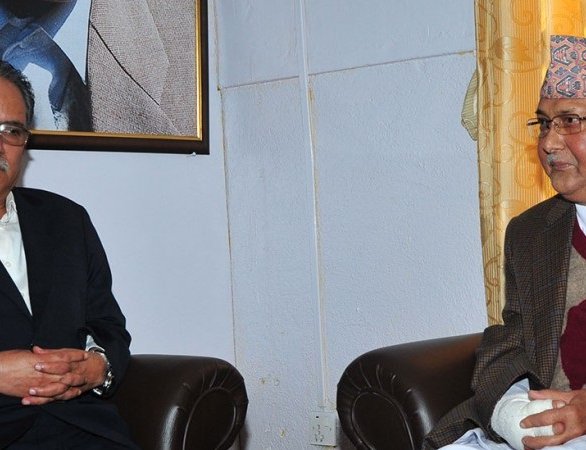 As Maoist Center leader Pushpa Kamal Dahal Prachanda has announced that his party and CPN-UML will unite on April 22, a group of top leaders in Maoist Center have cautioned about the unity, given the high handedness of CPN-UML leaders.

In his recent tweet, Dr. Baburam Bhattarai, former prime minister and former close colleague of Prachanda, warned Dahal that his colleagues will dump him in case Maoist merges without guaranteeing their future. Bhattaraiwrites:"All party leaders will follow you as rats did toPied Piper of Hamelin."

Former Prime Minister Dr. Bhattarai’s expression is understandable given the wide differences within Maoist Center over the modality of unification. Maoist Center leaders are demanding 40:60 ratio of representation in unification.

However, CPN-UML leaders are pursuing 30:70. Due to these differences, the party unification deadline has already been postponed for several times in the last one month. Maoist Center leaders know that they will lose their entire identity after unification if they do not get a proper strength in the party unity.

Having already faced split in the past, CPN-UML leaders are aware that any deal giving 40 percent to Maoists in unification will leave the possibility of split in case of any differences.

At a time when speculation is rife that the unification between the ruling CPN-UML and CPN (Maoist Center) could be delayed by a few weeks due to growing differences between the two parties, CPN Maoist (Center) Chair Prachanda has said that the two parties will be formally united on April 22, the date set by the merger coordination committee for the announcement of the party unification.

“All the preparations required for the party unification have been completed. As the review of the interim statue of the to-be-united party took some time, we had to postpone the unification date to April 22. The two ruling parties will be united on the set date,” Prachanda said. The scheduled date of April 22 for the unification of the two parties coincides with Lenin's birth anniversary.

CPN (Maoist Center) had said that the planned unification between their party and the CPN-UML could be delayed by a few weeks, or even a few months, due to widening distrust between the two sides. They said the UML's upper hand in crucial decisions relating to governance and power-sharing was the main reason behind the change in the Maoists' stance.

However, Prachanda said that since it is the wish of the general public to see the two parties united to emerge as a powerful political force, there was no option of backtracking from the unification. "The unification is a historical opportunity for communist parties of the country to be one and lead the country towards prosperity. So, we just have to take the unification process to a logical end,” he said.

At a time when Maoist leader Prachanda is stressing unification, CPN-UML leaders are yet to come up with concrete decision on the modality of unification. Even Prime Minister K.P. Sharma Oli did not speak any word regarding unification during his address from Rara Tourism Festival.

Backed by Krishna Prasad Sitaula and Dr.Shekhar Koirala, Singh has been demanding the change of guard which Prime Minister Deubahas rejected outright. Given the current situation, one cannot rule out the possibility of some kind of split in the NC.

Although Nepal’s politics has gone through several ups and downs and upheavals, political stability seems to be a long way to go.