Federalism is currently running into practical and theoretical difficulties: the former could have been ameliorated if the party foot soldiers and hangers-on in CA1 and CA2 had been serious about their duties in the decade they spent in parliament. 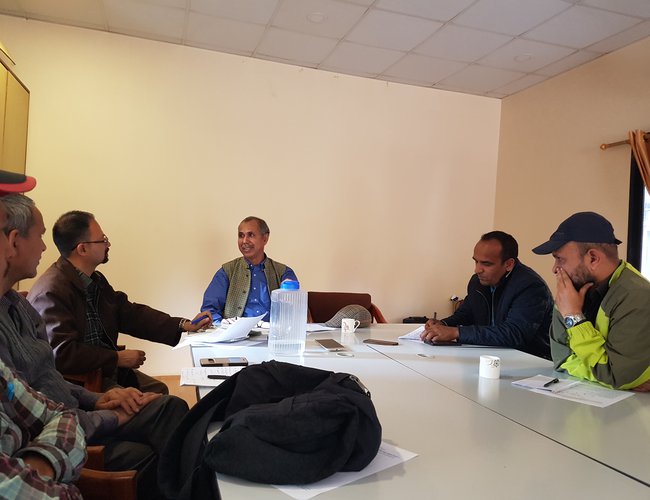 All three freshly imported pillars of New Nepal – republicanism, secularism and federalism – rest on unstable (one might even say dubious) foundations, and none more obviously than federalism. On Friday the 13th, as auspicious a day as any, Nepal Philosophy Study Center, a club of young Nepali lovers of abstract reflections, held an interaction program at the Martin Chautari hall on the philosophical foundations of federalism. The presiding Pundit was Shyam Shrestha, the founder-editor of the late Mulyankan magazine, a monthly that was compared in reputation within Nepal to EPW of Bombay under Krishna Raj. The magazine thrived under the multiparty dispensation of the constitutional monarchy but went downhill and folded with Loktantra. Shyamji, however, went on to become a Maoist nominee to the Constituent Assembly.

In his presentation, he argued that there is no philosophy as such of federalism but that there are some underlying principles which essentially consist of separation of state power into at least two political bodies. Assumed also is that federalism has built-in provisions against power centralization as well as more say at the high table for hitherto marginalized voices. While the experience of different countries that practice federalism is widely varying and determined by their historical experiences, most such as the German, Russian, American ones have come together as a bulwark against some external threat. (Incidentally, even the EU was a coming together of WWII shattered Western Europeans to set up a coal and steel closed market against American and Japanese production.) Nepal, however, has embarked on this journey to manage internal dissent. Kangress and the EhMaLays (more vociferously the Oli faction) ridiculed federalism when it was propounded by the Maoists. The radical Maoists, in turn, had already given up on it by the time the CA came into being, even though they had used it opportunistically during their insurgency as a recruiting tool, ironically by giving up their class-based philosophy for caste and ethnicity identity politics. These are the worthies in whose hands a fatigued nation has now left the task of implementing federalism.

Federalism is currently running into practical and theoretical difficulties: the former could have been ameliorated if the party foot soldiers and hangers-on in CA1 and CA2 had been serious about their duties in the decade they spent in parliament. Not that they had not spent the money, though: through donor largesse as well as Nepal’s taxpayer budget it is estimated that the billions spent on “state restructuring” exercises and junkets would have been enough to double Nepal’s power generating capacity by an additional 1000MW! Indeed, it was remarked at the philosophy forum’s meet that had the last Aishwarya phase of the Panchayat honestly implemented the decentralization act, or the Kangress and EhMaLeys followed up on it during their early multi-party rule, federalism would never have been the issue it did now or during the insurgency.

The current constitution, and its nominated “inclusive” representatives, has in reality centralized more power. It makes local governance entities such as the gaonpalikas and nagarpalikas directly answerable to the center, not the provinces. Conversely, the lower units get most of their budge from the center. Even more ludicrous have become the proportional nominees to the parliament under the inclusive quota: they are hardly answerable in any sense to their ethnic base since they are but flunkies of particular bossesof party factions.An example cited is Sarita Giri, the articulate leader of the Madhesh-based Sadbhawana Party, who has been nominated on the Khas-Arya quota. How she will be articulating or even representing the interests of the Hill Brahmins and Chhetris will certainly be enthralling political acrobatics worth a front seat!

The current structure of local governance with their unbearably high running expenses and duplication of functions is already showing signs that it will not lead to increased development expenditure at the grassroots. Rather it could well lead the country towards bankruptcy, something we have to wait to see with the proposed budget a few months hence. An even more disturbing realization to emerge has been the reduction of the number of village governance bodies from some four thousand to just seven hundred odd units by clubbing together former VDC and making them wards of new gaonpalikas. In the hills, it has made local government even more inaccessible to the citizens: not only has it taken the village office further away – and in the hills it means an extra day or two of walking – but it has also shrunk representation from over two hundred local volunteer and politicians in former VDCs to now just a handful in clubbed-together VDCs renamedgaonpalikas.

Justifying the theoretical basis of Nepali federalism is even more problematic. The two elected CAs of the last decade were derelict on this count, exhibiting instant opportunism rather than long-term statesmanship with consequences that will haunt Nepali polity well into the distant future. It is now obvious that parties had realized ethnic federalism – the main plank of the Maoists during the insurgency – was not going to go anywhere in a Nepal highly fractured by ethnicity and language (124 and 103 respectively) with everyone a minority. It would have died a natural death had it not been revived by the anti-Maoist Madhesh uprising of January 2007, and the opportunism of visionless Girija Koirala who rode roughshod over colleagues urging caution on this front.

What the political leaders of Loktantra failed to do in their lucrative decade in CA1 and CA2 is to question the very slogan of the Madhesh uprising which was “One Madhesh One Pradesh!” In the Tarai live not just those that call themselves Madhesis who are confined to what is now Province 2 between the Bagmati and the Kosi: ALL the 124 ethnic and 103 linguistic groups live there (as they do in the Hills), making Madheshis a minority in the Tarai like everyone else. If such a diverse region can be One Pradesh, why not One Hill One Pradesh, indeed why not one “One Nepal One Pradesh!”? The crippling contradiction of Akhandabad (unitary-ism) in the Tarai but Bikhandanbad (fracturing-ism) in the Hills was never addressed by our derelict and failed politicians of Loktantra with paralyzing consequences we face today.

Indeed, three factors militate against the very idea of province-based federalism envisaged by the 2015 constitution. First, the current dispensation – and the implementation of the current constitution – is in the hands of parties that call themselves communists of various stripes. Where in the world has a communist party been a force for political decentralization? It is just not in their genes. Second, Nepal’s bureaucracy is a past master in centralizing power: recall the refusal of district irrigation engineers to serve in the erstwhile DDC and creating new entities to bypass the decentralization act; of electricity department employees refusing to be transferred to the newly created NEA and creating a parallel DoED and effectively castrating the former; or the current refusal of civil servants to serve in the provinces and lower units. Third, as actually encoded in the fine print of the constitution, it is in the interest of national and village politicians to deal directly with central and grassroots entities respectively, and not to have to go through an unnecessary filtering layer called province (referred to privately asghaando in Nepali political discussion even by senior figures of parties that have to implement it).

If there had been any student of Nepali history in the constitution drafting process, they would have recalled the history of the Anchal(Zonal) Panchayat, which soon after the promulgation of the Panchayat system was seen to be a wholly unnecessary layer and today lives only in number plates of cars and names of football clubs. Indeed, it is said that myopic and opportunistic neo-feudal leaders of Loktantrick parties saw this as a means of clinging on to top party hierarchy positions, not making way for their younger, second-rankparty leaders but managing their rising political aspirations by hiving them off to these undefined bodies. If one looks at the province and municipal leaders we now have, these younger politicians seem far more competent, and less venial, than their party honchos, despite the fact that many others who were elected are not politicians but contractors and businessmen. Their frustrations in the days ahead are worth watching closely.

Federalism was propagandized as THE CURE for all Nepali woes; and that has made the current crop of Loktantricksters prisoners of their own hype, paralyzed and unable to take any new initiative to solve the imbroglio. If they had realized that the centralized Austro-Hungarian empire’s army spoke ten languages, that Ottoman empire (which is still unravelling since the end of the 1st World War) was more inclusive than any of its successor states, and that Pakistanis felt more “included” in their new state after the military takeover by Ayub Khan (because the “democratic” post-Independence Pakistan was ruled from Karachi by Urdu-speakers from Delhi and Lucknow, while the Pakistan Army had in it someone from almost every village of Punjab, Frontier, Baluchistan and Sind) – if they had reflected on all this, they would have realized that One Nepal One Flower-Garden Nationalism of Prithvi Narayan Shah where every ethnic group was to maintain their own kul dharma would have been – and still is – the best historically proven option for Nepal and its geo-strategic stability.