Our democracy is caught between nationalism and federalism. On the other hand, populism and nationalism threaten democracy. Our representative democracy no longer represents the people. In reality, democracy in Nepal does not exist, neither as a value, nor as a spirit, or as a social necessity. 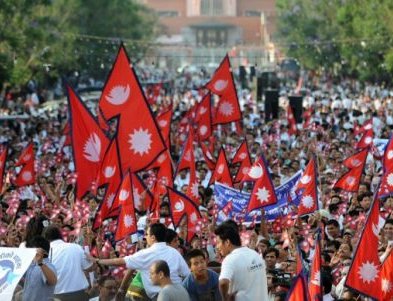 Everything that is directed against that system will be unjust, create terror, destabilizing, revolutionary, detestable and undemocratic.The parties that represent 55% of the voters will continually give legitimacy to the system because, winners or losers, they all take out a succulent piece of the pie of power.

It has a deficiency that would be caused by the lack of sufficient receptivity on the part of the representatives. There is a need to reinforce the line of communication between citizens and their representatives, as this communication is an essential pillar of democracy. Nationalism and the democratic system are two different realities. One is based on the passionate defense of one's own and the other on the rational negotiation of differences.

It is very difficult for nationalism to understand the relationship between democracy and the constitution since it considers that the Fundamental Rule can do nothing when it comes to containing the will of the nation unequivocally expressed by any procedures that may take place.

Undoubtedly, democracy is the best model of political organization humanity has found. However, as it was introduced within the context of capitalist productive relations, it lives in permanent crisis. By their own internal logic, such relations produce social inequalities and exclusions that corrode the very idea of democracy. If participatory democracy gains ground, the institutions of representative government could lose part of their power in favor of the new participatory sphere.

Based on a reflection on the limitations faced by democracy in the context of current globalization, we have to analyze the possibilities of a new relationship between people, collectives and state institutions. This serious evil affects not only the democracy in our country but also many other latitudes, where the possibility to recycle the groups and interests of society could be sacrificed. This possibility is the basis of democracy itself.

The question of the viability of democracy becomes very complex when the structures of power and domination cannot be given the minimum example of probity, good sense and balance in decisions. This puts the long-term objectives before the conjuncture. These objectives allow building a fair society, with development options for citizens.

Do we have a healthier democracy in Nepal because its citizens are ready to mobilize for what they believe is right? Or is it because of their concerns and interests? Or is politics on the street a signal ofeverything that does not work well?

It has not become a government of the people and for the people, but a tool by which power dominates the people. It can be said that democratic institutions, such as elections, serve as a mechanism to ensure the persistence of the authoritarian system and the effectiveness of its action on society. In principle, the separation of power between the judiciary (the court), the legislature (parliament), and the administration (government) is a fundamental principle of democracy.

In Nepal, we hardly see athe separation between these three powers. People live in poverty and enormous oppression. Journalists and politicians talk about democracy. The true form of government is, of course, completely oligarchic. The most basic physical problem of democracy is that no one is ever responsible. Voters make their choice but their choice is limited in advance. Their choices remain secret and they will not face the consequences of their choice alone. A voter travels in wagons to vote and everyone blames each other for the outcome. It encourages corrupt voting behavior by destroying accountability. The cost of any measure is shared by society as a whole, which encourages the more wealthy to vote for the absurd costs that can be transferred to others. The other burden will only become heavier.

No matter what people vote for, how smart they are, or whether they are good humans or not, they will eventually become accustomed to ineffectiveness and consider life as a gamble rather than a meaningful achievement of the goals. They give up the information and rely on opinions, and then exclude all competing views. Because honesty is a bad investment, they become passive-aggressive manipulators, which tell us about corruption and fish voters with guilt, sense of humor, shame, pity, and fear.

Our representative democracy no longer represents the people. We are facing a serious problem when it comes to leadership. Personalities play an important role in every aspect of our lives. It is more than obvious that there is a lack of strong personality in politics. A strong personality is required to develop strong and diverse political leaders.

Freedom and democracy cannot be an ideological duty. In reality, democracy in Nepal does not exist as a value, or a spirit, and neither as a social necessity.

PM Deuba Wins Vote Of Confidence In HoR By Agencies 1 week, 4 days ago

UML POLITICS Divided We Stand By A Correspondent 1 week, 5 days ago

MPs Have No Choice Other Than To Vote Deuba By Keshab Poudel 1 week, 6 days ago