Adaptation In The Bonn Session 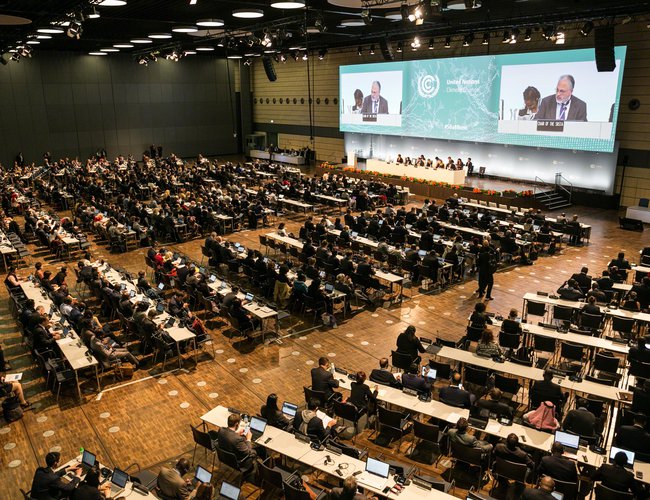 Over 3400 participants from 183 Parties to the UN Framework Convention on Climate Change (UNFCCC), Kyoto Protocol (KP) and the Paris Agreement (PA), including participants from UN and agencies, inter-governmental and non-governmental organizations, and media attended the 48th session of the Subsidiary Body for Implementation (SBI) and Subsidiary Body for Scientific and Technological Advice (SBSTA) and the 5th session of the first meeting of the Ad Hoc Working Group on PA (APA 1-5) from 30 to 10 May 2018 in Bonn, Germany.  Parties have agreed on draft conclusions in several agenda items for consideration in the Climate Change Conference to be held in Katowice, Poland from 3 to 14 December 2018.

The Bonn session largely focused on advancing the work of the PA Work Programme (WP) to facilitate its implementation. Before Katowice session, Parties will meet in Bangkok from 3 to 8 September 2018 to further negotiate on PAWP. This note updates the negotiation of the Parties on adaptation.

On adaptation stream, SBI considered a report on progress, experience, best practices, lessons learned, gaps, needs and supports provided and received in the process to formulate and implement National Adaptation Plans (NAPs), including a report of the Adaptation Committee in accessing the readiness and preparatory support programme of the Green Climate Fund (GCF) for adaptation, and LDC Expert Group (LEG) events on national adaptation planning.  The SBI agreed to continue negotiation on NAP issues at SBI 49 (December 2018).

Parties under the agenda item on Nairobi work programme (NWP) on impacts, vulnerability and adaptation to climate change focused on human settlements and adaptation, welcomed efforts of the partners to identify, communicate and bridge priority knowledge gaps as part of the Lima Adaptation Knowledge Initiatives (LAKI), encouraged, inter alia, to continue enhancing the role of the NWP as a knowledge-for-action hub for adaptation and resilience. Parties included extreme weather events, drought, water scarcity and land degradation neutrality, agriculture and food security, forests and grasslands, and wetlands in the NWP thematic areas.

Appreciating the work of the LEG, including the NAP Expo, Parties in the agenda item 'matters related to the LDCs' agreed to continue LDC WP as decided in 2001 in Marrakech, and include new elements in the WP for consideration in Katowice session (CoP 24). Parties decided to add two key elements of the Paris Agreement in the LDC WP, namely to support the: (i) process to formulate and implement NAPs and relevant adaptation strategies, including National Adaptation Programme of Action (NAPA); and (ii) preparation and implementation of successive nationally determined contributions (NDCs). Parties agreed to continue strengthening: (i) national climate change secretariats/focal points; (ii) cooperative action on adaptation technology development and transfer; and (iii) capacity of meteorological and hydrological services; and also to continue to providing training in negotiating skills and language, promoting public awareness programmess, and supporting capacity building initiatives for effective implementation of the UNFCCC, KP and the PA in the LDCs. Parties requested the LEG to support, and encourages other relevant bodies and programmes to assist the LDCs in implementing its WP. As per the Article 4.9 of the Convention, developed countries are obliged to provide finance and technology to the LDCs. In addition, the Technical Expert Meeting on adaptation in Bonn promoted constructive exchange on adaptation planning for vulnerable groups, communities and ecosystems.

Nepal is attending all negotiating sessions and meetings right from the adoption of the UNFCCC in May 1992 in New York and CoP1 in 1995. In my previous article on 'turning points' (4 May 2018 in Spotlight), SBI and SBSTA has over 35 agendas for negotiation. In this session, Nepal returned back to the stage of 1995 in terms of participation as one-member delegation attended this Bonn session, indicating climate change negotiation a least priority of the present government. Two Nepali participants who regularly attended from Nepal delegation since nearly a decade participated on behalf of the African countries.

Nepal's work on adaptation is regularly reflected in major publications. The UNFCCC Secretariat in its Annual Report 2017 has cited Nepal's NAP process as an example that 'has taken advantage of the Convention's adaptation architecture to build strong national systems for adaptation'. It also mentioned Nepal as the 'first country to receive GCF grant' to create the NAP'. Nepal accessed the GCF resources (US$ 2.95 million) for NAP formulation in 2016 in Marrakech.

Besides NAPA preparation and implementation, the Government of Nepal received support from UK Aid through Oxford Policy Management and Practical Action, including support from ICIMOD for the NAP formulation process from May 2016 to May 2017, including previous preliminary works, and planned to continue the NAP formulation process with GCF support. Although, process for channeling funding is considered complete, accessing GCF support has been a 'tragic' to NAP process as almost one and half-year has lapsed and it is still unclear the time required from now to re-start the NAP process. Several countries are in the advance stage of NAP formulation, but the 'first country' accessing the GCF resource and initiating the NAP process is now at the 'cross-road'. Climate vulnerable people have to 'pay for delay action'.

Japan And Nepal Can Both Contribute To World Peace And Prosperity By Masamichi Saigo 3 days, 23 hours ago