60 years ago Nepal established diplomatic relations with Germany. Both countries were emerging from dark and difficult times, both were trying to establish a new identity. 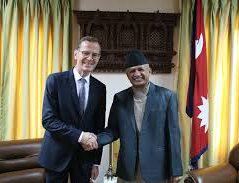 On a TV show recently, I heard a wise man say about his difficult youth: You don’t judge a life by the hand you were initially dealt. You judge a life by how you played that hand.

60 years ago Nepal established diplomatic relations with Germany. Both countries were emerging from dark and difficult times, both were trying to establish a new identity. They wanted to open up to the world and define a new place for themselves within this world.

Both countries were very different from each other, in many ways. But both wanted to actively play the hand History had dealt them, no matter what those cards said. 60 years, almost a lifetime later, let us ask: how have we both played our hand?

Look at Nepal today. It has overcome decades of profiteering by a rent seeking elite, it has overcome a decade of civil strife, it has given itself a new, democratic, republican and federal constitution, and the Nepali people have validated all this by voting massively last year, installing the most powerful government in Nepal’s modern history. This government, carried by a united party, knows it has to fulfill the promises which got it elected. It has the power and – I believe – the wisdom to reconcile the country with its past and help it look boldly to the future. Building the future on the foundation of a well understood past shared by all - this will be a process. It cannot be achieved by the stroke of a pen or the handing out of some money from state coffers. But if this process gets to a credible start now, in the coming two to five years, it will be empowering Nepali women and men like never before in History.

Look at Germany today. The country is re-united. The roughly 80 Million Germans are part of a European Union of 500 Million citizens. These 500 Million freely trade, travel, work and transfer assets among themselves.And the European Union ensures the rule of law for all and organizes the outside protection of the Union territory. Germany has established its own particular brand of foreign and security policy– not so much by talking, but by how we behaved. We have taken on responsibility such as intervening militarily against dictatorship and ethnic cleansing in the Balkans, offering the parties to the conflict the option to become members of the European Union. But we refused to participate in the invasion of Iraq at the beginning of the century.The most important point for us today: the European Union as a whole is establishing its own particular Foreign and Security policy through its High Representative, Federica Mogherini. As Germans, we are fully part of this European Foreign and Security policy.

Both countries can be proud of these achievements. From many conversations in the last nine months here, I am confident to say: It seems to feel good to be a Nepali today. And I can tell you myself: it feels good to be a German today. This is a new set of cards we’ve been dealt. Some of it we earned, most of it was luck or due to geopolitical circumstances beyond our reach. Little does it matter. What matters is:

What will we both do with it?

It is a good timing that today we finish our consultations on the next two years cycle of development cooperation between Germany and Nepal. Both delegations have worked hard in the past days, and I congratulate them on the atmosphere of cooperation and understanding which was established. Germany will continue to engage in the Health and Energy sectors and will continue to work on enabling Nepali small and medium sized enterprise for a competitive world market.

Our cooperation builds on decades of common work, decades of experiences. A lot of stories can already be told. I specifically greet the Deputy Mayor of the city of Bhaktapur, Rajani Joshi, who has come to share this moment with us. Bhaktapur may have the longest story to tell about “the Germans”, about successes in cooperation, about trust built, even after initial failures were overcome. This learning process never ends. I am happy to further engage with this proud, able city and its citizens on a cooperation that makes best use of what Bhaktapur can give to the nation and of what a modern Germany can contribute to this long standing partnership.

Cooperation is a constant learning process. Just ten days before the Government will release the national budget, and a day before the right honourable President will announce the government’s policies to the Parliament, this was the right moment to harmonize our engagement with the fundamental policies Nepal is choosing to implement. These were consultations, not yet negotiations, which we will hope to finalize in autumn. Announcements will come only then, but we are confident that the work done so far will help getting it right. So stay tuned.

Not all is government to government cooperation. We want to make Nepal a place for German and European industry to invest in. Through private sector engagement, employment will be created, durably and reliably, in this competitive world.

Warsteiner, one of the best established beer brands in Germany and in the world, has trusted the Shrestha Family with opening a brewery in Nepal. I thank Santosh Shrestha for offering his Warsteiner beer to us today. What could be more symbolic than sharing a glass of beer? This is the German way of saying: “I want to continue to be friends with you.”

And I cannot even begin thanking all those Germans and Nepali who have made friends with each other and have transformed this friendship into lasting engagement: helping to build schools, houses, hospitals, homes for sick and disabled, and updating Nepali doctors on the latest technologies. I also want to thank all those who engage in teaching our language and explain our culture – I believe all teachers of the Goethe-Zentrum are here, as well as its new director, Katrin Junken.

The Logo which will accompany all our events this year, right up to the concert from the roof of the world which we boldly plan to hold end of December, this Logo symbolizes the richness of our relation. It was designed by Neelam Bhurtel. She won a tough competition in which many excellent designs competed. Congratulations to Neelam! We will reveal your work after the Chief Guest’s speech.

Allow me to thank Nepal for extending support to Germany in the upcoming election to non-permanent membership of the United Nations. We count on your support, so that we can work for multilateral peace-making, something to which Nepal’s army is contributing so much.

Germany And Nepal Share So Many Views And Projects
Oct 08, 2018

Uttarakhand Glaciers And Recent Disaster: A Lesson To Our Countr By Dr. A.B. Thapa 1 day, 6 hours ago